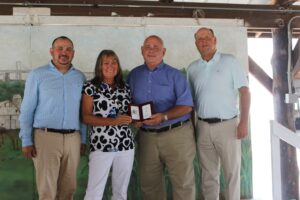 The Miller Award recognizes individuals for outstanding service to Maryland’s grain industry. The award began in 1998 when it was given to Dr. James R. Miller. Since then, grower leaders, as well as elected officials, researchers, and agency representatives have been recognized. This year’s recipients were Brad Powers, former Deputy Secretary at the Maryland Department of Agriculture, and Valerie Connelly, former executive director of Maryland Farm Bureau.

“The inception of the Maryland Grain Producers Association might have been very different if it hadn’t been for Brad Powers,” Lynne Hoot, former MGPA executive director said in presenting the award to Powers.

Powers grew up on a dairy farm in Harford County and became an Extension agent in 1969 in Talbot County. In 1976, he joined the Maryland Department of Agriculture as a marketing specialist and one of his first tasks was gathering key gra 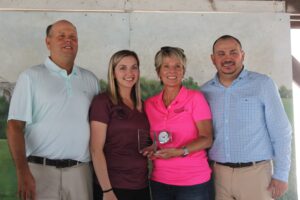 in farmers together to discuss the formation of what is now MGPA.

Powers said the get together was a goose hunting trip, spurred by Kent County farmer Allie Messer, only there weren’t any geese to hunt on that particular day.

“We were in that pit for a long time with nothing to do but talk,” Powers said. “So we stood there watching the sky and talking about what we could do to get grain producers a better voice in the legislature and other places. Out of that came the Maryland Grain Producers Association.”

“During his term at MDA, he became very much the go-to person for any agricultural organization which included the Maryland Grain Producers and Maryland Soybean Board,” Hoot said.

Speaking to the Commodity Classic crowd, Powers said receiving the Miller Award was “wonderful” and helping to get the association off the ground and thrive was “one of the greatest things I think I’ve ever been able to do in my work and livelihood.”

After his retirement from MDA in 2002 as the department’s deputy secretary, Hoot said Powers kept serving the grain industry. He was involved in the development of two soybean transloading facilities and investigation of potential sites for an ethanol plant in Maryland. He also served as the director of Shore Gourmet, a value-added food business development program. Powers also assisted with a USDA technology transfer project looking in to converting chicken feathers into biodegradable plant containers and turfgrass netting. Powers now lives in Carrollton, Georgia with his wife Shari.

Connelly has been serving Maryland’s agricultural community for the last 25 years, working for the Maryland Farm Bureau as Director of Government Relations and most recently executive director.

“To say Val has done it all would be an understatement,” said Lindsay Thompson, MGPA executive director. “She has been involved in every major issue impacting Maryland Agriculture for the last quarter century and has done an exceptional job representing the best interest of our industry.”

Thompson said Connelly has been integral in protecting the privacy of farmers’ nutrient management plans, retaining access to pesticides, expanding the radius for k-tags, increasing the weight tolerance for grain trucks, ensuring conservation funding among many other accomplishments for Maryland farmers.

Connelly recently transitioned to a new position at Choptank Electric Cooperative but said with so many farmers and Farm Bureau members involved with the co-op, she’ll still be able to help the agriculture community.

“I’m surprised and certainly touched. I’ve enjoyed working with Lindsay and everyone in the agriculture community,” Connelly said, receiving the award. “I look forward to working with all of you well into the future.”