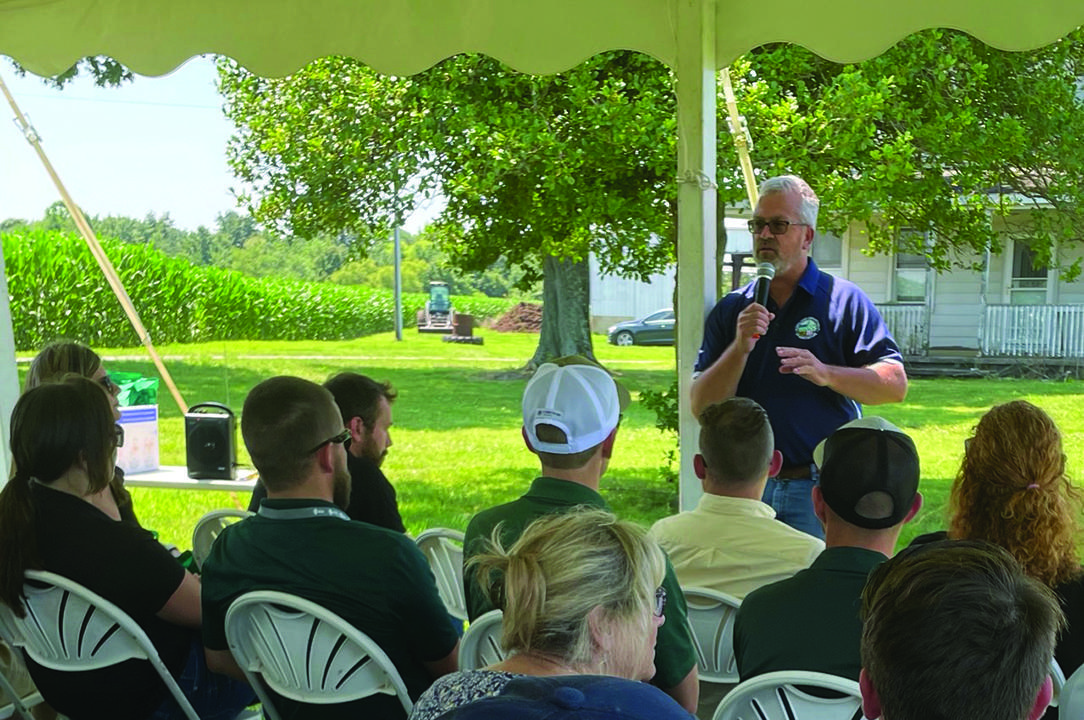 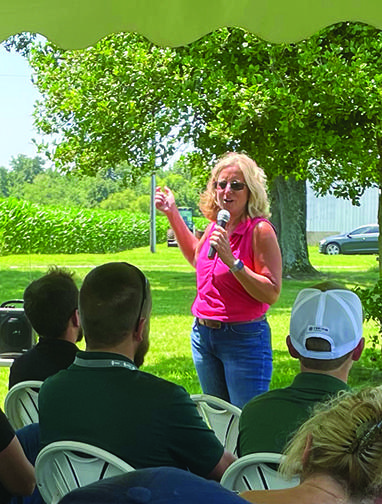 Jennie Schmidt and husband Hans, top, addressed a group of Midwestern grain farmers at Schmidt Family Farms in Sudlersville, Md., on July 12. The group visited Queen Anne’s County as part of a four-day trip to the Washington region to learn more about the national grain industry. (Photo by Jonathan Cribbs)

SUDLERSVILLE, Md. — When a large busload of grain producers from the Midwest visited their farm on July 12, Jennie and Hans Schmidt spent about an hour explaining the peculiarities of agriculture in the Delmarva region.

Crop diversity and environmental regulation took up much of the time. Across 1,900 acres, Schmidt Family Farms raises grain, produce, livestock and grapes for regional wineries.

“(We’re) trying to diversify, add value to the acres that we grow,” Jennie Schmidt said to the group as they sat under a large white tent several feet from the operation’s small vineyard. “Because — I’m sure it’s true everywhere — picking up more acres by sale or by rent is pretty competitive, and so while we’ve put bids in on things, we haven’t really increased the number of acres that we farm in the last few years.”

The Schmidts’ Queen Anne’s County farm was one stop on a four-day trip for farmers with the Iowa Corn Growers Association, the Iowa Corn Promotion Board and similar grain associations from Nebraska, Michigan and Missouri, said Carrie Dodds, director of grower services at the both of the Iowa corn groups. Many of those growers were part of I-LEAD, a program started by the growers association to develop future leaders within Iowa’s grain community. It’s in its 10th year.

“It’s just to broaden their horizons and see another aspect of the ag industry,” Dodds said. “These are all young leaders that want to get involved in some facet or another.”

In addition to sightseeing in Washington the group visited Godfrey’s Farm, a fellow produce farm in Sudlersville, and an organic dairy in the region. They arrived Monday and flew home Thursday, Dodds said. Hans Schmidt, a farmer who also serves as assistant secretary of resource conservation in the Maryland Department of Agriculture, spent much of the group’s hour-long visit to his third-generation family farm discussing the state and federal government’s Byzantine approach to regulating nutrient applications on regional farmland. He explained cover crops, manure transportation, cost-sharing, soil testing and nutrient management plans.

“Compliance is very, very important. Compliance, again, is a very big needle driver to helping meet our (watershed environmental) goals,” he said of the state’s periodic soil testing of farms. “We don’t want to fine farmers; we want to make sure farmers are in compliance. … Farmers need to keep very meticulous records on the nutrients they apply.”

Midwestern farmers should prepare themselves for similar regulations in the future, he said.

After the meeting, the farmers were allowed to briefly walk the vineyard before filing back onto the bus to head to Godfrey’s. Kailey Ziegler, 19, was visiting with the Nebraska Corn Board and said she was impressed with the region’s agricultural diversity.
Her state’s farming community might be able to take some regulatory pointers from Maryland, she said. Water conservation is also a particular concern in her state.

“The amount of rain here is insane compared to what we get in Nebraska,” she said.

On Thursday, July 14, the group visited the Moroccan embassy in Washington regarding a future trip abroad, and the farmers broke into groups and lobbied congressional representatives, Dodds said.

“The good news is, as of this morning, they were still excited,” she said shortly before she boarded her flight back to Iowa.