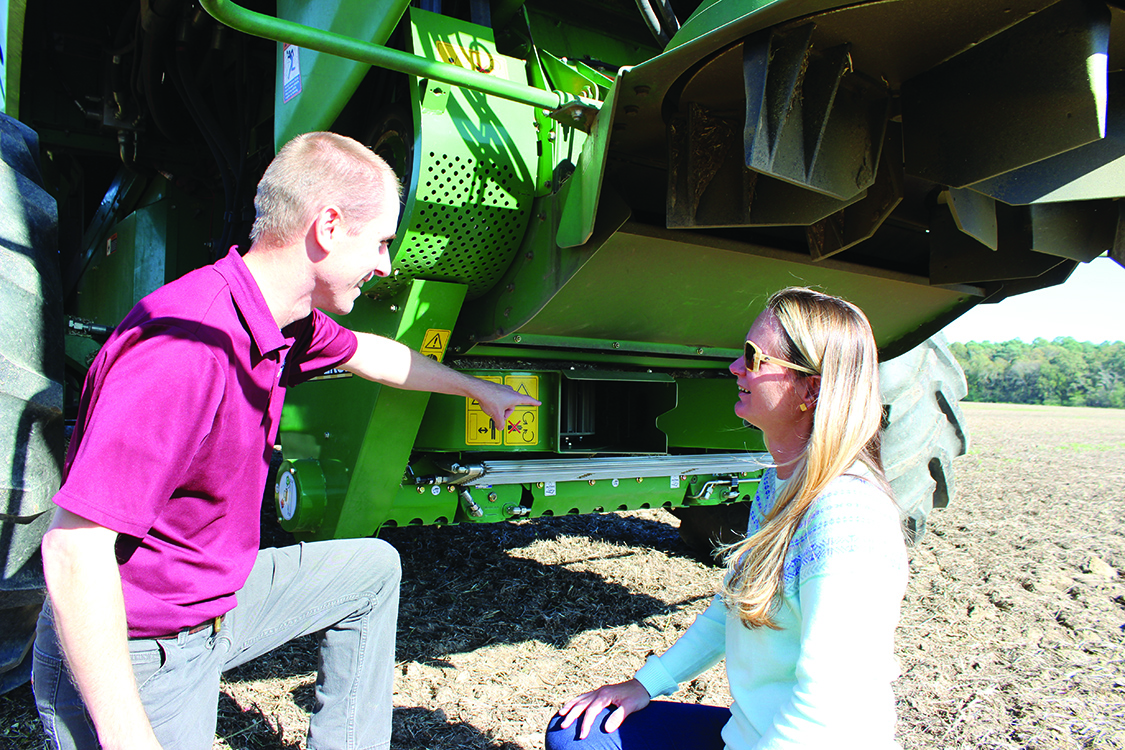 MACHIPONGO, Va. — For as much frustration as herbicide-resistant weeds cause farmers year after year, they may at times have visions of beating the plants to death.
The Shockley family, cooperating with Virginia Tech researchers, is doing just that.
Farming in Northampton County of Virginia’s Eastern Shore, Bill Shockley and son Tom recently started using an integrated weed seed mill attached to the back of one of their combines to smash weed seed as it goes through the machine during soybean harvest.
As harvested soybeans are separated from the plant material, weed seed and chaff is directed to the Redekop Seed Control Unit’s hammer mills that crushes the seeds.
“It’s kind of that revenge mentality,” Dr. Michael Flessner, Extension weed science specialist said with a grin while watching the combine cut its way through one of Shockley’s fields. “Just go get ‘em.”
In the first year of a 3-5 year study, researchers, led by Flessner, are measuring the surviveability of weed seed that goes through the mill, data on the residue overall, and what impact using the mill has on operating the combine, especially fuel use, horsepower needs and ground speed.
He said they will also collect data during wheat and barley harvest and see how the machine performs in corn as well.
He said recent studies show a 90 percent or better kill rate on weeds. Some manufacturers say 99 percent.
Along with the Canadian-made Redekop unit, there are two other manufacturers in Australia, the Harrington Seed Destructor and Seed Terminator.
“All the data to date shows all of them are right there with each other in killing the weed seeds.” Flessner said. “Basically, if it gets to the mill, it’s dead,” Flessner said.
Price on the equipment ranges from $60,000 to $80,000, depending on the manufacturer.
Flessner’s seed mill research is focused on common ragweed, Italian ryegrass and Palmer amaranth, three species that have had tremendous increases in herbicide resistance and are weeds that still have seeds attached to the plants at harvesttime.
“Over the past five years we’ve had way more weed resistance,” said Ursula Deitch, Northampton County ag and natural resources agent, who connected Flessner with the Shockleys on the project. “It’s become a huge issue.” Deitch said even farmers who have been more diligent about weed control are seeing resistance pop up in their fields.
“I have a lot of growers who are very interested in the outcome of this to see if it will work for them,” Deitch said.
Deitch and Flessner said the Shockleys emerged as ideal cooperators since they weren’t trading in their combines every year so the mill could stay on the same machine and they had the right make and series combine that matched up to the Redekop mill’s specifications.
To the researcher’s knowledge, it’s the only seed mill in use on a commercial farm on the East Coast.
“We’re excited to have this here on the Eastern Shore,” Deitch said. “We are the No. 1 and No. 2 counties in corn, wheat and soybeans in the state. To have cooperators like Bill and Tom is really great.”
Bill Shockley said he was interested in using the seed mill to see if it can reduce the amount and cost of herbicide used annually.
He said in the last five years, he estimates a 20 percent increase in herbicide cost because of resistance.
“With the price of crops now, you’ve got to look at alternatives,” Shockley said. “When (Ursula) called me, I said, ‘Let’s hook it up.’”
Brad Ashby, who operates Shockley’s seed mill-equipped combine, said operating with the mill running is louder and it draws more power form the combine but “it’s nothing the machine can’t handle.”
Working with technicians from Atlantic Tractor, Ashby said it was a two-day job to attach the seed mill, but overall pretty simple to install.
“It was all nuts and bolts, plug and play,” Ashby said.
Flessner said adding a seed mill won’t likely replace a farmer’s herbicide program completely, but could reduce how much is applied in season.
“It kind of has to be an integrated approach,” he said. “I don’t think we’re going to eliminate herbicide for the mills.”
The seed mill study is part of Flessner’s broader look at harvest weed seed control which includes a chaff lining study in Brunswick County, Va.
In chaff lining, a baffle installed on the combine concentrates the chaff and seed residue into a narrow strip in the field that can then be managed separately.
Though the seed mill is a rarity now for the region, Flessner said a 2020 USDA National On-Farm Conservation Innovation Trials Grant award is putting more weed seed mills on farms in 8 states including Delaware, Maryland, Virginia and North Carolina as early as next year.
And as the seed mill on the Shockley’s combine operates, a lot of people, Bill Shockley among them, will be watching and waiting.
“I’m real anxious to see what happens here,” Shockley said. “It’s something different. It’s a different tool.”