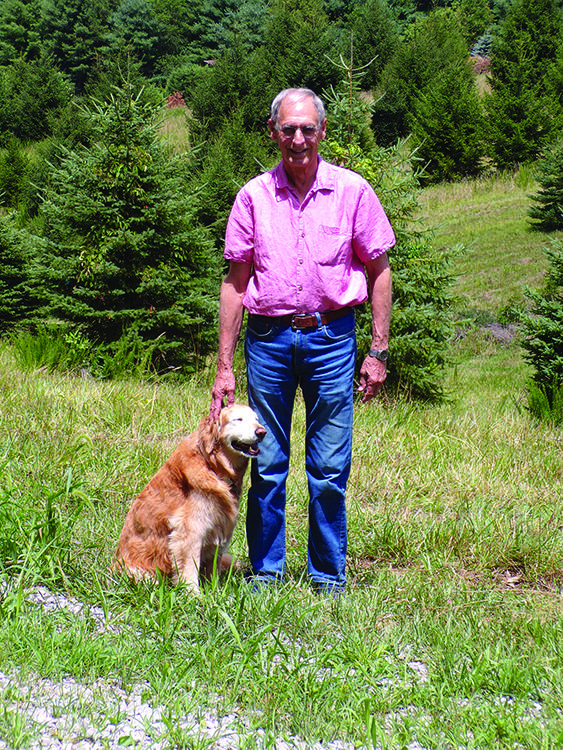 Greg Miller may be retiring and closing Willow Springs Nursery but he will still be enjoying some of the trees he has planted on the hills of his home farm in Montgomery County, Va. farm. (Photo by Jane W. Graham)

RADFORD, Va. — Not able to find someone to take over his operation, Greg Miller, a leader in growing trees in Virginia, at his retirement, is choosing to close the doors on his Willow Springs Nursery.
Miller and his wife Deb talked about his retirement during an interview at their home in Montgomery County, Va.
Their wholesale ball and burlap or B and B operation has supplied trees to buyers throughout the East Coast and as far northwest as Ohio and Illinois.
He noted that they are not the only tree farmers of his generation that are getting out of the business. It is the generation that started in the 1960s and make up a core group of producers.
“The trees are getting heavier and we are getting older,” he said.
He said the Willow Springs nursery’s stock has consisted of about 90 percent conifers. Deciduous trees have also been an important part of the nursery.
The Millers said they see Greg’s retirement and closing of the business as part of a trend in the industry.
A major factor is that there is no second generation to take over the business, do the hard work involved and spend the time it takes to grow the trees.
Greg traced his career back to his days at Virginia Tech in the late 1960s when he worked part-time with his brother Jeff at Laurel Creek Nursery, a business founded by two Virginia Tech professors. It launched the Miller brothers into careers in the industry in several ways.
In time, the brothers split Laurel Creek into two businesses; Jeff took the retail garden center and Greg became owner of the wholesale side.
Jeff also worked as the executive director of the Virginia Christmas Tree Growers Association.
Greg said the industry and its demands are different than when he started out with Christmas trees around 1975. That was when white pines were king, he said. Since then, demand has transitioned to Fraser firs.
As the business grew so did Greg and Deb’s family.
They have four children including twins. Those young adults have found work in other fields.
The very nature of a tree calls for a person with patience and persistence to be the tree farmer.
For Christmas trees, Greg said it takes at least eight years for a tree to be ready for sale. Larger trees used in public settings take much longer and are much harder to handle.
The Millers ran out of trees three years ago.
They decided about eight years ago not to plant anymore and cut their last Christmas tree last year.
But, as is often the case with change, the industry has been surprised by an unlikely player, a pandemic. In the last three years, demand has grown as people stayed at home and fixed up their landscaping, Greg said.
The pace of growing trees has changed as well, he continued. It used to be very seasonal and not greatly demanding.
“That has changed,” Greg said. “It is almost like dairy farming. You have to be there.”
He could speak with authority about that having grown up on a dairy farm.
The culture of the buyers makes tree farming stressful. Folks outside the industry are used to instant everything and want their trees when they order them.
While he is closing Willow Springs, Greg is not selling his home farm that surrounds their beautiful and unique home and plant-filled grounds.
“He’s going to miss it,” Deb interjected, when he was asked what it is going to do now.