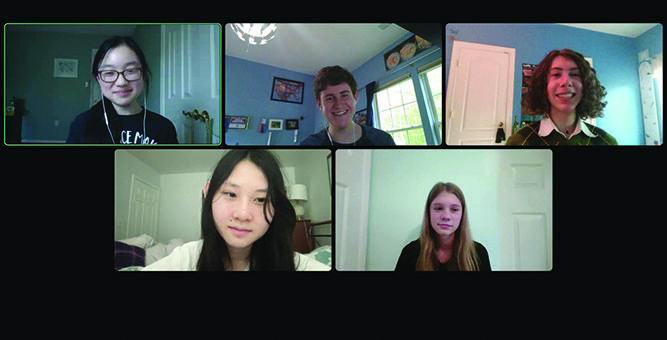 ANNAPOLIS, Md. — A team of five students from Richard Montgomery High School in Montgomery County won the 2021 Maryland Envirothon, held virtually from April 26-29. More than 50 teams with about 250 competitors from 13 counties across the state participated in the 30th annual competition. That’s more than double the number of teams in past years under and in-person format, according to Craig Hartsock, Maryland Envirothon coordinator.
“Since this year’s contest was held virtually, we allowed as many teams as wanted to compete,” Hartsock said. “In normal years, we would just allow the winning team from each County Envirothon to compete, so we typically only have around 20 teams each year at our state event.”
The Maryland Envirothon is an annual natural resources competition that challenges students to identify and categorize living resources, perform soil surveys, and solve other complex natural resource issues. Each team’s knowledge is tested under the supervision of foresters, soil scientists, wildlife specialists, and other resource professionals. Teamwork and problem-solving skills are evaluated as each team works to address the environmental challenges presented. The team with the highest cumulative total wins the competition and the opportunity to represent Maryland at the national competition.
This year’s winners were announced at a special virtual awards ceremony on May 6.
At this year’s Maryland Envirothon the Montgomery County Team A scored 372 points out of a possible 400. They placed first in each of the four categories of the event — soils, forestry, wildlife, and aquatics. The Changing Tides team from Harford Christian School placed second with 348 points and the Monsteras team from Allegany High School placed third with 338 points. The Southern Stoneflies from Southern Garrett High School and Richard Montgomery High School’s Team B rounded out the top five.
The winning Richard Montgomery High School Team A members Lynna Deng, Connor Palansky, Josh Goozman, Katie Yong, and Sienna Burns will go on to represent Maryland at the National Conservation Foundation Envirothon scheduled for July 25-28. More than 40 teams from the United States, Canada, and China are expected to compete for the national competition being held virtually this year.
“It is encouraging to see student interest in natural resources and environmental studies at an all-time high,” said Secretary Joe Bartenfelder. “Each year, the Envirothon inspires the next generation of leaders in science, technology, engineering, and mathematics. Kudos to all those that participated and congratulations to the winning Richard Montgomery High School team. Best of luck to the students representing Maryland at the national competition later this summer.”
Members of the top three teams were awarded wildlife prints and scholarships from $200 to $500 from the Maryland Grain Producers Utilization Board Scholarship Program.