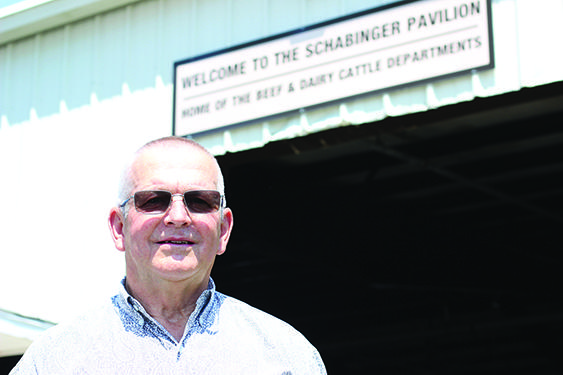 Bob Moore’s history with the Delaware State Fair goes back to 1962 when he first exhibited Ayrshire dairy cattle. In the decades since, he’s joined the ranks of the fair’s organizers with multiple volunteer roles in the livestock department. (Photo by Sean Clougherty)

HARRINGTON, Del. — Bob Moore, chairman of the Delaware State Fair’s livestock committee knows the perspective of the exhibitor — he’s been one himself since 1962.
That year, his two Ayrshire calves didn’t place well in the show, but Moore was undeterred and four years later, he exhibited the Grand Champion Ayrshire in 1966.
“That was certainly a highlight, especially with the first two being at the bottom,” he said. “I just liked the Ayrshire cattle and stayed with them and I’ve stuck with them all along.”
Over the last 60 years, Moore, 75, has been stuck with the fair, too — seeing it undergo extensive changes and growth and as livestock committee chairman and dairy department superintendent — he has worked to ensure farm animals continue to be a key component of the statewide event.
Growing up on a dairy farm in Bear, Del., Moore recalled the two-hour trips it would take to bring his and his sisters’ livestock exhibits to the fair.
“Once you got here, you were here for the week,” he said.
In those earlier years, several wooden barns on the fairgrounds kept the dairy breeds separate.
“We couldn’t mix them up for some reason,” Moore said with a grin. “That was frowned upon back then.”
But those barns are long gone, replaced by the large buildings that house animals during the fair.
“We certainly have a showplace now, no doubt about it,” he said.
Moore noted the increase over the years in junior exhibitors with market animals and said it’s a good way for youth to get started with livestock.
Over the last 10-12 years, entries for all livestock have been relatively consistent, he said, although goat entries saw a steady increase before that and now, youth leasing dairy heifers appears to be on an upswing with junior exhibitors. This year, the fair will have 625 goats, 250 dairy, 110 beef, 450 sheep and 300 hogs in its shows — all numbers Moore can recite off the top of his head.
“It’s good to have this many exhibitors,” he said. “That’s quite a good feeling to see the kids stay involved with it.”
After showing dairy cattle in the fair for several years, bringing about 20 head in some years, Moore stepped up his involvement in the fair, joining the ranks of the fair’s organizers as a member of the fair’s board of directors in 1975, a seat he still holds. Soon after he became assistant superintendent of the dairy department in 2005, he became chairman of the fair’s livestock committee and five years ago, became the superintendent of the Dairy Department.
Along with that, Moore works with exhibitors and farmers throughout the year as the Delaware Department of Agriculture’s poultry and animal health inspector supervisor.
Moore said the roles come with a lot of responsibility but he doesn’t view it as high-pressure or stress-laden. When issues pop up, he said the key is to be fair across the board and communicate with exhibitors honestly and in a straightforward way. They may not always like the message but usually appreciate how it’s delivered, he said.
“The key is we have to do that for everyone,” he said. “To me, that’s really important.”
Fair organizers that work closely with Moore said his mild-mannered-but-direct approach is known throughout the livestock buildings of the fair and around the state.
“I’ve never seen Bob Moore get mad,” said Doug Crouse, longtime fair treasurer and Delaware state 4-H program leader. “I’m sure he has, but I’ve never seen it. He’s just calm and he listens.”
“Bob is a wise, patient, dedicated and respected go-to individual at the state fair for any and every livestock issue whether it relates to a livestock exhibitor issue or an animal health issue,” said Susan Garey, Delaware Extension livestock agent, who also sits on the fair’s board of directors. “Because he treats people with respect, he receives that in return.“
Garey said Moore’s support of livestock exhibitors, especially youth, extends well past the ten days of the fair.
“I cannot begin to guess the number of last minute health paper requests Bob has probably fulfilled in his ‘day job’ which facilitated a child’s participation in an out of state livestock show,” she said. “Nor can I begin to imagine how many ear tags Bob has put in the ears of market animals at our state fair livestock tagging days each May over the duration of his career with the state fair.”
In the weeks leading up to the fair, Moore and his animal health inspector team visit about 80 percent of the farms that will be bringing livestock to the fair, ensuring healthy animals will be on display for the public and livestock owners are doing what’s needed for their animals. The rest are inspected when they arrive on the fairgrounds.
“He will go to extremes to make sure people are taken care of,” Crouse said. “He goes at all times, at weird times. He just gets it done.”
Crouse added along with making sure exhibitors follow the rules, a superintendent also needs to be their voice to fair management when there are issues or concerns.
“There’s so many aspects to it,” Crouse said. “You need the person who will be the eyes on the ground. You’ve got to bring up conversations. He’s a good advocate for that department and a superintendent needs to be that advocate.”
Like his early years as an exhibitor, the fair is still a family experience for Moore. His wife Karen is there helping and handles the decorations for their exhibitor area.
Both of their daughters, Laurie and Leslie, showed dairy cattle and now Moore’s grandchildren Angelina and Colton are carrying on the tradition.
He said one of the things he enjoys most about staying involved in the fair is seeing them, like all the other exhibitors, work hard and succeeding. That extends past the show ring, too, he said. “You learn those responsibilities and I think those things have helped me through my life,” Bob said. “I try to instill that in my children and grandchildren.”