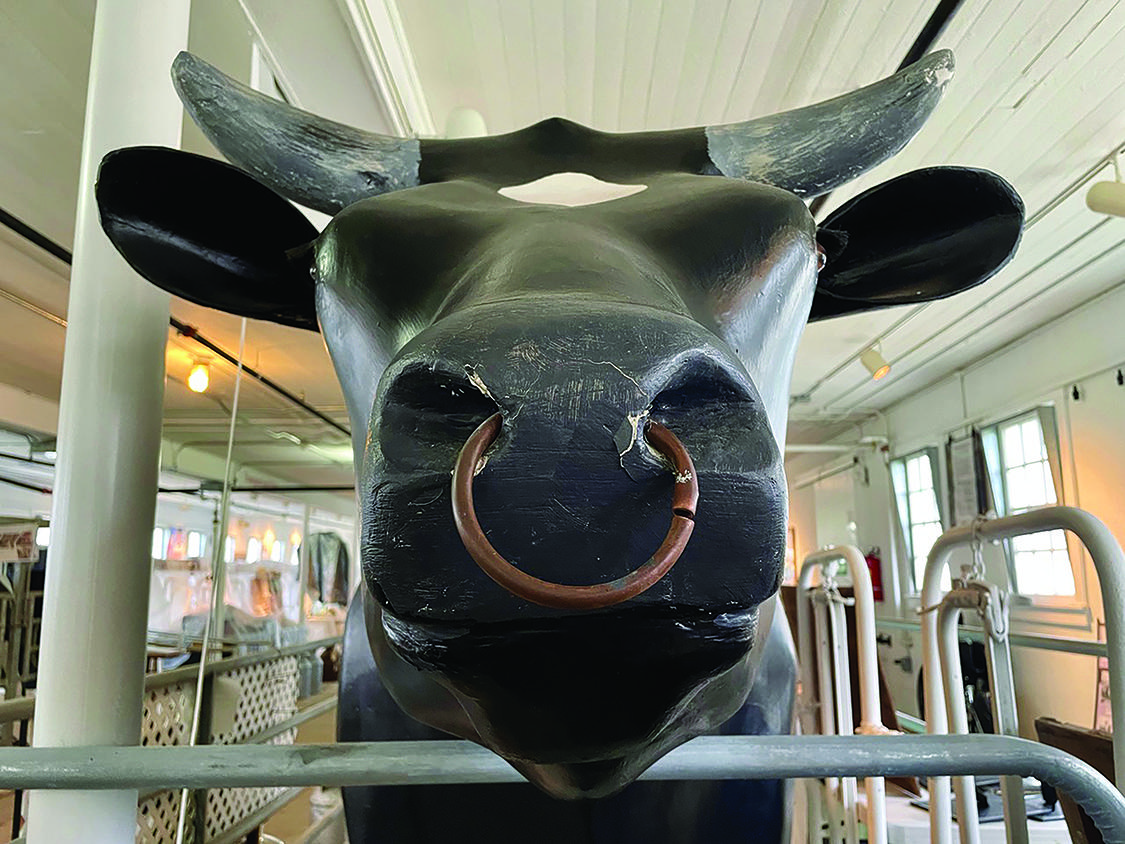 The modeled head of Paclamar Astronaut, a legendary Holstein dairy cow purchased by a group of farmers from Montgomery County, Md., that eventually earned millions of dollars on the breeding market. An exhibit on the cow is part of the MOOseum at King Dairy Barn in Boyds, Md., which recently reopened after the pandemic interrupted service. The museum is dedicated to the county’s dairy history. (Photo by Jonathan Cribbs)

BOYDS, Md. — To Garner “Bill” Duvall, the MOOseum at King Dairy Barn is a repository of stories. Take for instance the story — represented in the barn by a giant model bull — of Paclamar Astronaut.

In 1964, dairymen from across the country gathered in Washington, D.C., for a Holstein convention. A group of Montgomery County farmers had pooled about $15,000 for an associated cattle sale in Gaithersburg, Md., to make a purchase of their own.

It turned out to be a 6-month-old calf named Paclamar Astronaut from Greeley, Colo.

“One guy looked at this calf and he said, ‘This is the ugliest (darn) calf I’ve ever seen in my life; I’m out of this thing,’” Duvall said.

With his departure, the farmers’ money pool shrank, but they managed to snag the calf for just $9,000 —  an amount that could have purchased an entire house at the time. A year later, the group began selling the bull’s semen through an Illinois breeding firm.

“Those fellas had no idea what they’d done,” Duvall said.

Milk production records from calves bred from Astronaut were stellar, and demand for the bull’s services skyrocketed. By the time Astronaut’s breeding contract expired, each farmer in the group made nearly $1.4 million. Over the course of his life, the bull made the front page of the Wall Street Journal — twice.

“It was like hitting the lottery in those days,” Duvall said. “That bull made Montgomery County famous.”

Astronaut died at the age of 14 in the late 1970s, but his bloodline continues to this day. It’s the kind of story that Duvall and Peg Donnellon, president of the museum board, enjoy telling to about 3,000 yearly visitors and students seeking a deeper understanding of the county’s dairying legacy.

“(Donnellon will) ask the kids, ‘Where do you think milk comes from?’ and usually it’s Safeway and Giant,” said Duvall, the museum’s facilities manager and one of its hobbyist historians.

The two of them take students through a series of exercises and lectures to combat those misconceptions. They shake a jar of cream to see how it turns to butter. They learn how to milk a cow using a model with fake teats. They discover how much milk a cow produces in a day and the amount of water it has to drink. (About 35 gallons or a bathtub of water daily.) They review life in the day of a dairy cow.

“When they leave here they have the education about a cow on a farm and where they get their milk from,” Duvall said.

The museum reopened earlier this month after the pandemic interrupted its service and school group visits ended. It’s open every Saturday, May through October, from 10 a.m. to 3 p.m., and on the fourth Sunday of each month from 1 p.m. to 4 p.m. Admission is free during regular visiting hours while school groups are charged a fee.

The MOOseum was founded in 2010 following a history that begins when James King — Duvall’s grandfather — purchased a 350-acre farm between Germantown and Boyds from the Lyddane family in 1913. Despite a fire that destroyed much of the farm in 1926, it largely flourished before it was purchased by the Maryland-National Capital Park and Planning Commission in the late 1960s and then by Montgomery County. The farm was eventually developed into a county park and soccer complex, but several of its buildings were preserved, including the dairy barn that houses the MOOseum.

Inside the facility, visitors have the opportunity to glance at all kinds of dairy artifacts from the county including an antique milk carriage from Dairy Maid Dairy in Frederick, a large collection of old milk bottles used in the county, a scale model of the original farmhouse and all sorts of other equipment including antique cream separators and dumping stations. But an office attached to the dairy barn also holds a growing chronicle of dairying in the county — individual histories of nearly 600 dairies, only 300 of which were known when the museum first opened.

“That’s all original research by our members going through newspapers and land records and census records to get the information — and talking with families who give information about their families’ farms,” Donnellon said.

Duvall, who has compiled many of those histories, recalls from memory the unlikely story of Allie Messer, born in Oklahoma in 1914. He was an orphan and an uncaring stepmother drove Messer and a sibling east, dumping his sister in Washington, D.C. On her return to Oklahoma, the stepmother left Messer at a West Virginia farm that agreed to take him on as a laborer.

In some ways, they were lucky. At the time, children from cities along the East Coast were being placed on so-called “orphan trains” and shipped west, often to growing farms that needed labor. Messer eventually made his way to Montgomery County, hooking up with another family and developed into a well-known dairy cow breeder who bottled and shipped his own milk.

“He had great cows. He was a good herdsman,” Duvall said.

“Somehow Ali got with people who not only helped him develop a good work ethic but helped him along so that he knew what he needed to do to get his own farm and to become a successful farmer,” Donnellon said.

There are many such stories in binders that line the museum’s office and are available to anyone who wants to make an appointment. Duvall and Donnellon described their work, assisted by volunteers, as an increasingly essential task in a once well-regarded dairying county whose dairies have largely disappeared.

“It’s not a good feeling in some ways. It makes trying to raise money for our budget, it’s a challenge,” Duvall said. “But we consider an important challenge and believe in what we’re doing.”

The history of these farms in many cases remains relevant today. Paclamar Astronaut, for instance, produced more than 50,000 registered daughters and is credited with significantly improving the genetics of the world’s Holstein dairy herds — cows that produce milk potentially consumed by visitors to the museum.

“I think it’s a great place for people who aren’t even connected to dairy because it’s connected so much to the community that people learn about where they live,” Donnellon said. “It’s just a wonderful place.”

CORRECTION: This article initially mischaracterized the sale at which the bull Paclamar Astronaut was purchased. It was a sale held yearly in association with the National Holstein Convention in Washington, D.C. The article also misstated the bull’s sale price, which was $9,000. The story has been corrected online.