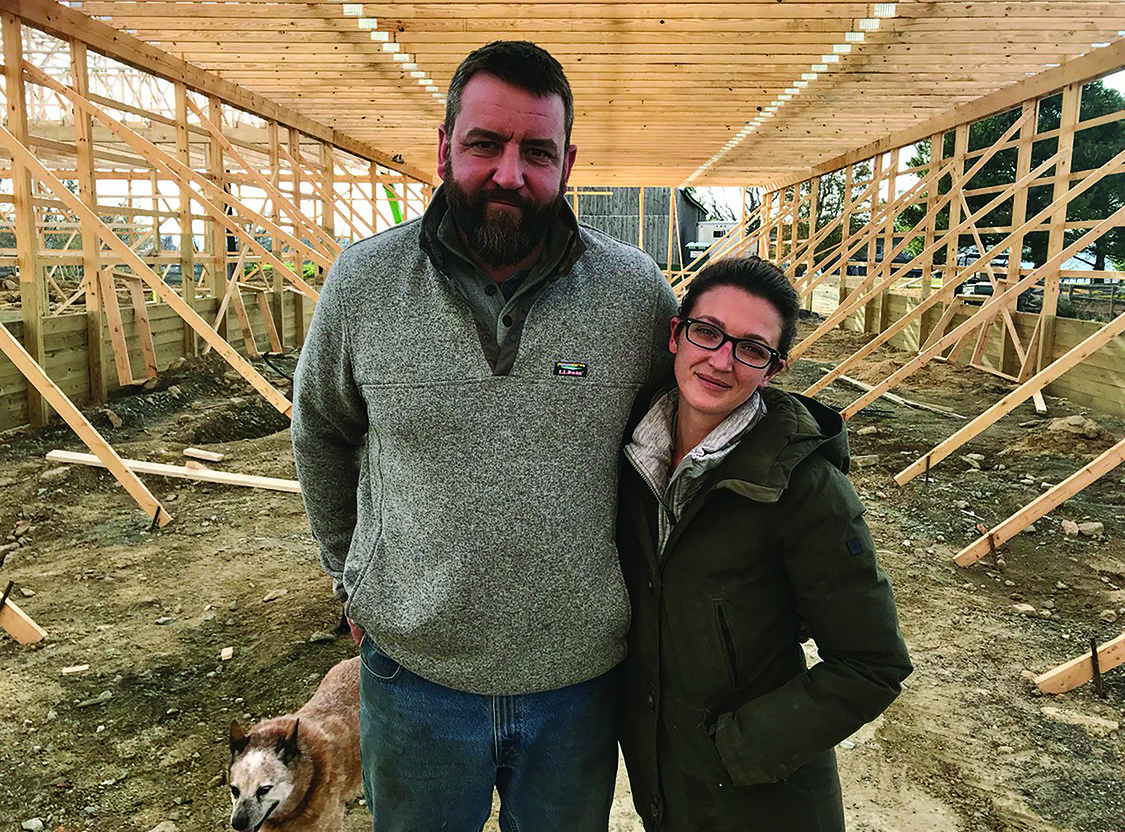 Louis and Grace Merryman, owners of Anchor & Hope Farm in Port Deposit, Md., pose inside the frame of a new horse barn under construction on their farm in 2019. (Photo by Jonathan Cribbs

More than $34,000 has been raised for two Maryland horse breeders whose baby has been hospitalized in Boston after it was born prematurely at 24 weeks.

Max Merryman, the son of Grace and Louis Merryman, owners of Anchor and Hope Farm in Cecil County, was born during the holidays while the Merrymans were visiting family near Boston. Max was delivered via Cesarean section and is receiving care at Tufts Medical Center in Boston with the goal of eventually moving him to The Johns Hopkins Hospital in Baltimore.

Liza Hendriks, Louis’s cousin, created a fundraising page for the couple on GoFundMe on Dec. 27 and the page has accepted donations ranging from $25 to $1,000. The Merrymans’ copay alone is expected to exceed $250,000.

“It’s a tough time, but they’re staying positive,” said Hendriks, who co-founded Wanamaker’s online Thoroughbred auctions. “Max is able to hear things, so Louis has been up there reading to him a lot.”

Max’s medical complications are the most recent in a series of setbacks for the Merrymans. A 90-year-old barn at the Port Deposit horse farm burned to the ground in August 2019, just two years after the couple married. The fire forced Anchor and Hope Farm to quickly (and privately) sell 10 yearlings it had planned to auction in the fall, and a year of income on the farm was lost.

“If you think of us as crop farmers, yearlings are our crop, and we were not able to go to market this year, and that was pretty devastating,” Grace Merryman told The Delmarva Farmer several months after the incident. Imagining, a grade 1 winner and millionaire housed at the farm, was injured in the fire and nursed back to health. Unfortunately, the 14-year-old was euthanized Aug. 23 due to complications from colic.

With foaling season about to begin, Grace Merryman would typically be on full watch and working nights, Hendriks said. Louis Merryman plans to fly back and forth between the farm and Boston as much as possible.

Some of the farm’s customers have donated to the family.

“Climax Stallions entrusts the Merryman’s with our horses and they are not only great horse people but even better humans,” wrote Sean Feld on the GoFundMe page with a $1,000 donation.

Anyone interested in donating can do so at https://www.gofundme.com/f/donate-to-help-louis-and-graces-son.