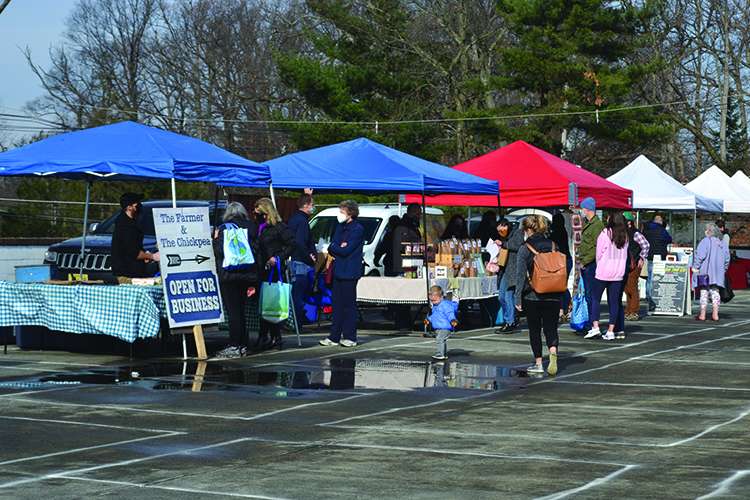 MORRIS TOWNSHIP — The decidedly un-winterlike weather on Sunday, Dec. 13, made the Morristown Winter Farmers’ Market feel more like a summer market.
After several years in Alexander Hamilton School in Morristown, the market, run by Grow it Green Morristown, needed a venue with more opportunity to social distance during the pandemic, Christine Volinsky of the market board said.
The winter market started at Fosterfields where it spent three years before it outgrew the venue, Volinsky said.
Barbara Buda, one of the founders of the market said the Morris County Park Commission stepped up in 2012 when the market was first proposed and had no sponsors, but the site just didn’t work anymore. The market was once a month at Fosterfields then went weekly at the school, which would not have been possible because of the park’s schedule.
Buda reached out to Kendrya Close, executive director of the Foodshed Alliance, which operates a summer market in Blairstown, and the alliance got them set up at Alexander Hamilton. The Foodshed Alliance was involved for a year but they remained at the school for four years.
Winter Market Manager Andeana Gonzales was staffing the Grow it Green table at the market. She said the Morris Museum was willing to lend out its upper parking lot to solve the organization’s problem.
The lot is big enough to social distance and the vendors were cooperative and efficient at doing so, she said.
There were 21 vendors on Dec. 13. Gonzales said the number hovers around 20-23 could be accommodated with social distancing.
Grow it Green does not operate the summer market in Morristown.
Volinsky served on the Grow it Green board during some of these transitions, then took a mandatory year off. She’s going back on in January.
Besides the market, Grow it Green operates a garden at the end of Hazel Street on the site of an old playground owned by the Morris School District. During normal years, school children visit the little farm on just more than an acre of land to help with planting then sample the vegetables when they are ripe. Volinsky said the children learn about botany and nutrition. Many are not too knowledgeable about fresh vegetables, she noted.
“There is a gap in knowledge about farming,” she said. “A gap between generations.” She said “Farmer Tina,” Tina Miller, who does educational programs for Grow it Green, “is so creative and knowledgeable in the classroom and on the farm.”
Of course there hasn’t been classroom learning this year, or field trips.
“In normal years we have upwards of 1,000 kids for field trips over the summer,” Miller said as she stood at the Grow it Green table selling mushrooms. She also runs a “Mommy and Me” program on Fridays for 25 children and their caregivers. They come to the farm for a story, a tour and a craft, all the while learning where food comes from.
“Otherwise, we would have to depend on their parents teaching them,” she said.
She loves making connections with the children who visit the farm, she said.
Miller said Grow it Green will work with any local school and does have one school from Dover come to programs. This year she created 25 YouTube videos.
“I learned iMovie real fast,” she admitted.
Miller has a background in geology then became an environmental education teacher. When she had three children under the age of two, she turned to part-time work but always kept a garden.
“I love making connections with kids,” she said, noting they are always excited about pulling a carrot out of the ground. She gets permission from caregivers to expose the children to new foods.
The market was busy with some regulars and others who were visiting the Morris Museum and decided to check it out. Many visitors brought their dogs who were busily making friends in the spring-like sunshine.