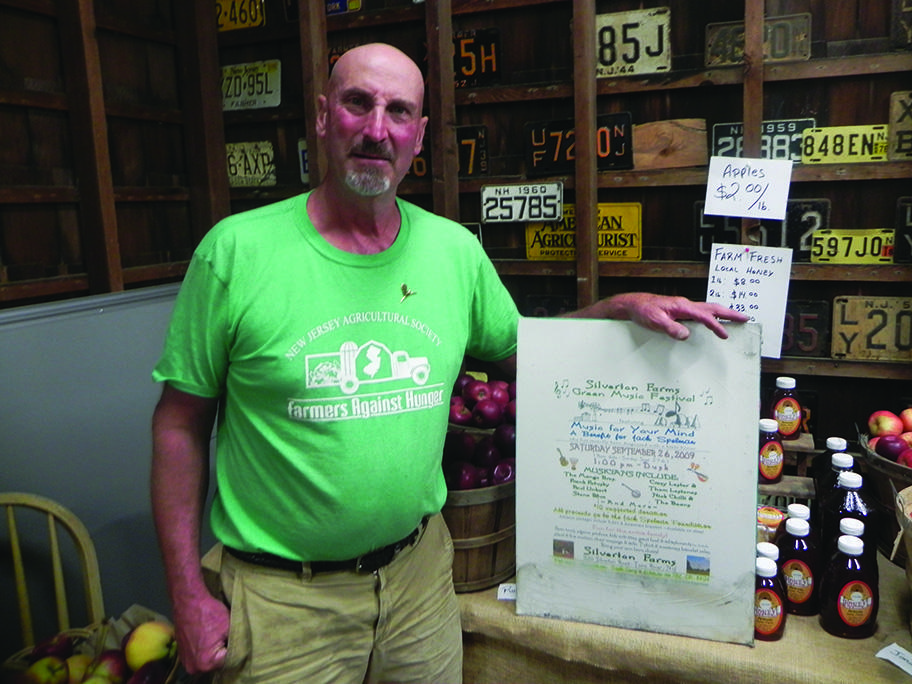 Tom Nivison stands with a poster from one of his early benefit music festivals. The Silverton Farms owner aims to have fundraisers in the spring and fall. (Photo by Richard Skelly)

TOMS RIVER — A lot of smaller farmers can learn from Tom Nivison about holding musical events at their farms. Nivison, owner of Silverton Farms, has been holding small music festivals at his 10-acre farm off Silverton Road since 1989.
Partly because he’s passionate about music — jazz, blues, rock, folk and bluegrass — and is himself a skilled banjo player, Nivison decided early on in his time as a farmer that he wanted to hold events to thank customers for their patronage.
“If someone from the community here comes up with a cause or a need, we supply the venue and the food vendors and drink vendors and hold it all right here,” Nivison said.
He plays banjo in a bluegrass band, White Oak, which has many paying gigs at coffee houses, festivals and bars, but also does many more unpaid gigs at nursing homes and other long-term care facilities.
“Hey, we love what we do, and we’re passionate about the music,” he said of White Oak’s charity work.
He is a first-generation farmer who purchased the former Hopkinson Turkey Farm from his grandmother’s good friend in the late 1980s. He said the “soils here were good from the get-go from all those turkeys.”
Back then, when he was exploring farming, “I talked to a farm real estate agent and he said, ‘You’re better off with 10 good acres of ground then you are with 50 bad acres, because you end up working your whole life to build up that 50 acres of soil when you can start making money right away with 10 good acres.’”
Nivison and his small crew raise vegetables on his eight working acres at Silverton Farms, following organic practices, including all kinds of tomatoes and peppers, many different lettuces, potatoes, sweet potatoes, string beans, bok choy, Swiss chard and many kinds of eggplant.
“When I was a kid, this road was all chicken farms,” Nivison recalled after his festival was over and most patrons had gone home.
On Saturday Oct. 9, Nivison, his wife Dawn, and a small crew of volunteers held a “Harvest Festival” at Silverton Farms.
While the weather was less than perfect, he still drew a good crowd to his farm that stayed there and patronized food and drink vendors until late into the afternoon. The event was a fundraiser for St. Jude’s Children’s Hospital in Memphis. Nivison tries to hold a fundraiser at Silverton Farms each spring and fall.
The Oct. 9 Harvest Festival was originally slated for the last Saturday in August, but had to be postponed due to high winds and heavy rain.
His band played earlier in the day, but the main afternoon showcase band was the ethnic-rock ensemble Gypsy Funk Squad with members from all over New Jersey.
They play an unusual assortment of instruments but also include conventional instruments like guitar, drums and bass and are led by sound engineer-guitarist Jack Lowry.
Nivison said he recruits volunteers to help with things such as parking, access, while helping the food vendors and just making sure the patrons are happy.
“Each time out, it’s a benefit show, it can be for an individual or family from this area, a local charity or national charity, in this case, St. Jude’s Childrens’ Hospital in Memphis. We also have to thank Ray Hlubik from Hlubik Family Farms in Chesterfield, he donated all the sweet corn for today’s event.”
“You’ve got to have a small group of staff or volunteers, you’ve got to have adequate parking or make arrangements for parking, and you want to line up some good food trucks or people who want to bring some food, either to sell it or give away,” Nivison said. “Also, you need to realize you can never start planning soon enough. You have to plan months in advance.
“It’s kind of like planning a wedding.”
Vendors at the fall harvest festival included Tammy Sue’s Kitchen, an empanada vendor, the local Boy Scout Troop No. 59, a funnel cake vendor, Fat Dogs, a specialty sauce vendor from nearby Manchester, along with his retail farm stand open for business all day.
Nivison has a good setup to accommodate musicians and a small crowd. His house sits on-site, and he has other structures with bathrooms that can shelter people in the event of rain, including even some hoop houses that are easily accessible.
“You need to make provisions for inclement weather, tents with some indoor seating, and have a rain date. In this case, the rain date saved us, because we had heavy rains in late August so we postponed the festival until today,” he said.