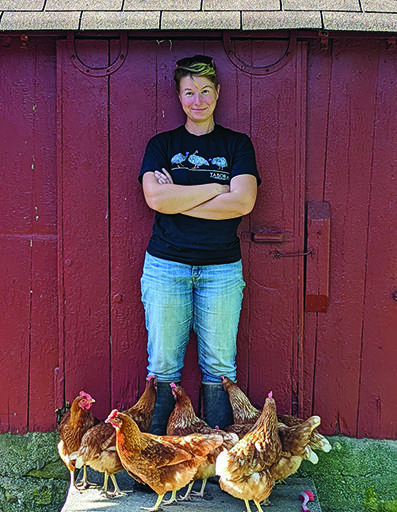 LAFAYETTE — Meg Myers said on more than a few occasions, visitors to her Cattail Hollow Farm have asked her to point out who the farmer is or just simply assumed her husband is the farmer.
“I used to be quiet when that happened,” she said. “But now, I just tell them that, ‘I’m the farmer.’ It’s important for people to understand that I’m the one who runs the tractor, cares for the animals. That a woman — a young woman — can be a farmer.”
Myers is a first-generation farmer. Earlier this year, she began farming operations at her own farm.
She graduated from Ramapo College of New Jersey in 2007. After graduation, Myers worked in office settings but wasn’t happy in what she was doing.
“There was no fulfillment. I was disillusioned in how the world worked. I needed to work with my hands. Something that would give me gratification. I looked for other opportunities,” she said. “Being a breast cancer survivor diagnosed at 32 helped me realize that I shouldn’t waste time doing something I didn’t love.”
Farming attracted her. The last people who farmed in her family were her great-grandparents.
She honed her farming skills working at three farms in the region over the last few years.
She first volunteered at City Green, an urban farm in Clifton, N.J.
The volunteer work encouraged her to consider making a major change in her life.
She applied to become an apprentice farmer; she was accepted into the program by City Green.
“I quit my office job on a Tuesday,” Myers said. “I began my apprenticeship on that Wednesday.”
She worked at City Green for about two years and then moved on to an apprenticeship program at Stone Barns Center for Food and Agriculture in Pocantico Hills in Westchester County, N.Y.
“I wanted to learn more about the animal-side of agriculture,” Myers said. “At Stone Barns Center, I was able to work with chickens, pigs and sheep as well as learn about rotational grazing and care for livestock.”
After the nine-month apprenticeship, Myers then moved back to New Jersey and worked in farm management at Hazelman Farms in West Milford for about four years.
“I worked with the owner of Hazelman Farms to expand the number of chickens raised at the farm,” she said. She also helped produce vegetables and fruits in gardens at the farm.
These farming jobs helped prepare her as she sought out land to establish her own farm.
She and her husband, Kim Skov — a software programmer — looked for property in the area and then purchased 11 acres in Sussex County.
While the land that became Cattail Hollow Farm had been previously used for agriculture, some of the ground had become overgrown with invasive plants and trees.
Cattail Hollow Farm has about 50 chickens, six ducks, and four Guinea fowls. Tomatoes, eggplants, hot peppers, green beans, peppers, kale, basil, sunflowers, squash and pumpkins are among the crops grown here.
The farm also has a greenhouse, two chicken coops, and two barns.
“The chickens are free range during the day,” Myers said. “At night, they’re locked up in the chicken coops.”
Thus far, she said she hasn’t had problems with wild animals in the region that might target any of her animals.
“The biggest threats here come from the hawks,” she said. “None of the animals have been taken by hawks.
Anti-hawk fencing has been installed next to the chicken coops to protect the animals just in case.”
Eggs, produce and other products from the farm are sold at a farm store in part of one of the barns.
She also sells honey from another local source.
“The farm is on Route 94,” Myers said. “The road is fairly busy and helps drive traffic to the farm store.”
Future possibilities Myers is considering to Cattail Hollow Farm include raising honey bees, sheep and goats.
“The goats would help clear brush,” she said, “while the sheep would help graze the ground. I’m also looking at adding other native and heirloom varieties of plants and crops.”