N.J. cole crop plantings are ‘well underway at this time’ 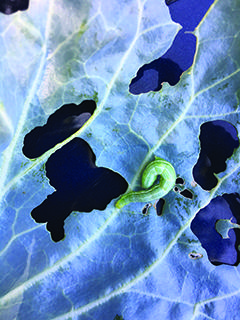 The cabbage looper is one of the insects that affects cole crops in New Jersey. (Photo courtesy Kristian Holmstrom.)

Cabbage, collards, kale, and other cole crops are on schedule for harvesting this Fall in New Jersey.
According to the 2020 Annual Report of Agricultural Statistics issued by the New Jersey Department of Agriculture, a total of 1,500 acres of cabbage were harvested in the state in 2019. Total production was 532,000 hundredweight, with an overall value of $9,480,000.
That same report indicated that there were 600 acres of collards harvested in the state; the 87,000 hundredweight resulted in a value of $2,640,000 of collards in 2019. The same amount of acreage was used to produce kale in New Jersey.
A total of 84,000 hundredweight of kale was harvested; the value was $2,461,000 in 2019.
“Fall plantings of cole (Brassica) crops are well underway at this time, and growers face a number of insect pests on these plantings, which include cabbage, broccoli, cauliflower, and collards/kale,” said Kristian Holmstrom, Rutgers Integrated Pest Management Program associate for vegetable production. “Plantings should be checked (scouted) at least weekly for the presence of insect pests. This allows for timely control. Ideally, field sampling should be conducted in the same manner each time, permitting the scout to determine whether pest pressure is increasing. A typical sampling scheme is observation by the scout, of 5 consecutive plants each in 10 random locations in the planting. Insect presence, and the type or species of pest is recorded each time.
“Initially, brassicas may be attacked by crucifer and lined flea beetles,” Holmstrom continued. “These pests are attracted to chemicals found in brassica tissue, and can cause significant injury, particularly on new transplants or emerging seedlings. Growers are advised to rotate their brassica plantings with as much distance as possible, to avoid encouraging large populations of these insects to develop on the farm. Some control success may be achieved in small scale operations by excluding flea beetles with row covers. Larger commercial growers often use a neonicotinoid insecticide at the time of seeding or transplanting. This is typical in situations where flea beetle infestations are the norm.
“These types of insecticide are taken up by the plant, and provide protection from feeding for two to three weeks, when the plants are most vulnerable. If flea beetle feeding is not anticipated, and scouting is undertaken, a threshold of 50 percent or more plants with flea beetles is used to trigger a foliar application of insecticide. In this case, there are many labeled products for flea beetles.”
“Other insect pests that feed on the brassica crops include a complex of caterpillars including the imported cabbageworm and diamondback moth larvae,” Holmstrom said. “Less frequently, cabbage, broccoli, etc. are infested with cabbage loopers, cross-striped cabbage worms, and beet armyworms.”
Holmstrom said the Rutgers Cooperative Extension Vegetable Integrated Pest Management Program recommends that growers should consider treating their fields if caterpillars are found on 10 percent or more plants that are in the 0-9 true leaf stage.
“From 9-leaf to the early head stage (in broccoli, cauliflower, and cabbage) infestations up to 20 percent may be tolerated,” Holmstrom said. “Once heads begin to form, a 5-percent threshold should be observed to protect the marketable portion of the plant. For leafy greens such as collards and kale, 10-percent plants infested is the threshold throughout. It is critical to be able to identify the caterpillar pests found in the plantings because some are quite resistant to common insecticides. For example, the imported cabbage worm, cabbage looper, and cross-striped cabbage worm may be eliminated with synthetic pyrethroid insecticides. There are a number of common, economical products in this category that are labeled for the brassica crops.”
He noted that several insects — including moth larva and the beet armyworm — are highly resistant to this class of insecticide.
“Adequate control of these difficult pests (as well as the other caterpillars) may be achieved with spinosyn products…and diamide class insecticides,” said. Holmstrom. “One positive aspect of spinosyns and diamides is that while very effective on all caterpillar pests of brassica crops, they are also much less toxic to beneficial insects, making them good choices when growers want to avoid harming these helpful members of the agro-ecosystem.”
Holmstrom indicated that a useful guide with more details on pest management of cole crops can be viewed at https://njaes.rutgers.edu/pubs/commercial-veg-rec/cole-crops.pdf.