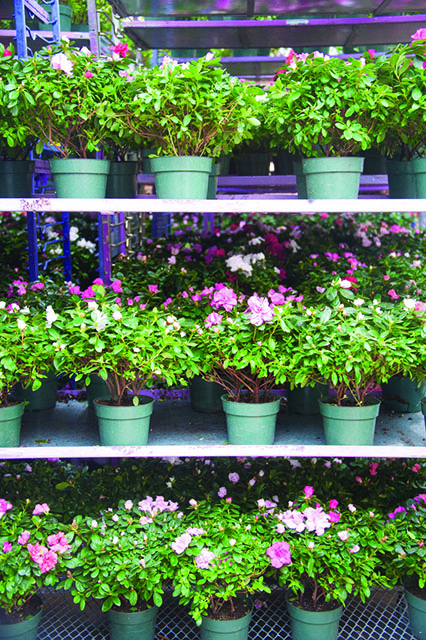 New Jersey is living up to its Garden State namesake, ranking above ag leaders Pennsylvania and Virginia in horticultural crops.
The USDA’s National Agricultural Statistics Service in December released the results of its 2019 Census of Horticultural Specialties showing that the Garden State, with 555 horticultural operations, raked in $505 million in floriculture, nursery and specialty crop sales value, providing it a seventh-place finish nationwide. Pennsylvania’s reported 1,365 operations and $310 million in sales earned a No. 10 ranking.
Reports throughout the Mid-Atlantic nevertheless largely reflect a national trend since the 2014 census report:
A loss of horticultural facilities that nationally equated to 11 percent. But where the 2,730 reported Mid-Atlantic operations reflected 221 fewer than in 2014, the sales value increased by $148.641 million to $1.33 billion.
New Jersey according to the census between 2014 and 2019 lost 75 horticultural facilities and at least $182 million in sales value, not counting operations within the state that withheld financials for the earlier census report.
The Garden State nevertheless lived up to its namesake regionally in nursery stock, potted herbaceous perennials and propagative horticultural materials, bareroot and unfinished plants, the census shows.
New Jersey in 2019 reported around the same number of potted herbaceous perennial plant operations as Virginia did — 28 to Virginia’s 26 — and nearly double the amount of sales: $25.128 million as compared with the $11.17 million in Virginia’s reported sales, not including withheld information.
New Jersey’s report shows 177 nursery stock operations in 2019 and $157.3 million in sales of trees, shrubs, grass sod and ornamental, foliage and marsh plants.
Virginia, with only 65 reported nursery stock operations, fared next best also in this category with reports of $79.012 million in sales.
New Jersey surpassed other Mid-Atlantic states also in the category of propagative horticultural materials, bareroot and unfinished plant operations. The state in this category shows 18 operations and $65.25 million in sales. Pennsylvania was second in reported Mid-Atlantic sales in this category, with 25 reported operations and $27.494 million in reported sales.
“The nursery and greenhouse industry is New Jersey’s largest sector of agriculture, and it provides outstanding quality stock and service to businesses, organizations and residents in our state as well as throughout the country,” NJDA Secretary Douglas H. Fisher said. “New Jersey being the seventh nationally ranked producer in the country points to a very robust and vibrant economy in this field and is a tribute to the fabulous and innovative producers in our state.”
Virginia meanwhile reported that double the number of its food crops were grown under protective cover as compared with 2014, that hydroponics production increased by 90 percent during that time and that sales decreased by $5.011 million.
Virginia reported fewer operations farming under protective cover — 78 as compared with 96 in 2014 — but under roughly the same 2 million-plus protected square feet. Of 129.08.2 hundredweight food crops under protection in 2014, 10.760 were reportedly hydroponic.
Those numbers soared in 2019 to around double the production, or 259.462 hundredweight, with a whopping 107.965 hundredweight attributed to hydroponics. Reported sales nevertheless declined from $21.555 million in 2014 to $16.544 million in 2019.
Tomatoes were a popular choice across the board for indoor growing, with 62 of Virginia’s covered growing operations reporting it a specialty.
Nationally reported sales of food crops grown under protection, at $703 million nationwide, was down 12 percent since 2014, according to the USDA.
Virginia fared best of the Mid-Atlantic states in the area of potted flowering plants for indoor or patio use, with 16 reported operations selling $46.893 million of the plants, according to the report.
Virginia is also a solid choice to venture for fresh Christmas trees, with 76 operations reporting $29.046 million in sales value and Pennsylvania behind it with 224 operations reporting $17.686 million in sales value.
Pennsylvania, meanwhile, gained mileage for reporting far greater land and buildings values than the other Mid-Atlantic states.
The Keystone State reported $793.555 million in land and buildings as compared with New Jersey’s $606.380 million (with some information withheld).
At the species level, New Jersey saw an increase in deciduous trees such as magnolias that are more often associated with southern regions but with species — the Stellar Ruby, Sweetbay and Teddy Bear Dwarf, for instance — that grow well in its USDA Zone 7.
The bark of the magnolia tree is believed to have anxiety-reducing properties.
The census reported this year on sales of bacopa, which has been used in traditional Indian (Ayurveda) medicine but is believed to have side effects. Virginia reported 26 bacopa operations with sales of $313,000, behind only Michigan and Oregon.
The USDA NASS Crops Branch works with the industry to devise a list of changes to the census, State Statistician Herman Ellison of the USDA NASS Virginia Field Office.
Also among the plants added to the 2019 annual bedding/garden plants category was euphorbia, which is believed to have antimalarial properties, to relieve breathing disorders including asthma, bronchitis and chest congestion, to dry mucus in the nose and throat and more (though not clinically tested and said to induce vomiting in too large quantities).
The Census of Horticultural Specialties report is the only source of detailed production and sales data for floriculture, nursery and specialty crops for the United States.
New Jersey and Pennsylvania, along with California, Florida, Oregon, Michigan, Texas, North Carolina, Ohio and Georgia, accounted for 66 percent of the nation’s $13.8 billion in sales.
The Mid-Atlantic States contributed to a combined $1.331 billion in sales.
Top commodity horticultural sale segments nationwide were down except for propagative horticultural materials, bareroot, and unfinished plant materials, which were up 4 percent to $720 million, and nursery stock that was up 7 percent to $4.55 billion, according to the USDA.
Casey Sclar, executive director of the American Public Gardens Association, attributed the results to the increasing worth, size and number of visitors at the nation’s $200 billion per year, 200 million employee public gardens, botanical sites and arboreta.
Sclar said, there’ll likely be “an amazing resurgence in different things.”