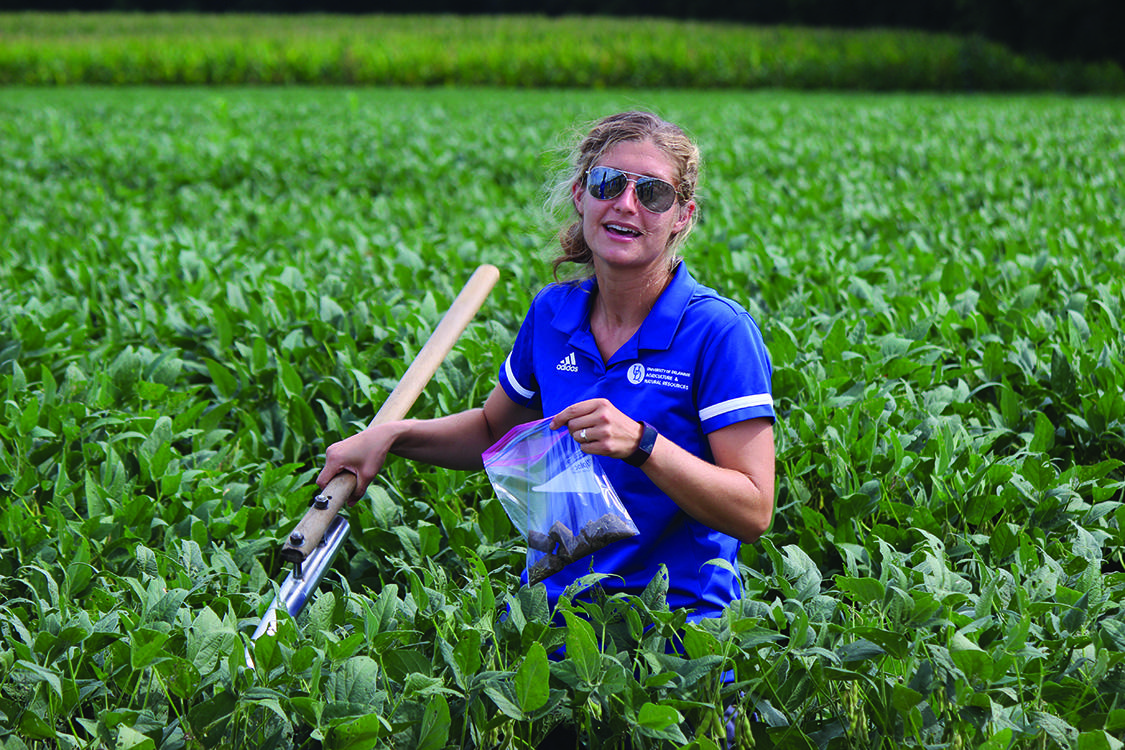 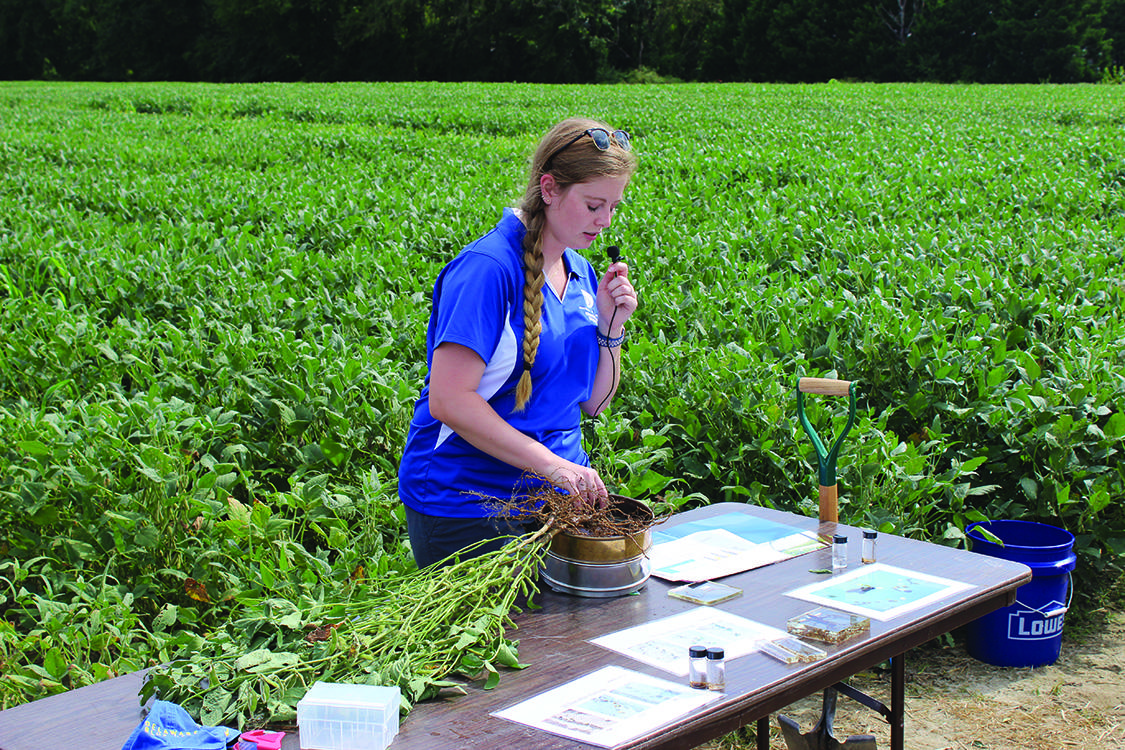 GEORGETOWN, Del. — While soil testing is commonly a winter and early spring activity, University of Delaware researchers are urging growers to pull soil samples now in soybean fields they suspect may have problems with nematodes.
During an Aug. 19 field day at UD’s Carvel Research and Education Center, Extension staff said soil testing is the only way to find out what type of nematodes are in a field and how high their population is.
Soybean Cyst Nematode is a top yield reducer on Delmarva and the pests presence can be difficult to identify as above ground symptoms often don’t appear or can be easily confused with other problems.
“It also gets dubbed the silent yield grabber,” said Alyssa Koehler, Extension plant pathologist, because it’s often at work without a grower knowing it’s there. Thus the need for sampling, Koehler said, to determine if the pest is in the field, at what level, and then begin to make a management plan going forward.
“You can’t start working on solutions until you know you need to be fixing something,” Koehler said.
Mid-August through mid-September is prime testing time, Extension staffers said. It’s late in the season but soybean plants are still growing and nematodes, if present, have had multiple life cycles.
Jake Jones, Extension agriculture agent for Kent County, said in sampling, growers or crop consultants can take either a predictive approach, pulling soil cores in a zig-zag pattern through a field area, or focus on a problem area with a diagnostic approach, sampling around the edge of the area as well as in healthy areas to get comparative nematode counts.
Koehler added soil cores should be taken at the base of soybean plants.
If they can’t get sent out right away, Jones said samples can be refrigerated but shouldn’t be frozen or allowed to dry out.
“Just treat them like you would a normal sample,” Jones said.
The nearest labs to send samples are the North Carolina Department of Agriculture’s Nematode Assay Service or the nematode assay clinic at Virginia Tech. Koehler said she can submit samples through September as part of grant projects but growers can also send samples for testing independently.
At the field day, Lexi Kessler, a graduate student studying nematodes, demonstrated the practice of root blasting, another option in determining if nematodes are present in a field.
“It’s a good way to know if you have soybean cyst nematode in your fields but not how many you have,” she said. “Once you have them, controlling them is a major issue.”
Kessler said root blasting is best done early in the season, about 30 days after planting. Root blasting involves digging up plants, soaking the root ball to remove dirt and then rinsing the root mass over a fine-grade sieve with high-pressure water.
In Delmarva, soybean cyst nematode was first confirmed in Delaware in 1979 and in Worchester County, Md., in 1980 before spreading throughout the peninsula and with no silver bullet treatment, the disease remains a major yield threat.
Funded by the Maryland Soybean Board, soil surveys for nematodes in Delaware and Maryland beginning in 2019 showed 40 to 50 percent of growers had soybean cyst nematode present in their fields and 41 percent of fields tested had populations over economic threshold levels.
They also are seeing a 65-70 percent reproduction rate in SCN females, Koehler said.
“If it’s over 10 percent, that’s not good,” Jones added.
Each female can lay 200 eggs or more and can survive 8-10 years in a field.
“That’s why it really becomes a long-term issue because once they’re there, they’re there for a while,” Koehler said.
The survey also showed increasing occurrence of root lesion nematodes in fields sampled but only a small percentage reached economic threshold levels.
Root knot nematode, which can be problematic in a wide range for crops, was also among the top genera of nematodes found in the survey but very few fields reached economic thresholds.
While eradication isn’t a feasible option, there are several management practices growers can use once they confirm a nematode problem exists.
Rotating in a crop that is a less suitable host than soybean is one option, with alfalfa near the top of the list. Corn, wheat and brassicas like forage radish that is getting more use in cover crop blends are also good options, Jones said. A poor host crop works to starve out the disease, bringing populations down.
Some weeds, including henbit, purple deadnettle and common mullein, are good hosts for soybean cyst nematode, so keeping fields clean is also helpful.
Koehler suggested rotating nematode-resistant and early maturing soybean cultivars in problem fields and planting those fields last to avoid spreading the disease through equipment.
In cases of severe infestation, seed treatments are an option, offering a moderate yield increase, Jones said, but only giving short-term protection. Fumigants and nematicides are also available.
“It’s combining all the tools that we have in our toolbox do deal with this problem we have,” Koehler said.