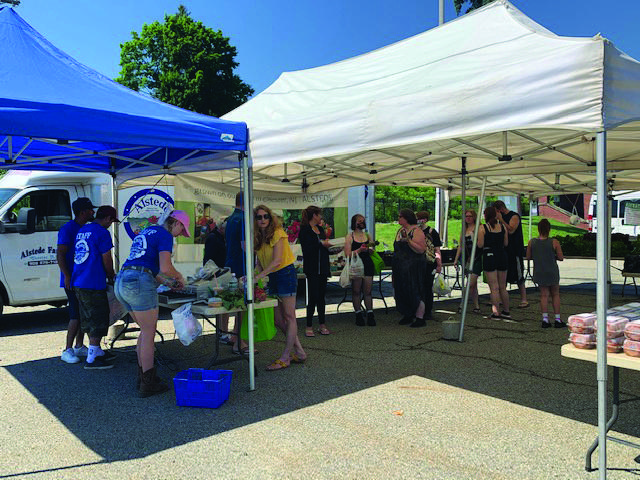 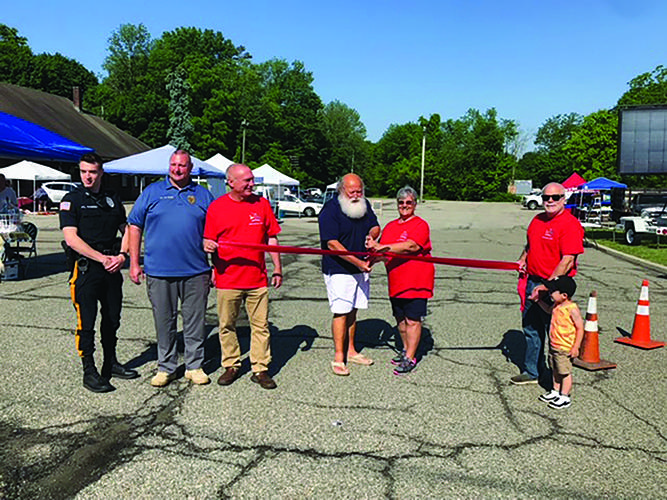 Mayor Joe Nanetko cuts the ribbon on the new Netcong Farmers’ Market. Holding the ribbon are, from left, Patrolman Matt Paonessa; Sgt. Russ VanHouten, interim Netcong police chief; Councilman Robert Hathaway; Market Manager Maria Patamia and Steve Fredericks, the president of the Netcong Community Partnership and Executive Director of the NCP, holding the hand of an unidentified child who was the first customer of the market. (Photo by Jane Primerano)

NETCONG — From the signs for miles on Route 46, Route 206 and Route 80, one would think Netcong is the center of the known universe.
The tiny Morris County Borough is actually just the confluence of those three roads.
But it does get plenty of traffic and the railroad station makes it a commuter hub.
Some years ago the borough started a farmers’ market in the train station parking lot, but it didn’t last
Over the winter, members of the Netcong Community Partnership approached Maria Patamia about starting another market.
The Community Partnership was created to manage the special improvement district and is funded by an assessment on commercial properties in the borough.
A former member of the partnership, Patamia ran a restaurant in the borough for seven years and said she was up for the challenge, although she was concerned the partnership should have started planning the market earlier than it did.
In spite of only a few month’s notice, she was able to attract Alstede’s from Chester and Sugarman Farms from Andover. High Mountain Foods from Kenvil was at opening day. Other food and craft vendors will be at the market on a rotating basis. Patamia said, including Rosie’s Empanadas of Woodland Park, Paolo’s Kitchen of New Providence and Lily Rose Bakery of Flanders.
The market is still looking for vendors, although Patamia said she doesn’t want so many duplicates that they take business away from each other.
She is encouraging groups like the Union Cemetery Association, of which she is a member, to attend the market and promote their interests.
More than 350 people attended the market on opening day, June 5.
Patamia credited the weather as a good omen for the market.
One hope for the market is to bring business into the borough and surrounding area. To that end, the Community Partnership provides a $5 gift certificate to anyone who spends $20 at the market.
The certificates can be redeemed at any shop in Netcong which has a small but bustling downtown including Carmine’s which regularly is named the best pizzeria in the county.
Another newcomer to borough commerce is the thrift shop at the Stanhope United Methodist Church (actually on the Netcong side of the Musconetcong River) which is also open Saturdays.
Councilman Robert Hathaway, chairman of the borough’s economic development committee, spearheaded the new market to bring more people downtown, he said.
Netcong’s business district was disrupted before the pandemic when a fire destroyed a large downtown building on the corner of Main and Maple streets.
Hathaway said the property owner has plans for a new building on the site with commercial uses on the first floor and office and/or residential uses on the upper floors plus parking.
Hathaway said he is optimistic about the future of Netcong and its farm market.