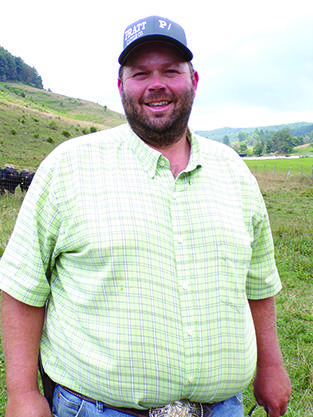 Jason Pratt is the incoming president of the Virginia Cattlemen’s Association. (Photo by Jane W. Graham)

ATKINS, Va. — Jason Pratt, the incoming president of the Virginia Cattlemen’s Association, learned a life lesson as a summer intern with the Natural Resources Conservation Service that bodes well for the industry he leads.
“Every farm out there is different,” he said during an interview at his family’s farm here in Smyth County, Va. “They have different resources. They have different problems.”
Pratt wants to see VCA both bring the state’s beef producers marketing options and tell the positive story of beef to consumers and legislators on both the state and federal level. He points to a lot of false information that is out there about this key industry and blames much of it on social media.
“As cattle producers, we must find common ground and work together to tell why our product is the most safe, wholesome and nutritious product on the shelf,” he said.
Pratt sees being VCA president as a big honor, saying the association had some influential leaders before he became president.
He traced ways the association has changed in the past 20 years with the industry.
Back then, he said, efforts were to improve marketing, to add value to beef. Producers have gone from taking un-weaned calves to auction barns to selling loads of weaned, vaccinated and often co-mingled loads using new technologies that lessen stress on man and beast.
“We didn’t have the political connections then,” he said. “In the last 10 years we have come to understand the importance cattle have on Virginia revenue.”
The association has worked, he indicated, to convey this to legislators and to work for ways government can protect this revenue stream. He pointed to successful efforts that have kept farmers from having to fence livestock out of all streams and springs.
Pratt pointed to agriculture enterprises that provide entertainment such as pumpkin patches that attract families several generations away from life on the farm, He sees these as ways those farmers have found to educate the public. He would like to find way cattle producers can do this.
He also wants to educate the public that is against using antibiotics to treat sick animals. He likened giving an antibiotic to a sick cow or calf to treating a sick pet or even a sick child. It is done to help the animal heal, he maintained, saying it was making animal care more humane.
Pratt believes VCA has the people and resources to successfully bring different segments of the industry to continue working together for the good of all members.
Pratt and his dad, C.W., operate Pratt Cattle Company on about 1,500 acres of rugged land in the mountains of Southwest Virginia. The farm sites are spread across Grayson County, home to the state’s highest peaks, Mt. Rogers and Whitetop, and neighboring Smyth County.
Their approach is an example of every farm being different. Rather than large tracts of level pasture, they graze small herds of 20 to 30 cows on small mountain boundaries. Pratt said it takes an hour and 20 minutes driving to check cattle on all of them.
“Large pastures in this area are very challenging to rent here,” he said. “There is a lot of competition here in grazing.”
The Pratts’ approach has resulted in a seed stock operation where they market 100 registered bulls and 50 registered females yearly. They hold two on-farm auctions each year, their Black Friday sale the day after Thanksgiving and their spring sale on the first Saturday in April.
Pratt said the purebred operation goes back to his dad’s 1964 FFA project. C.W. purchased his first registered Angus heifer on Christmas Eve that year. He was growing up on a Grade-C dairy farm and did not want a life milking, his son said. The Pratts now have a 250 head cow/calf operation.
They breed for both fall and spring calving seasons, using AI one time after cows and heifers have been synchronized. This lets them use the elite genetics available within the breed. On the next cycle, they are turned out with clean-up bulls.
Pratt talks about his Christian faith as easily and openly as he does his farming. It forms the base for the farming, his conversation reveals.
“We try to take whatever the Good Lord gives us and see what works, he said. “We didn’t plan it. The Good Lord put it in our laps. Probably if I had planned, my plan wouldn’t have worked.”
These gifts do include the land, soil and varying water resources.
They have worked with NRCS and the local Soil and Water District to develop and use their springs and streams wisely.
Pratt sees one major mistake in the approach to eliminating shade for cattle as these were developed. Farm advisors said cattle do not need shade.
The cows said “yes, we do.” They huddled under the remaining trees for relief from the heat of summer and killed the trees. He is now seeking ways to provide shade.
The Pratts do not use much intense rotational grazing due to their pasture sizes, he reported. They seek to manage the pastures, using placement of water and minerals to let the cattle find their own way over the land.
Even as this Virginia Tech grad is dealing with his own unique farming system, Pratt is pondering how to tell the consumer about the importance and benefits of beef as a protein source. He believes relying on facts proven by research and science is the way to go.