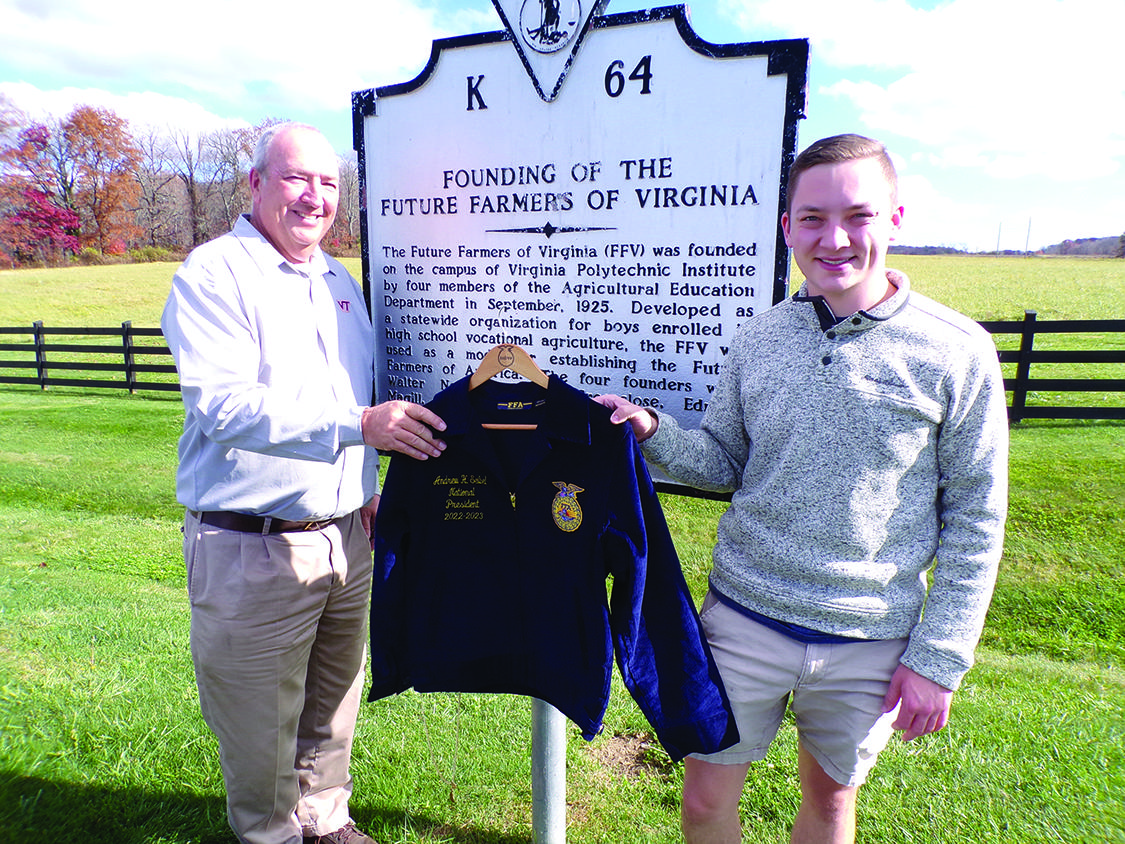 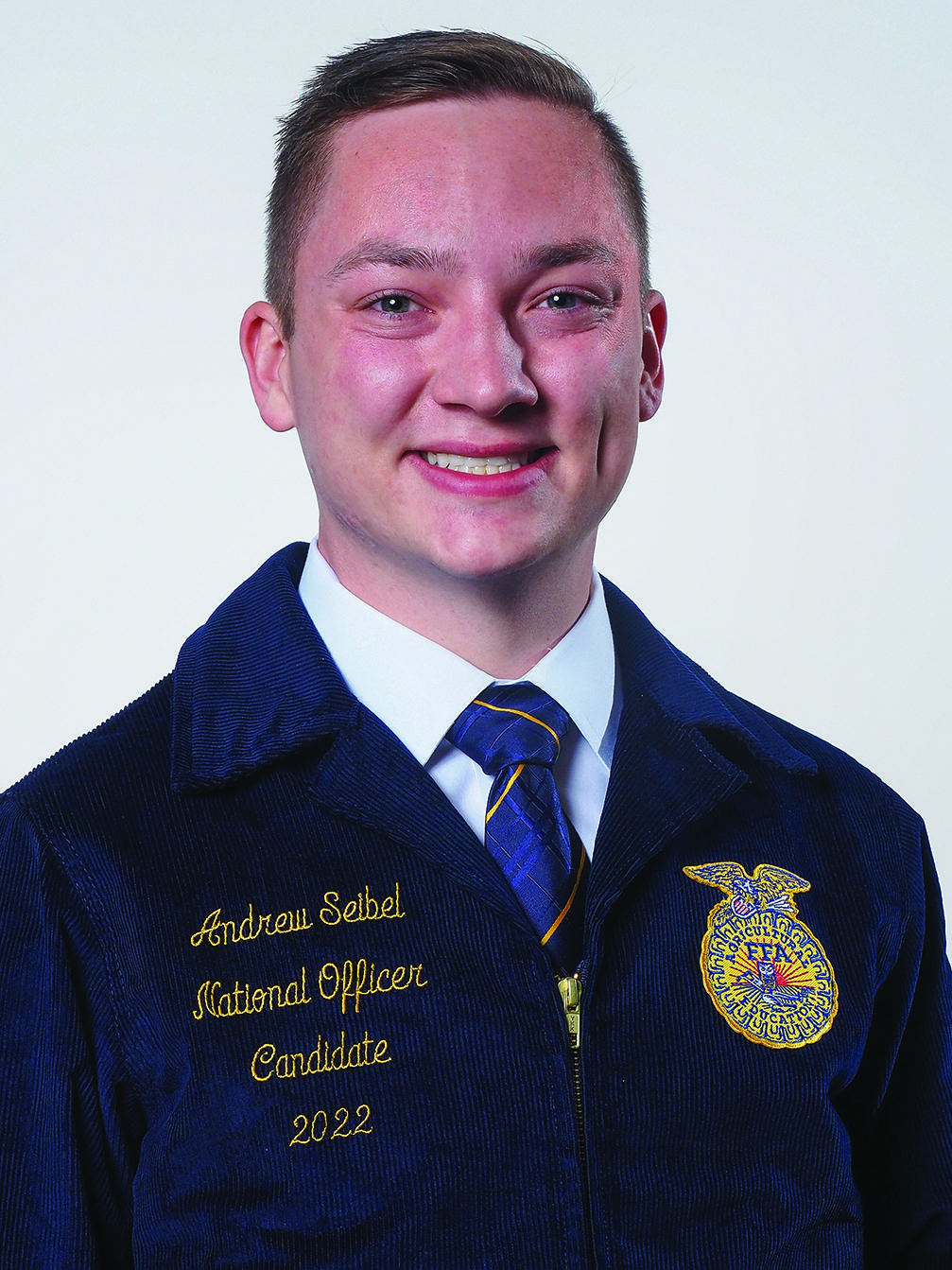 In the top photo, new national FFA president Andrew Seibel, right, and his dad, Andy Seibel, state executive director of the Virginia FFA, enjoy a moment of joy and reflection beside the historical marker the Commonwealth of Virginia has erected at the main entrance to Virginia Tech where the Future Farmers of America was born in 1925. They took satisfaction in displaying Andrew’s Blue Jacket, the symbol of membership for all FFA members.(Photo by Jane W. Graham)

BLACKSBURG, Va. — “I’ve experienced more change in two minutes than I have experienced in my whole life,” the new National FFA President Andrew Seibel said as he talked about the moment that he learned his life had just changed forever.
That was when he found out he had been chosen from a field of six to lead FFA in 2022-23.
The Virginia Tech sophomore brings a message for the young people he leads to the office as well as a passion for learning, leading and serving.
His experience in his own family and FFA led him to believe everyone can be the person they want to be; that no one has to try to fill another’s shoes. This has served him well as he has reached for his own success.
“I felt different,” he said. “My sisters were so involved, it was intimidating.”
Andrew is a third generation FFA member in a family emersed in FFA here on the Virginia Tech Campus where the Future Farmers of America was born with a 1925 meeting that created the Virginia organization. The future Farmers of America was established in 1928. Andres is the fifth national president from Virginia and the first in a decade.
Both his parents, Andy and Megan Seibel, are leaders in the state organizations: Andy is state executive secretary for Virginia FFA and Megan is director of Virginia VALOR.
His sisters, Tess and Claire, are acclaimed state and national FFA award winners.
His grandfather began the family tradition in FFA as a student at William Bird High School in Roanoke.
He and sister Tess, are the first brother and sister to hold national office. She was Eastern Regional vice president 2019-2020.
Andrew was still mentally processing his new reality in a joint interview with his dad on the VT campus. He said thousands of data points were collected about and from each of the candidates for the office.
“I’m extremely thankful,” he declared in his soft-spoken way. “So many people wanted to do it. I’m one of the few that gets to do it.”
Andrew is excited about one of the first official acts of his presidency, a trip to South Africa with his five fellow national officers. The trip is expected to help these young leaders learn gain an understanding of international trade, cultural intelligence, global agricultural issues how they experience economic crises and how other countries deal with these issues.
They will see first-hand the effects of the long droughts being experienced on the African continent and responses. Andy pointed out this may be very helpful as drought becomes more troubling in the USA.
Andrew explained that there are six national FFA officers: president, and secretary and four regional vice presidents.
They will travel over 120,000 miles to attend FFA meetings across the nation. The only one he is sure at this point that he will attend is Virginia’s convention in June at Virginia Tech.
This travel means he will have to defer his studies for a year in order to fulfill his new responsibilities.
This newly chosen president is looking forward to helping develop FFA’s strategic plan for the future. To do this, he wants to find gaps in the program and fill them to better serve members.
Andrew’s goals ae to have FFA be more career oriented, to help involve students, to engage the underserved and empower educators.
“They are so special,” he said of those educators.
The Seibel’s reported that 69,500 people registered for the 95th National FFA convention in Indianapolis Oct.26-29.
Andy reported the organization has a record membership of over 800,000. Andrew said projections membership will reached the one million mark in 2025.
“I love college” Andrew said as he completed his future after the coming year.
He is not sure now where he will be. His dream, if he stays at VT, is to be a student manager for its basketball team.
He said he has worked for the VT Hokie Club and loves the leadership and direction of the coaches in developing people, not just managing.
Opportunities are opening to him at other colleges and he is considering what is best for him. As a college sophomore, he does not have a definite career goal but is interested in learning about the global food chain and how it works.
While traveling he will be keeping in mind that there is a lot of international discussion about ways to make sure there is a safe and sustainable food chain.
“Food is a very big issue,” he stressed. This is a very imperative time in education al and educational programs. We are going to be the student voice in the national discussion.”
For now, his efforts toward some of his goals are focused on his family’s farm in Botetourt County Va. where they raise beef cattle and wine grapes.
The father-son duo said the family is considering creating a venue where weddings and other events can be part of the farm.
It could possibly help them market their wine grapes more effectively to consumers as wine.
Wherever Andrew Seibel finishes his education, it seems he will be an advocate for agriculture who just keeps serving for he says “that’s what it is all about.”