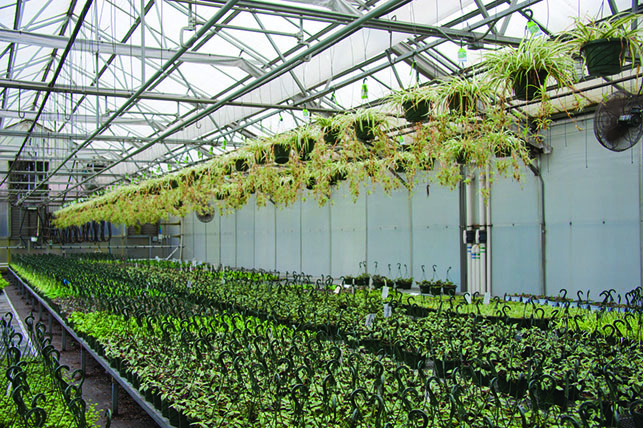 The USDA’s Census of Horticultural Specialties showed the Mid-Atlantic largely reflect a national trend since the 2014 census report: A loss of horticultural facilities that nationally equated to 11 percent. But where the 2,730 reported Mid-Atlantic operations reflected 221 fewer than in 2014, the sales value increased by $148.641 million to $1.33 billion. (Photo courtesy Edwin Remsberg, University of Maryland)

NEWARK, Del. — The Produce Marketing Association welcomed the publication of the new 2020-25 Dietary Guidelines for Americans.
Jointly published by the USDA and Health and Human Services every five years, the guidelines provide science-based recommendations encouraging healthy dietary patterns for Americans of all ages.
This edition expanded the guidance and for the first time included recommended healthy dietary patterns for infants and toddlers.
Last year, PMA convened a task force of industry stakeholders to examine and provide written comments on the Scientific Report of the 2020 Dietary Guidelines Advisory Committee, an independent, science-based group that provided advice to the U.S. Federal Government for finalizing the guidelines.
PMA’s comments, submitted on Aug. 10, encouraged federal agencies to continue to work on emphasizing the importance of increasing fruit and vegetable consumption by recognizing the health benefits they provide.
The PMA comments called on USDA and the Department of Health and Human Services to go beyond education campaigns and invest in effective interventions that will increase consumption of fruits and vegetables.
It also offered suggestions on increasing positive outcomes from the federal efforts.
Encouraging produce consumption
“PMA is pleased to see the 2020-2025 Dietary Guidelines emphasize the need to increase consumption of fruits and vegetables across all age groups and socioeconomic groups,” said Dr. Max Teplitski, chief science officer for the PMA. “However, we are all aware that consumption of fruits and vegetables continues to decline overall in the U.S. and we believe bold action within the Dietary Guidelines roll-out to modify consumer behavior is needed and will require coordinated policy changes. Fruits and vegetables are not just a source of fiber, vitamins and a few key nutrients. They are also a key ingredient in diets that will fend off a multitude of chronic illnesses.
“Most importantly, while we should acknowledge and promote the clinical benefits of produce, we need to continue tapping into the enjoyment and sensory gratification of eating produce: sometimes crunchy and fragrant, sometimes sweet or sour or savory.”
The announcement provides the public with up-to-date evidence on dietary behaviors promoting health and may help prevent chronic disease.
The key recommendations look similar to those of the past and address two topics that garnered much attention throughout the development of the guidelines: added sugars and alcoholic beverages.
DGA carried forward the Dietary Guidelines Advisory Committee’s emphasis on limiting these dietary components.
The four overarching guidelines encourage Americans to “Make Every Bite Count” by:
• Following a healthy dietary pattern at every life stage.
• Customizing and enjoying nutrient-dense food and beverage choices to reflect personal preferences, cultural traditions and budgetary considerations.
• Focusing on meeting food group needs with nutrient-dense foods and beverages from five food groups — vegetables, fruits, grains, dairy and fortified soy alternatives, and proteins — and staying within calorie limits.
• Limiting foods and beverages higher in added sugars, saturated fat, and sodium and limiting alcoholic beverages.
The USDA’s MyPlate translates and packages these principles of dietary guidance for Americans in an accessible way.