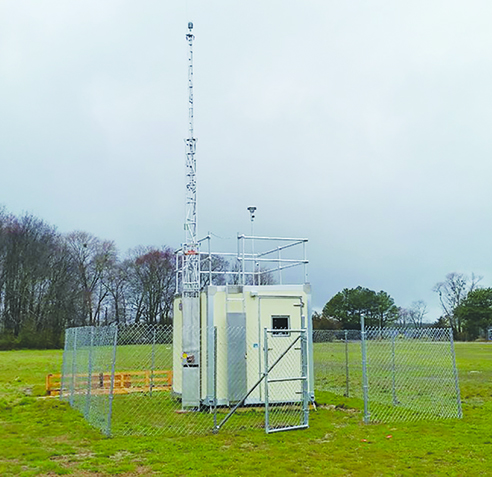 BALTIMORE — A new ambient air monitoring network on Maryland’s Eastern Shore is up and running and early data shows levels of ammonia and particulate matter far below state and federal standards.
Beginning in April, two new collection stations began measuring continuous ammonia, fine particulate matter and coarse particulate matter on the Lower Eastern Shore.
One station, near Pocomoke City, is in an area with a relatively high density of poultry houses, and another, in Princess Anne, is in an area where fewer poultry houses are nearby. For comparison, near real-time concentrations of ammonia and fine particulate matter are being measured at existing stations in downtown Baltimore and the Horn Point Laboratory, near Cambridge, Md.
All data in the monitoring network, including hourly data and monthly summaries, is being collected and fully publicly available from the Maryland Department of the Environment at mde.maryland.gov/programs/Air/AirQualityMonitoring/Pages/Lower-Eastern-Shore-Monitoring-Project.aspx.
On the MDE website, a map illustrates near real-time concentration of ammonia, fine particulate matter — particles 2.5 microns or less, more than 100 times thinner than a human hair — and coarse particulate matter, particles 10 microns or less in size.
The ambient air ammonia screening concentrations presented on the monitoring website are able to be compared to results of the real time concentrations of a​mmonia detailed on the map.
The concentrations reported on the map are displayed for the most current hour and the 11 previous hours.
Data collected from April to June shows average hourly ammonia levels for all the monitoring sites at less then 10 parts per billion, far below MDE’s one-hour screening level of 350 parts per billion.
The maximum hourly values for ammonia ranged from 9.4 parts per billion at the Horn Point site to 75.6 at the Pocomoke City.
The Baltimore and Princess Anne sites had similar maximum values with 24.2 and 23.2 parts per billion, respectively.
Regarding particulate matter, the Princess Anne site had slightly higher fine particulate matter values than the Pocomoke City site and both sites were near equal in coarse particulate matter values.
Measured in micrograms per cubic meter, the Horn Point site had the lowest values for fine particulate matter with an average 24-hour value of 4 and a maximum 24-hour value of 10.
The Princess Anne site had the highest average and maximum 24-hour values at 7 and 17.6, respectively.
The National Ambient Air Quality Standards 24-hour standard for fine particulate matter is 35 micrograms per cubic meter.
The Baltimore and Horn Point sites do not have measuring capability for coarse particulate matter.
For the initial three months of monitoring, the two Lower Shore sites had the same average 24 hour value for coarse particulate matter, 13 micrograms per cubic meter and Princess Anne’s maximum 24-hour value was 30 compared to 29 for the Pocomoke City site.
The National Ambient Air Quality Standards 24-hour standard for coarse particulate matter is 150 micrograms per cubic meter.
The monitoring network, jointly supported by Delmarva Poultry Industry, Inc., The Keith Campbell Foundation for the Environment, and the Maryland Department of the Environment, is the first to measure ambient ammonia levels on the Eastern Shore.
DPI, the Campbell Foundation and MDE agreed in 2019 to collaborate to build the new network, with the nongovernmental partners committing more than $500,000 to the effort to keep taxpayer costs to a minimum. MDE had sole authority to determine the sites of the two new monitoring stations and is operating the stations.
“The launch of this data-gathering effort reflects the chicken community’s firm commitment to transparency and to being a good neighbor,” said Holly Porter, DPI’s executive director. “We share with all Marylanders an interest in better understanding how farms, suburbs, and denser cities can coexist on the Eastern Shore, and this ambient air monitoring network furthers that understanding. We look forward to all stakeholders having the opportunity to review the data this network will supply.”
“The Campbell Foundation is participating in this partnership to develop a better understanding of the actual environmental conditions in the region and to advance productive conversations on environmental stressors in the Bay watershed,” said Samantha Campbell, president of the Campbell Foundation. “In this first year of data collection, we want to expand our reach to community members who have expressed concern over air quality effects on human health. We want to understand the local perspective on where our help could be most valuable.”
No NAAQS have been established for ammonia; however, risk-based residential and worker air concentration screening levels have been issued by various federal and state agencies.
Among the available exposure levels that exist, the three that are shown reflect those that MDE said best fit the objective of this project — to provide data on residential air quality in the vicinity of poultry operations.
The first is EPA’s residential lifetime exposure concentration, which assumes an exposure concentration reflective of a residential setting, where an individual would be exposed 24 hours a day, 350 days a year, for 30-years.
In terms of odors, MDE said there is no universally accepted concentration at which ammonia can be detected.
An odor threshold for ammonia has, however, been documented in different studies to be as low as 40 parts per billion, and sensitivity to odors can vary among individuals.
This threshold is below the levels being used to determine impacts to public health, which means that an odor can be detected before the concentration reaches a level where public health is being impacted.