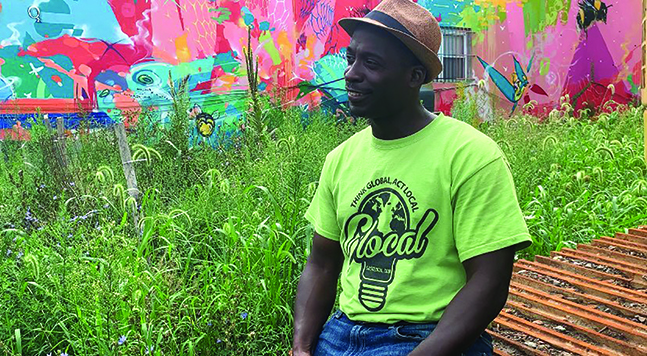 NEWARK — A 3-year-old boy weighed down by his oversize backpack and clutching the hand of his father, scurries down the ramp in front of his preschool.
To his right he sees a sidewalk covered in broken glass, abandoned fast-food wrappers, and a pile of tattered mattresses in front of a long-ago abandoned home.
But to his left, he’s able to takes in the giant bumblebees that fly among a swirl of reds, blues, and yellows on the once peeling concrete walls that surround the Garden of Hope, an urban garden tucked within Newark’s West Ward.
The garden, one of a plethora that have popped up since the city started their Adopt-a-Lot program in 2004, was started by Newark Science and Sustainability Founder and Managing Director, Tobias Fox. Fox’s colleague, Jacqueleen Bido, came across the trash-strewn vacant lot in 2015 and thought it would be the perfect place to begin the community project.
“One day as I’m standing in the lot, observing the space, I noticed a group of children exiting the adjacent building … Social psychology teaches us that environment has a direct influence on our behavior, and I imagined what effect the conditions of the neighborhood — despair, hopelessness, abandonment, and criminal activity — were having on the children. It was at that moment I decided that I wanted to take on the challenge of transforming the space,” Fox said.
After leasing the lot from the city, the garden morphed, not only into a place of beauty, but a community meeting place where residents came to feed their body, minds and souls.
“The Garden of Hope is a place where strangers become friends who work together to build a sustainable tomorrow. When I think of the impact we have on the Newark community I believe it is seen through our ability to engage people of all ages in playing an active role in living sustainably,” Bido said.
This spring, after serving the community for the last five years, the garden began its transformation into a year-round sustainable urban farm, complete with a hydroponic greenhouse, commercial kitchen, and farm stand.
The project is slated for completion in December 2020 but may never have gotten off the ground if not for the work of New Jersey Natural Resource Conservation Service soil scientist, Edwin Muniz, who provided a soil screening assessment for Fox in 2015.
Muniz first visited the site after Jamie Bruno, founder and program director of Urban Agricultural Cooperative, reached out to NRCS for assistance.
“I learned about the NRCS soil testing at a conference I went to in 2015, and immediately saw value for the urban agricultural community. They offer a free service with highly detailed testing, that I saw as an incredible empowerment tool. As a community gardener or urban farmer who tries to select and make choices on their lot, that information will enable them to make the right choices for themselves and their community,” Bruno said.
NRCS offers free soil assessments to urban communities through their “Technical Assistance for Community Gardens,” program.
The evaluation provides a trace metal content examination, general site and soil characterization, and information on soil health indices.
This past year when Fox decided to transition from a leaseholder to landholder and purchase the lot to make his dream of an urban farm possible, the owner of several buildings in the area, including those adjacent to the garden, came to the public hearing to approve the farm, in opposition.
“When I saw him, I really thought he was there in favor of our project. But he came to try and persuade the city to not allow us to develop this site… One of his defenses was that the soil was heavily contaminated. However, he didn’t have proof, so I had to show documentation that the soil wasn’t contaminated, and that was based on the soil screening done by NRCS,” Fox said.
Since NRCS started providing these services in 2011, about 145 community gardens have been served. The major focus of the tests, especially in urban settings is the amount of lead and arsenic present.
Depending on the amount, NRCS can recommend strategies to limit exposure, including maintaining an optimum pH level to improve available nutrients which will reduce the pathway for trace metal uptake, covering exposed soil with mulch to increase organic matter, and planting in raised garden beds.
“Our purpose is to help the community grow food in a safe environment. It’s difficult for city residents to find fresh products nearby, and it’s really rewarding to be able to provide assistance to them,” Muniz said.
As for Fox, he’s cautiously optimistic about the future for the neighborhood – one that has seen a lot of violence, including four murders in the last five years.
“My hope is that this redevelopment project … will help prevent the next murder from happening. All the neglect that takes place here is a magnet for crime, and we’re hoping we can start changing that outlook.”