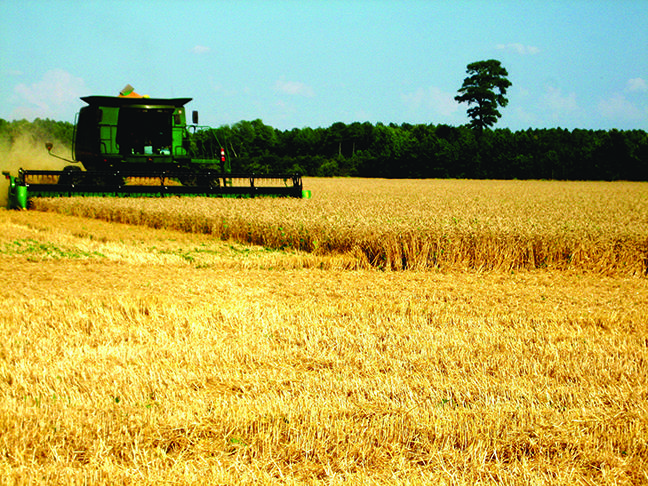 The average double-cropped acreages vary by region, according to the USDA, with the Northeast region showing the highest percentage of double-cropping in the United States.
In the Multi-Cropping Practices: Recent Trends in Double Cropping, issued by the USDA in 2014, the Northeast region, running from the Richmond, Va., area north to Maine, had the highest percentage of double-cropped acres, followed by the Southeast region at 7.47 percent.
“Our growing season is very favorable for double crop systems,” said Andrew Kness, University of Maryland Extension agriculture and natural resources agent in Harford County. “Double cropping in general is a way to maximize production, since you are harvesting two crops in one year from the same field, versus one crop.
“The Southeast’s larger acreage share may reflect its longer growing season,” the report said. “However, the extent to which shorter growing seasons pose a constraint depends on which crop combinations are considered. Farmers in higher latitudes, which have shorter growing seasons, regularly grow winter crops. Although some common double-cropping combinations might not do well in those regions, the large acreage share in the Northeastern States suggests that growing season constraints can be overcome with alternative combinations or production practices. As research on double-cropping management practices and combinations continues and hybrid seed varieties (such as early maturing varieties that can reduce the negative yield impacts) become more available, more opportunities to double crop could appear throughout the country.”
A number of farmers in Delaware, Maryland, and Virginia utilize barley in many of their fields as the double crop of choice.
“Barley can be chopped green for feed for livestock, harvested for grain, and/or harvested for straw. It also is a small grain that offers good cover crop qualities over the winter, holding soil and nutrients.” Kness said. “For it to be considered a double crop, both crops must be harvested. If not harvested, then the barley is simply a cover crop.
The choice of barley versus wheat – another grain used in double-cropping – is sometimes based on timing.
“Barley…matures a bit earlier than wheat, so the subsequent crop can be planted a little earlier than it would following wheat, which offers yield advantages,” said Kness. He noted that it is important for farmers to “consider what crop is following the barley to ensure it has enough time to mature before the fall frost. Also consider fertility – farmers need to make sure they have enough fertilizer applied to supply the needs of both crops.”
He said barley is typically paired with soybeans, but “sometimes corn if the barley can be harvested early enough. Other warm season forages can follow barley, such as sorghum or sudangrass. In some areas, sweet corn is planted after barley. You have to plant a crop after barley that can mature in time before the frost. Some field corn hybrids may be too long for this scenario.”
Wimberly Farms in Somerset County, Md, is one of the farms that double crops barley and soybeans in its fields. The family farm includes acreage in Princess Anne.
“We double crop with barley because it’s typically ready for harvest two weeks earlier than wheat,” said Kevin Anderson of Wimberly Farms. “That gives us a wider window to use our equipment efficiently.”
While field corn has been an option as a second crop, if the barley is harvested by Memorial Day, Anderson said they “…have found that we make better money from soybeans than from corn.”
Throughout the Delmarva, the harvested barley is used for a variety of purposes.
“Some of the barley is malted and used in the local craft brewing industry,” said Michael Wallace, Director of Communications for the Virginia Department of Agriculture and Consumer Services. “Other barley growers will cut their fields when they are green and bale the whole plant for cattle feed. The majority of Virginia-grown barley goes into animal feed.”