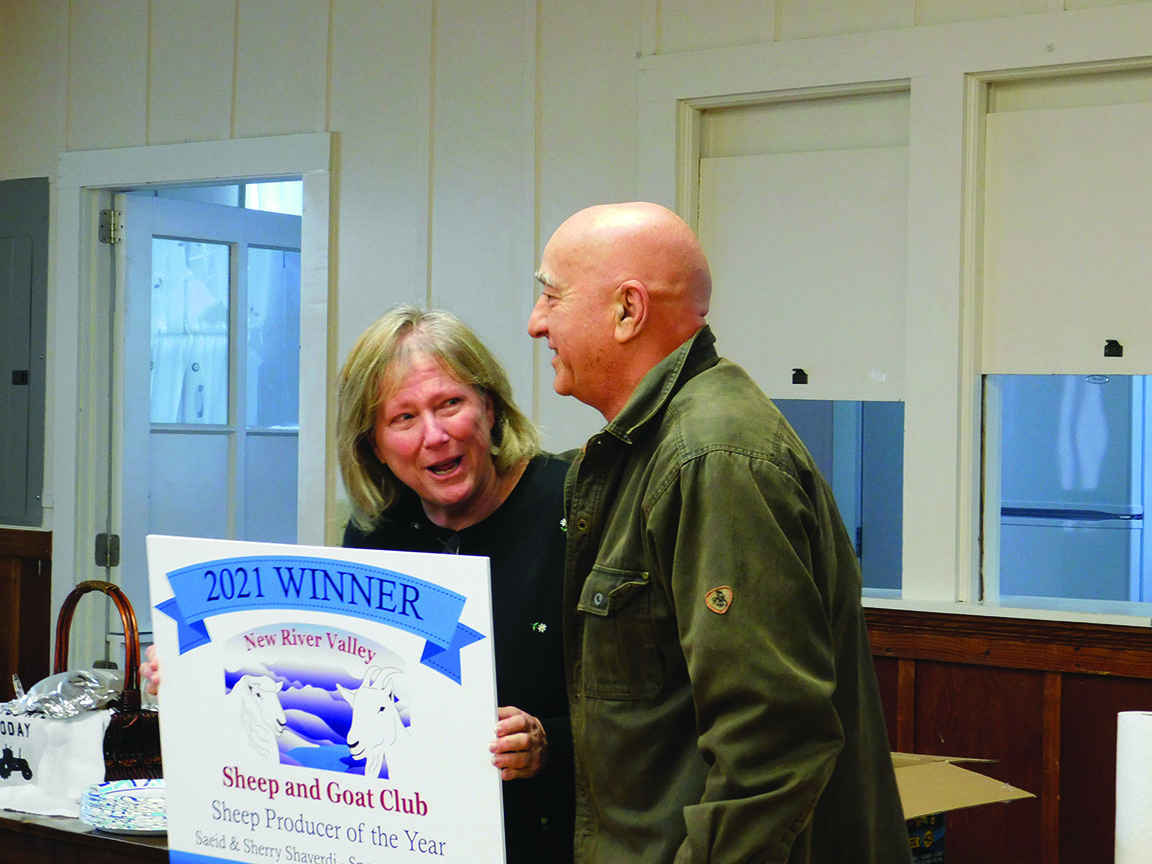 DRAPER, Va. — The New River Valley Sheep and Goat Club opened its annual meeting here by handing out a variety of awards to members and supporters of the organization that claims members from three states.
The 2021 Sheep Producer of the Year went to Saied and Sherry Shaverdi of Snowy Creek Farm in the Speedwell community of Wythe County. The couple was totally surprised when the award was announced. They were recognized for being an excellent example of the breeding of sheep, of herd improvement and of marketing.
Jamie and Sarah Miles of Seven Stands Farm in Hays, N.C., captured the 2021 Goat Producer of the Year award. Their consistency in producing healthy Myoptic goats for sale at New Holland, Pa., producing fine breeding stock as well as direct marketing their animals earned them the award, the group said.
The organization known for member enthusiasm awarded newcomers to the industry, Terry and Gail Teer its 2021 Most Enthusiastic New Member Award. The Salem, Va. couple had raised and trained Border Collies for 10 years before purchasing their first sheep last year. Terry captured the attention of the folks attending the clubs recent fall festival with his dogs’ herding demonstration.
Pam Martin, a young person who did not own any sheep, was chosen as the Most Industrious New Member of the club. She is from Draper, Va., where the club’s festival was held.
Jennifer McClellan, club president, told those attending the annual meeting that Martin helped with set-up for the festival and engineered the popular straw maze that was part of the fun for children attending the family-oriented event.
The club honored two people who helped them with events. Its first Sparkplug Award went to Michele Cook of Honeysuckle Hollow Farm in Covington.
She helped fine-tune the group’s existing logo so it could brand the first festival and helped develop sponsorship levels for funding the event. She also made the long drive from Covington the NRV for meetings.
The group’s second Sparkplug Award went to Paula Bittinger who opened her Legacy Longwools Farm in Bent Mountain, Va., to host an educational event when another scheduled event had to be cancelled. Attendees learned about her Leicester Longwool sheep, a heritage breed.
Lisa and Randy Shell received the 2021 Member Business of the Year Award for their Kai Mohair Farm in Rural Retreat, Va.
They have raised Angora Goats for over 30 years. Lisa shears her own sheep, dies the fiber knits and crochets them to produce their products. She shared her knowledge at the club’s first Drop Spindle Class earlier this year.
Draper Mercantile and The Draper Village owner Debbie Gardener the choice of Allied Business of the Year. She made the facilities at the farm associated with these businesses available free for the festival that attracted an estimated 2,500 people.
The club named Melody Simpson from Pearisburg, Va., Junior Entrepreneur for 2021. This high school student milks her own goats and makes goat milk soap. She sells it through her thriving business, McClellan noted.