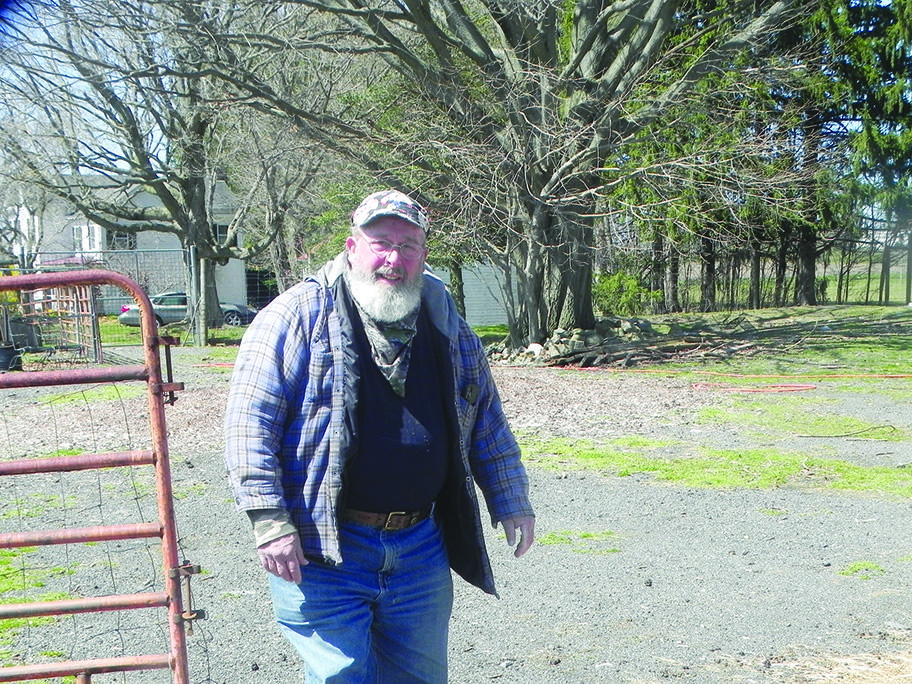 Tom O’ Donnell of South Brunswick raises beef cattle, goats and sheep on 20 acres of leased land in an incongruous location, tucked amid corporate parks and warehouses on borders of Cranbury and Monroe townships. (Photo by Richard Skelly)

CRANBURY TOWNSHIP — To be sure, with all the car and truck traffic on Cranbury-South River Road [Route 535], many drivers must be doing double takes.
Behind deer fencing on about 20 acres of land and a long driveway sits an old farmhouse.
One large fenced-in pasture contains free range goats munching on grass and on the other side of the farmhouse there is a larger pasture with beef cattle and sheep.
The incongruity of the scene near the entrance to Turnpike Exit 8-A in Monroe is striking, as the farmland is neatly tucked in between warehouses and office parks here.
This stretch of roadway used to be potato and vegetable farms, apple and peach orchards with some of the most fertile soils in the United States, but since the 1990s, towns like Cranbury and Monroe have been affected as the Turnpike Authority finished up improvements on the roadway around Exit 8-A, just north of Hightstown.
Like many farmers around the Garden State, Tom O’Donnell who leases the farmland came to farming as a second career. He was raised in suburban East Brunswick, but said he had the benefit of spending summers at his grandfather’s farm in Jackson, Miss.
He gained knowledge and a passion for livestock early in life.
He went to Union County College and studied electronics and then transferred to Rutgers.
He was working toward his degree and working in the Physics lab on the Busch campus of Rutgers when Siemen’s Corp. called and he was offered a good paying job a short time later.
He never got his bachelor of science degree from Rutgers.
“Siemens offered me $50,000 a year and a car in the 1970s,” he said, “my father at that time was making about $25,000 a year. I worked for them for seven years, all with biomedical electronics.”
These days, O’Donnell, who has owned land-clearing and recycling businesses, works as a heavy equipment and crane operator for Local 825. He’s involved helping to dismantle the Oyster Creek nuclear power plant in Forked River.
He owns 50 acres for goats, sheep and beef cattle near Columbus Farmers’ Market, lives on 8 acres in the Dayton section of South Brunswick and leases the land he’s currently using off Cranbury-South River Road.
“My grandfather had a 28-acre farm at the end of a dead-end road. They all went to his driveway to turn around,” he recalled riding in his truck to deliver a bale of alfalfa to the cows and sheep.
“On two sides of my grandfather’s farm was a 1,500-acre beef cattle farm, so that’s kind of where I grew up, playing commandos out in the fields with the cows,” he said. “My grandfather was basically hot peppers and vegetables but he had a few cows, too.”
He came into the incongruous location on Cranbury-South River Road six years ago and he found the parcel through a friend and co-worker when O’ Donnell operated the land clearing business.
O’Donnell signed a long-term lease with the owner but he’ll only be on the property for another year or so, he said.
After that point, he will focus his cow, goat and sheep-raising efforts on the 50 acres he owns near Columbus Farmers’ Market.
Why cattle, goats and sheep?
“Chicken and pigs take a lot more time,” he argued, “these guys are used to free ranging, they’re self-sufficient. Pigs, you have to be with them, they’re very smart, and they can and will escape.”
He’s found a market with the area’s growing Muslim population, and added, “a lot of people that have emigrated here from different places, they like to take care of the slaughter themselves. I’ve worked a deal out where I’ll put some wood chips down they can do their whole slaughter on plastic and then they’ll take everything with them, all parts, and it’s all folded up and goes right out the driveway, nothing stays here. I work with them, but they understand if they want to slaughter it here, they must take every scrap with them.”
For his still-small retail sales operation, O’Donnell sells much of his packaged meat to co-workers in his crane operators union, Local 825. He gets all of his processing done at Smucker’s near Lancaster, Pa., but looks forward to the possible opening of a new meat processing facility near Hackettstown.
“They do a great job, they make all the cuts I want, it’s a very clean, sanitary operation and they wrap it and vacuum seal it in very heavy plastic,” he said.
Because he’s working with such large crews at various construction sites, his beef sticks, beef bologna, hot dogs and hamburgers are a hit.
On his smaller parcel of leased land in Monroe, he raises more than 20 cows, 18 sheep and a flock of grass-fed goats in the second pasture. He has 19 Belted Galloway cows.
He described his wife, Lynne, as “a saint,” and credits his daughter, Leo, for her support and Internet help.
“At my grandfather’s farm I learned a lot about vegetable farming, but because he had some beef cattle too, I learned about livestock,” he recalled. “I like working with livestock and really enjoy the animals.”