Olmeda-Geniec back with ‘my birds’ 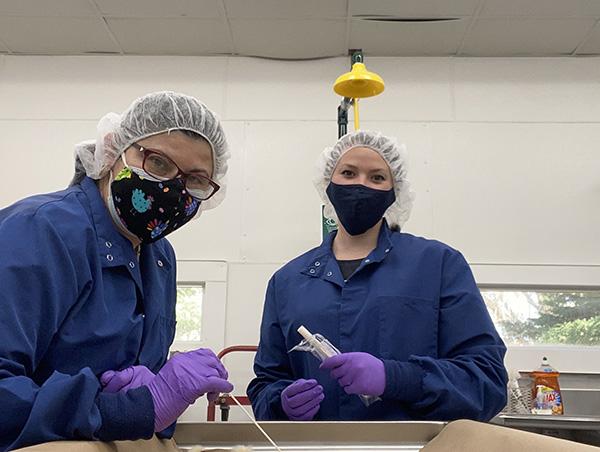 GEORGETOWN, Del. — Though she grew up in Puerto Rico, Dr. Nanette Olmeda-Geniec said becoming the poultry diagnostician for the University of Delaware’s Lasher Laboratory is a lot like coming home.
In Puerto Rico, her family kept livestock and poultry where she remembers collecting eggs for the family and people in the small mountain town.
An uncle was an animal science teacher and also raised chickens.
“He was kind of my mentor in that early phase,” she said. “I was interested in chickens all my life. I wanted to be a veterinarian my whole life.”
While in veterinary school at the University of Tennessee, Olmeda-Geniec said she learned through an internship about UD’s poultry science program.
“The next thing I know I was filling out an application for graduate school at the University of Delaware, and I hadn’t even finished veterinary school yet,” she said.
Once at UD, she said she was about to start master’s degree work on chicken anemia virus when her advisors switched her to a project on Marek’s disease to help meet the industry’s need in fighting the disease. Right away she was concerned about the work taking longer than the two years she had planned but added hard work and a lot of help from her advisors and the university farm crew got it done.
“The crew at the farm was fantastic because it got to the point where every single house, every single area over there, it was my birds,” she said. “Everything had my chickens in it because I was determined that I’m going to finish in two years, that’s it. And I did.”
Armed with that degree, she returned to Puerto Rico as a technical consultant for Elanco Animal Health working with poultry and swine companies by monitoring animal health status, presenting educational programs and technical information to their personnel. The job also took her to the Caribbean islands and Central and South America.
Five years later, Olmeda-Geniec had her sights set on a doctorate in poultry science and returned to UD, this time focused on finishing in three years, which she did.
She said after that she had the chance to apply for the Lasher diagnostician position but, having just gotten married, decided, “it’s not the time for me to do that.”
She returned to Elanco, working eight years as a poultry technical consultant providing services to Delaware, Maryland, Virginia, North and South Carolina and Pennsylvania, serving the same poultry companies she now works with through the Lasher Lab. For the last six years she was the principle research scientist within the Elanco’s Research and Product Development Nutritional Health team.
When the Lasher position opened up last year with the departure of Dr. Dan Bautista, Olmeda-Geniec said a friend called urging her to apply. She said she was at first hesitant, having her enjoyed the work she was doing at Elanco but as some time went by — and more urging from the friend — she took the leap for a job she’d always wanted, and started in January.
The Lasher Laboratory, a Biosafety Level 2 Lab at the Elbert N. & Ann V. Carvel Research and Education Center in Georgetown, is often referred to as the front line of disease surveillance for the poultry industry on Delmarva. The lab provides rapid and comprehensive diagnostic services to the commercial poultry industry, as well as owners of small non-commercial hobby and backyard flocks.
Diagnostic services available at Lasher Laboratory include poultry necropsy and clinical diagnosis, bacteriology (including food safety), mycology, serology, and molecular diagnostic testing.
It also provides research assistance and outreach to the community, communicating disease threats and methods of control and prevention.
“Delmarva has so many chickens and it’s so small in a sense,” Olmeda-Geniec said. “So, it’s very important that we need to be very acute on what is happening in each house or each farm or each area to make sure that we keep them healthy and away from any dangers such as those very bad diseases.”
Reflecting on taking the new job, Olmeda-Geniec said there are opportunities that come about fairly often, some that come “once in a blue moon” and some that are once in a lifetime.
“I was like, ‘this is the moment,’” she said. “And it worked great. It was like going home.”
She said the teaching aspect of the work, whether it’s students, poultry company employees or growers, appeals to her most. She said it’s the kind of work she saw her mentors doing throughout her career.
“It’s not what I can teach. It’s what they can learn from it and make it better,’ she said. “It’s a ramification that helps others in a big way.”
In terms of outreach, Olmeda-Geniec said she is eager to meet with growers on their farms and see more poultry company personnel in-person as more COVID-19 restrictions are relaxed.
Until then, phone calls and Zoom meetings will suffice, keeping communication lines open with other labs and those more closely involved in production.
“I think it’s great in the sense that I see that communication,” she said. “I think it’s very important because at the end of the story I think everybody benefits. It’s the same goal. You want to have a healthy, wholesome chicken that you can provide to the customer no matter where it comes from.”