PORT ROYAL, Va. — Along the banks of the Rappahannock River, Camden Farm is steeped in U.S. history.
It was established in 1785, when John Pratt came to Caroline County from King George County and purchased 661 acres, naming it Camden.
The manor house was built between 1857 and 1859 and during the Civil War, its tower was destroyed by a Union gunboat.
Though the tower was never restored, the house is regarded as one of the most complete and best preserved Italianate country houses in America and was listed in the National Register of Historic Places on Nov. 17, 1969.
For all its history, Camden Farm has continued to provide opportunity to those who have managed its land.
In 1970, Johnny Davis was 23 and made the move from his family’s farm in New Kent County to Camden after planting his first of many wheat crops there the year before.
Loy Harrell, founder of Old Dominion Grain was a mutual friend of Davis and then Camden owner, another John Pratt, and knew Pratt was looking for a farmer for his land. For Davis, a chance to farm close to 1,000 acres in one block was something he didn’t want to pass on.
“I just decided I wanted to give it a shot,” Davis said. “This was an opportunity for me. It doesn’t come around but so often.” 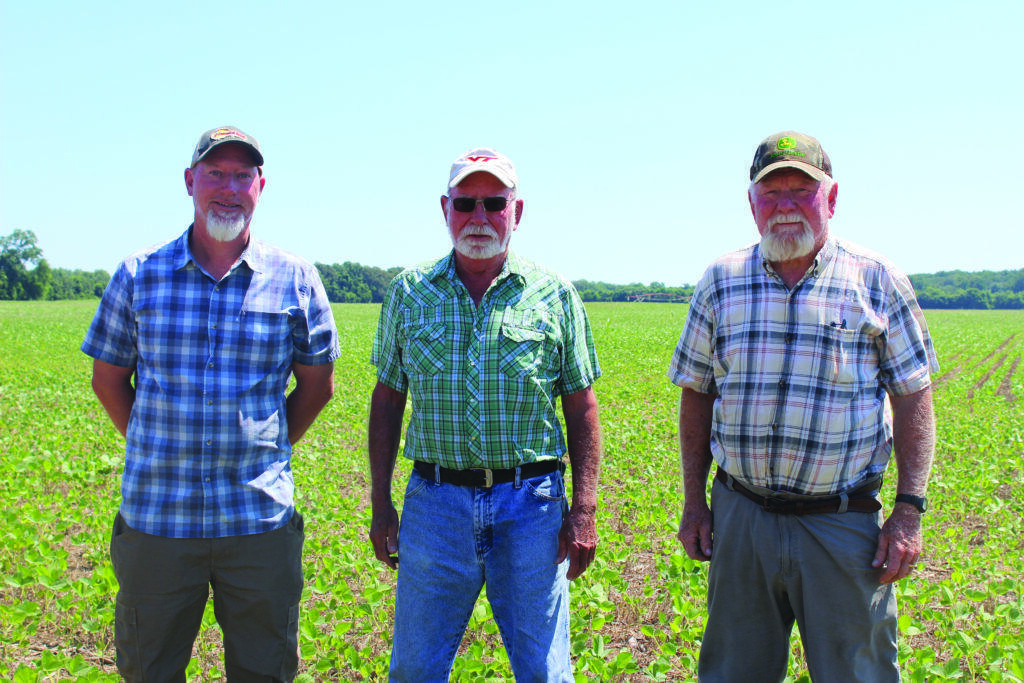 From right, Jonathan Davis, Johnny Davis and Tommy Hicks represent the farming history at Camden since 1969. Photo by Sean Clougherty

It wasn’t without its challenges, though. Cactus growing on the riverbank speak to how dry the area and soil can get on parts of the farm.
Davis said when he came to the farm, a small beef herd was part of the operation.
“At that time, it was about half in pasture, fences and wiregrass,” Davis said.
Still, Davis said there’s no other job he wanted than farming.
“For me, there’s no better joy than looking at a crop as it’s green and growing,” he said.
Davis sharecropped the land for five years with Harrell and Harrell’s brother, Rufus, who owned a fertilizer company, before shifting to a cash rent arrangement.
At about that time, in 1975, Davis hired Tommy Hicks. In the same year, Davis’ son Jonathan was born.
Hicks’ father ran a nearby country store and Hicks recalled Davis came by one day looking for help moving an auger around the farm.
“I was coming out of the Army and I needed a job,” Hicks said. “It was just a chance meeting, I guess.”
That chance meeting turned into a farming career for Hicks. The two worked in tandem for decades, growing corn, soybeans, wheat, barley and canola for a few years in the 1980s.
“He’s the mechanic,” Johnny said of Hicks. “I did the paperwork and administrative work and we both worked in the field.”
At age 64, Davis had a life-threatening health issue that triggered his thinking on retirement. He told Hicks he wanted to be done in two years, but Hicks said he was planning to farm longer than that. That led to another opportunity with Hicks purchasing the farming business from Davis.
Knowing Hicks would need someone else to keep the operation going at the same scale, Davis suggested he approach Jonathan about a partnership. Jonathan grew up working on the farm but had been living in Christiansburg with his wife and three children and working in the Office of the Provost at Virginia Tech for 13 years. He said he hadn’t given much thought to coming back to the farm until the offer was on the table.
“Tommy was instrumental in the operation becoming a success,” Jonathan said. “So it was intimidating to say the least.”
But like his father 50 years ago, Jonathan said even though it meant “a complete and utter upheaval of everything,” he saw it as an opportunity.
“It was basically a now or never. You don’t just walk into it. It’s a high dollar business to get into,” he said. “When it really came down to it, it was really hard to fathom somebody else coming in and taking over and it coming to an end.”
In 2013, Hicks with Jonathan on board, formed Mill Creek Farms and the operation now manages 2,200 acres in an even split of corn and soybean acres. Wheat fell out of the rotation several years ago but as commodity prices have rallied to record highs this year, Jonathan said they’re giving it a hard look again.
“We were this close to growing some this year and just couldn’t come to a decision,” he said, gesturing with his thumb and index finger nearly pressed together.
When Jonathan made the switch and moved back to the farm, it was the same land he had worked on but the management had drastically changed. He returned to no-till as the dominant system and the equipment was far and away more advanced than when he left.
“There was no familiarity with really any of it,” he said. “It was maybe not technically starting from scratch but it was pretty close.”
In the nine years since the move, Jonathan said other additions have helped the operation move forward.
They added Gerry Dickinson to the Mill Creek Farms workforce who also operates his own Rappahannock Seed business.
“He does everything,” Jonathan said of Dickinson.
They’ve also employed efficiency-gaining tools like variable rate planting and fertilizer application and zone soil sampling.
“I think the next frontier is variable rate on the irrigation,” Jonathan said. “I don’t know how realistic it is now, but we certainly have the fields for it.” Currently, about 750 acres of the operation are irrigated.
They’ve also “aggressively” expanded their use of cover crops. Jonathan noted last year all their acres had some type of cover planted going into winter.
“We’ve dabbled with different things,” he said, noting a few of their cover crops are an oats-clover mix, canola and annual ryegrass. “The weed suppression is really good, but really it helps you get on your fields quicker. It looks crazy and sloppy at times but we’ve got some fields that got going really well and look great.”
A big change on the horizon for Mill Creek Farms is a significant expansion of its 72,000-bushel grain storage facility. Jonathan said they are looking to more than double their capacity to give them more harvest flexibility and options in marketing more grain throughout the year.
It’s an investment; it comes with a cost, but offers a lot of opportunity.
Subscribe