Oyster industry asks state to clamp down on poachers 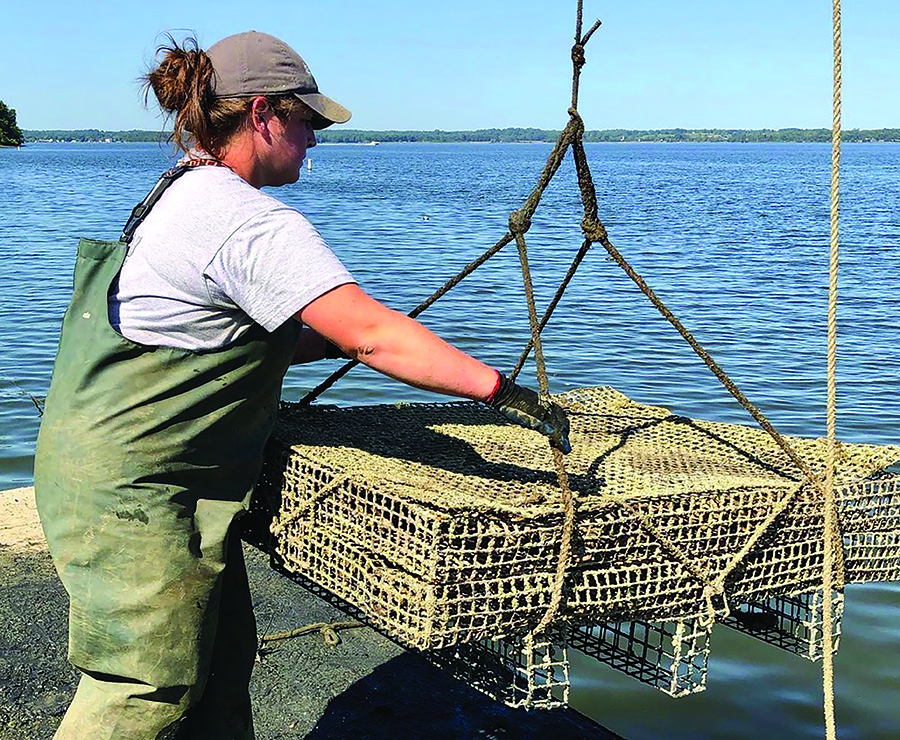 About four years ago, Jill Buck could stand on occasion in the yard of her waterfront home in Calvert County, Md., peer through a riflescope and watch a man hundreds of yards away dive into the Patuxent River to steal her oysters.

She would call a police hotline at the Maryland Department of Natural Resources, and after she hung up, the alert would squawk across the police radio. The thieves, who were listening to the same channel, would flee before law enforcement arrived. Once, it was too windy for police to even put their boat in the water.

“It’s like somebody coming into your house and taking your furniture and you’re not able to do anything about it,” said Buck, co-owner of Patuxent Seafood Co. in Broomes Island, who leases 15 acres of state riverbed where she and her husband Andy grow oysters year-round. “It made me very angry.”

After going through that process several times, the thefts eventually stopped. But it’s a persistent problem for aquaculture growers regionally and nationwide, where oysters can be a lucrative target for poachers. They currently sell for between $45 and $65 a bushel.

Now the Maryland Farm Bureau is trying to clarify and tighten state laws to better prosecute and prevent oyster theft. At its December convention, held virtually, the Farm Bureau approved a resolution submitted by members from St. Mary’s County, where most of the state’s aquaculture leases are located. The resolution calls for new legislation that would make aquaculture theft an automatic felony for those caught stealing oysters multiple times or in sufficient quantities. The Farm Bureau also wants the state to prosecute anyone who knowingly possesses illegally harvested oysters.

The resolution stems in part from a report last year by the University of Maryland Agriculture Law Education Initiative that called current theft laws inadequate. As it stands, people illegally removing oysters can lose their tidal fishing license for a year after the first conviction and two years following subsequent convictions. It’s not a sufficient deterrent, the report said.

A criminal charge requires the state to show that the area is marked with buoys or signage indicating ownership. (Some thieves get around this by first cutting the buoys so they drift away.) The natural resources department can levy fines, and growers can pursue civil charges, but the state’s legal community hasn’t consistently prosecuted aquaculture theft, and it can be difficult for the overtaxed department to catch thieves, who often steal at night. The report also criticized the lack of deterrents to those knowingly selling stolen oysters.

“Other states have innovative laws directed at the thief, the buyer and members of the legal system in order to deter oyster poaching that could be useful in Maryland,” the report said.

The report recommended boosting fines, seizing boats and other equipment from those convicted of poaching, and creating for oyster buyers a searchable public database of anyone with a suspended or revoked tidal fishing license. The report also recommended making it illegal to buy oysters from anyone without proper licensing.

Lawmakers have pursued oyster theft legislation before with the support of the Farm Bureau and BaySavers, an Annapolis environmental nonprofit, but it hasn’t yet successfully made it through the State House, said Colby Ferguson, the Farm Bureau’s government relations director. Efforts to pursue new legislation again this year may be complicated by the COVID-19 pandemic, which has limited the legislature’s latitude to operate. But the Farm Bureau resolution allows the organization to be more directly involved.

Stopping thieves in the act isn’t easy either. She recalled another time when she watched a thief in the act and was unable to intervene herself due to a low tide. Any help, whether from the department or the General Assembly, is welcome, she said.

“I wish there was a way we could be compensated if the police could not respond,” Buck said. “The only thing we could do is fill out a report.”