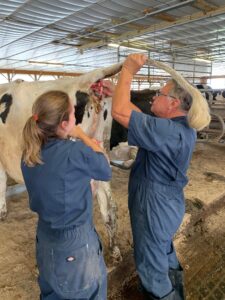 LITITZ, Pa. — Milk with omega-3 fatty acids — typically added via fish oil at the processing plant — has been available to consumers for some time.

But a Pennsylvania dairy recently debuted the nation’s first omega-3 milk produced entirely by a cow.

The Market at Oregon Dairy in Lancaster County began last month selling its first omega-3 dairy products, including cream, whole milk, 2-percent and chocolate milk, made by supplementing cow feed with a patented nutrient that includes flax and algae.

“The animal does it all and makes the food better for us,” said Bernie Hansen, founder of NBO3 Technologies, a Manhattan, Kan., company that developed the feed over nearly two decades.

Omega-3 fatty acids, found naturally in fish and plant oils, have been shown to reduce heart disease, cholesterol and high blood pressure, but it’s not clear, according to the National Institutes of Health, whether these benefits come from simply eating those foods or from the omega-3s in them.

The story to create the market’s new milk products began in the mid-2000s when Hansen began sponsoring research started in the late ‘90s by Jim Drouillard, a Kansas State University professor investigating the effects of flaxseed on beef cattle. Hansen already had a long career in food innovation, producing ready-to-eat meat entrées he eventually sold to Hormel in the early 2000s.

This research lead Hansen’s company into the production of algae, a significant source of omega-3 fatty acids. Up to that point, algae production had been relegated mostly to academic labs, and NBO3 needed to produce thousands of pounds of it, Hansen said. It’s grown in open ponds and requires sunshine, carbon dioxide and saltwater.

His company found a government algae farm in New Mexico owned by the U.S. military, which was trying to produce jet biofuel from the organism. The military eventually succeeded, but it sold the farm.

“It’s very expensive. Too expensive for a fuel,” Hansen said. “We were very fortunate to find out about this and get in and buy the farm.”

It took years for NBO3 to develop the feed additive, which it calls greatOPlus. The strain of algae in the product balances the cow’s ratio of omega-6 fatty acids — which can be harmful — with its omega-3s. The product is designed to bypass the cow’s rumen where it would typically break down. It’s digested farther down the digestive tract, into the animal’s bloodstream and the udder, Hansen said.

“It’s never been presented before the way we do it,” he said. “What our technology has done, which is key, is we let the cow make it.”

Once the additive is sifted into the cow’s feed, it reduces stress and inflammation in the herd and results in a calmer, longer life for the animal, he said. Oregon Dairy worked over the last year with Lancaster Veterinary Association and NBO3. Critically important to Maria Forry, one of the family farm’s partners: It doesn’t change the milk’s flavor or the herd’s health.

“Our milk tastes the same as it always has, so that’s been a real positive in my mind,” she said. “We always had good herd health. The herd has continued to remain healthy.”

NBO3 was led to the Pennsylvania farm after Dr. Bob Stoltzfus of the Lancaster Veterinary Association alerted the company to the farm’s progressive approach to dairying, Hansen said. Oregon Dairy was also searching for a reliable niche market to serve.

The dairy’s omega-3 milk isn’t more expensive than its more traditional milks, Forry said. The operation has been in business since the 1970s.

The omega-3 products have only been available for several weeks, and it’s too soon to gauge their popularity with customers, Forry said. Now NBO3 is working on developing other products for the farm such as bacon.

“I’m excited about more possibilities that are coming down the pike with it,” she said.

“We’re proud as a peacock,” Hansen said. “We picked a good partner in Maria and Oregon Dairy.”