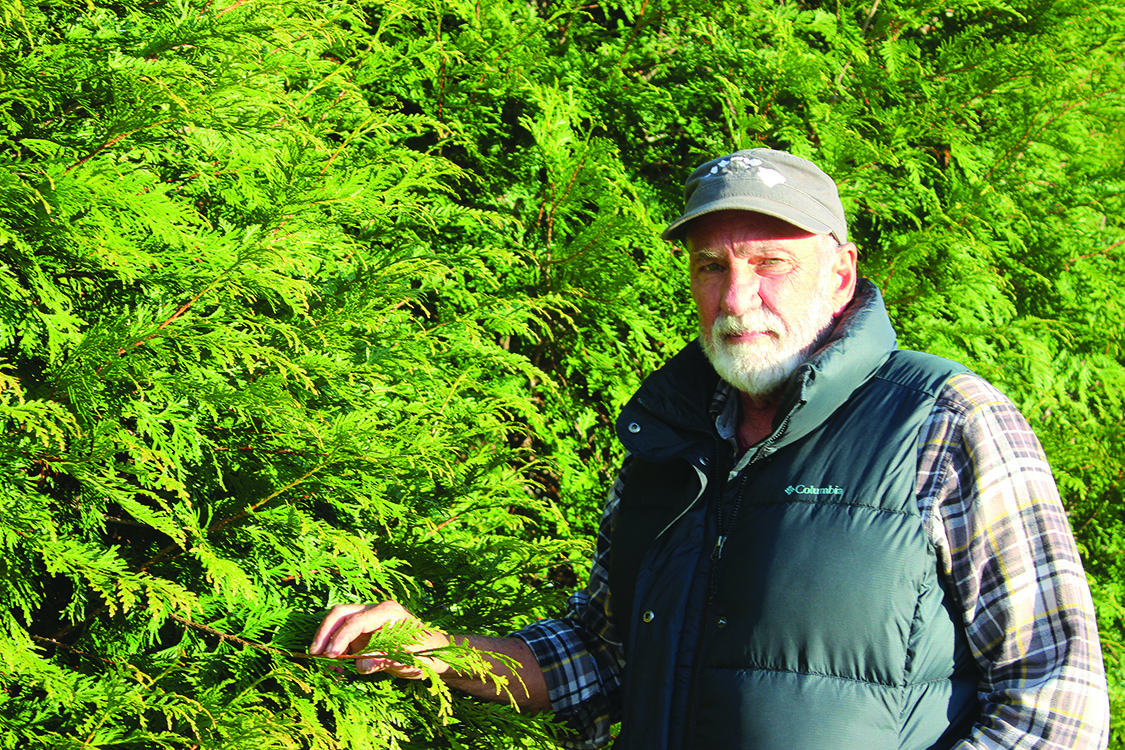 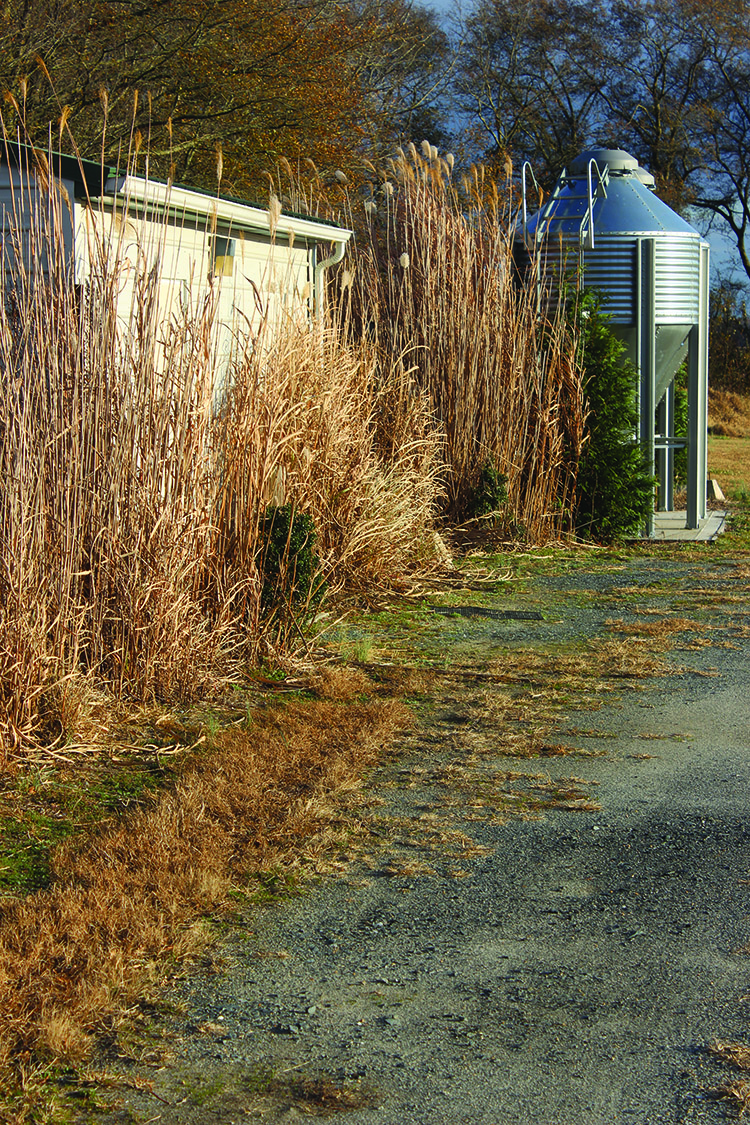 Miscanthus grass is one plant that’s been studied for use in poultry house buffers, especially in front of tunnel fans. (Photo by Sean Clougherty)

GEORGETOWN, Del. — Jim Passwaters never raised a flock of chickens but his mark on the industry is evident on poultry farms throughout Delmarva.
Passwaters is retiring at the end of the year as Delmarva Chicken Association’s vegetative environmental buffers coordinator after helping to plant more than 86,000 trees and grasses on poultry farms since 2007.
As someone who “can’t sit still,” Passwaters was running a painting company in the 1980s to supplement his full-time work as a Captain for enforcement in Delaware’s Division of Fish and Wildlife. He said he grew tired of the painting and a friend suggested the two of them start a landscaping business. In 1985, Passwaters started Sussex Landscaping, focused mainly on commercial sites and new developments.
In 2001, another friend working at USDA’s Natural Resource Conservation Service asked if his company would work with the agency to plant trees around poultry houses. He said they planted about 40 buffers on poultry farms before signing on with DCA but added at the time, “I had no idea why we’re doing it.”
At that point in time, buffers were gaining attention for multiple reasons, said Bud Malone, retired University of Delaware Extension poultry specialist who did a lot of early research on vegetative buffers in the area. As more development came to Delmarva in the 1990s and 2000s, the buffers could help with neighbor relations, and the conversion to tunnel ventilation no longer required natural air flow through the houses and concerns began to arise about emissions from the tunnel fans.
At a meeting of DCA’s grower committee in 2000, Malone proposed establishing an environmental buffers program for poultry farms and received quick approval.
“The timing was right to pursue that at that time,” Malone said.
After a tool kit for buffers was developed, DCA set out to find a coordinator to promote the use of buffers and oversee installation.
Malone said Passwaters was a “perfect selection” to head the program, a first of its kind in the United States.
Malone said he worked well with the many agencies that were involved and was always cost conscious.
“Jim had the knowledge, the practical implementation of the plans and experience of the kind of plant material that worked,” Malone said.
Passwaters said one of the first efforts was to offer training for landscapers to get acclimated to buffer installation. Four companies came, but none showed interested in taking installation jobs, Passwaters said.
“Everybody thinks it’s something different but it’s really a simple process,” he said.
That’s left much of the installation work to Passwaters’ company, which he credits his son Andrew for streamlining the process to take hours what used to take days.
“They know exactly what they’re doing,” he said of Andrew and their two employees, who can plant about 400-500 trees in a day. “It keeps me busy just trying to keep them busy.”
When they had trouble finding trees at 1 or 2 feet tall to fit many project specifications, they started growing their own.
“We can’t quite grow everything to do everything but we’ve found other sources,” he said.
Passwaters said buffer use and research has gone in several directions in order to fine-tune their effectiveness and add more benefit.
“I credit Bud Malone with a lot of this,” Passwaters said of getting ahead of neighbor and environmental issues with buffers. “He had the foresight to see that this was getting to be a problem.”
Over the years, with researchers like Malone, conservation groups and state agencies, they have expanded the kinds of plants permitted for buffers, researched planting grasses near tunnel fans to block particulate matter, looked at buffers between houses rather than just the perimeter of the production area, experimented with salt-tolerant plants to grow in areas where water softeners are used on farms and periodically flushed, and using fruit and nut trees and bushes in buffers to add value in crop production.
Establishing pollinator habitat has also become more popular on farms, adding plant diversity and demand for native plant material.
Malone said research has shown properly-installed buffers can lead to energy savings by impacting ground temperature near the houses and the houses’ roof temperature.
By blocking prevailing winds, buffers can reduce back pressure on ventilation fans also saving on energy costs.
Buffers have also shown to limit travel of some airborne diseases that affect poultry and reduce groundwater nitrates. Malone also said research is ongoing with UD’s Hong Li and Penn State’s Paul Peterson carrying the torch and making important strides.
With Delmarva a leader in buffer use and research, Passwaters has advised on projects in Arkansas, Missouri, North Carolina and France.
But he said working on Delmarva, where he has lived all his life, has been its own adventure. The buffer program has taken him to parts of the peninsula he said he never would have visited otherwise and he’s enjoyed working with the farmers.
“It’s a very diverse population,” he said. “The one thing I really enjoyed is all the different cultures. It’s very enjoyable, that aspect of it,” he said.
While he’s leaving DCA, which will find a new buffer coordinator to continue the program, Passwaters isn’t disappearing from the industry. Sussex Landscaping will continue buffer installation and growing trees, grasses and native plants, with Andrew taking the reins. Passwaters said retiring mainly allows him and his wife the freedom to travel more, be it Onancock, Va., for lunch or Mexico for two weeks.
Remember, he doesn’t sit still very long.