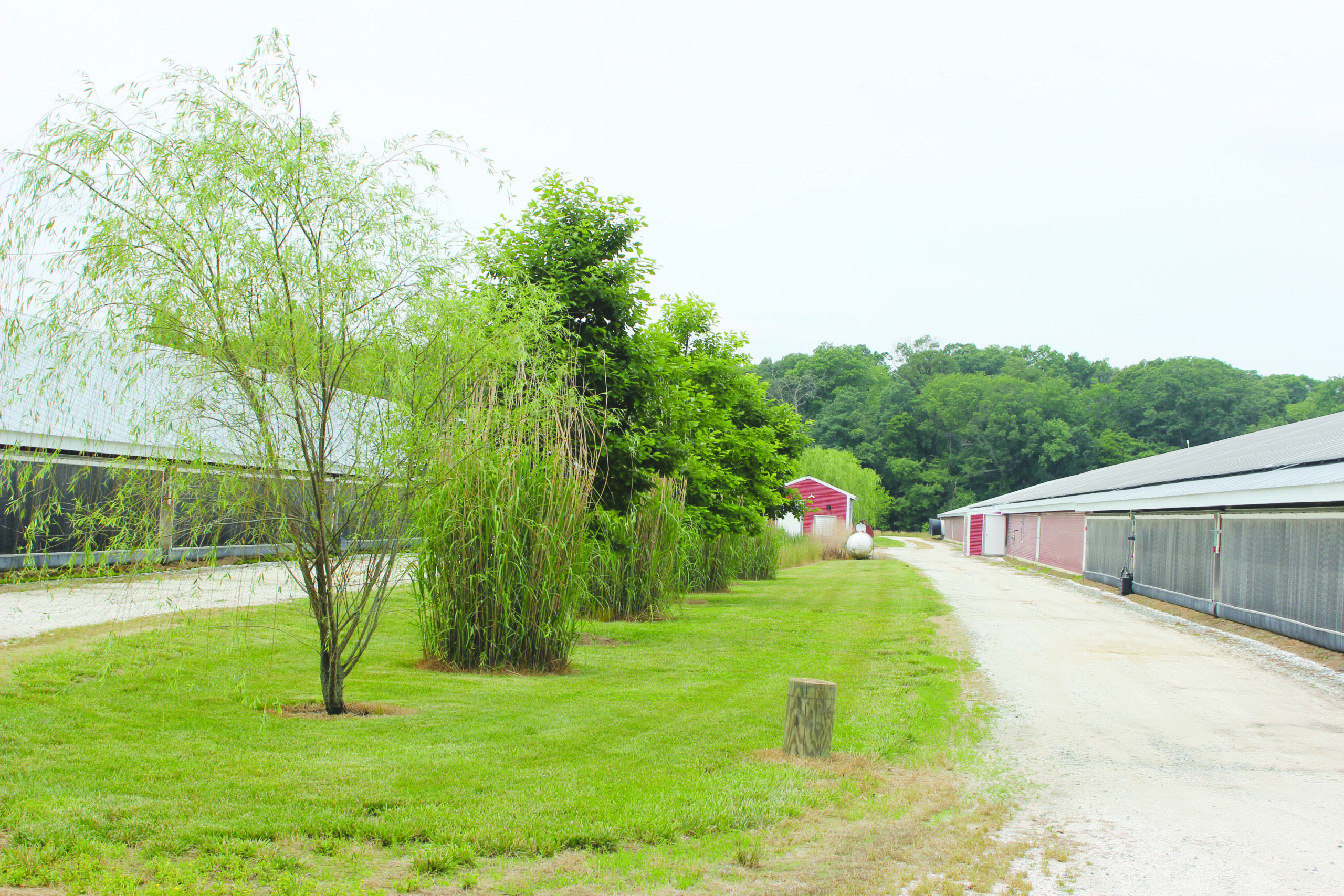 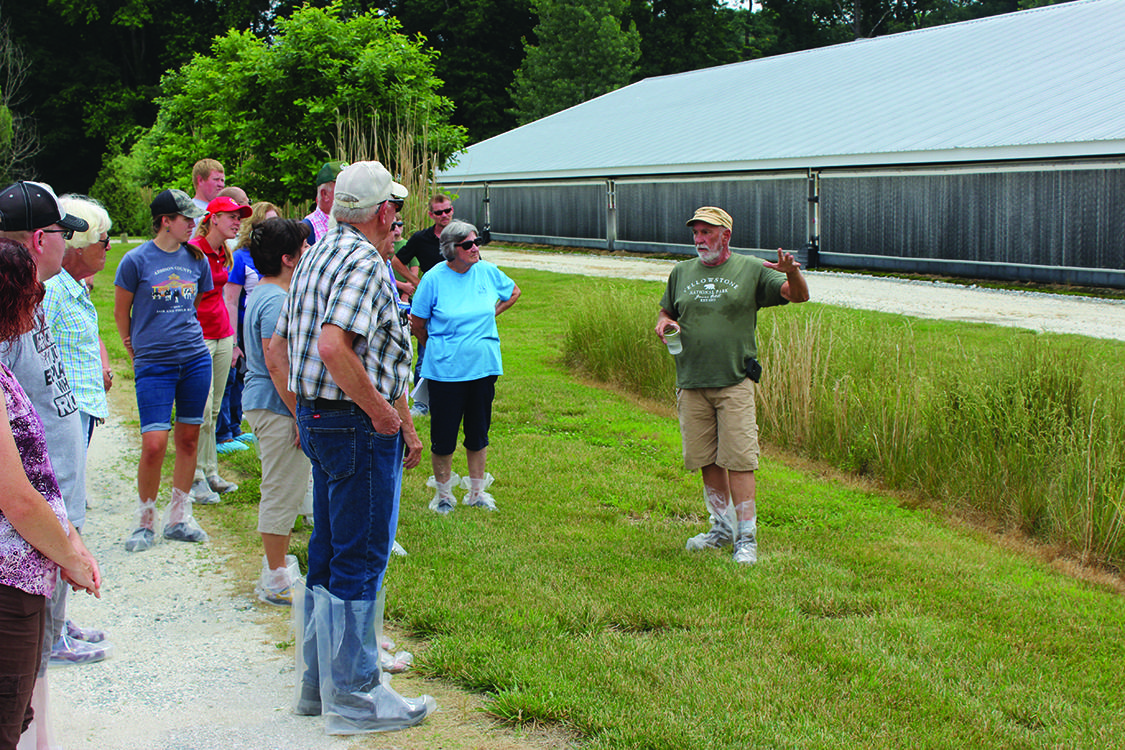 Jim Passwaters, right, vegetative environmental buffers coordinator for the Delmarva Chicken Association leads a group of poultry farmers around Terry Baker’s farm, pointing out things that can be done to add to the farm’s sustainability. (Photo by Sean Clougherty)

MILLSBORO, Del. — When vegetative environmental buffers started to grow on Delmarva poultry farms, the focus was to get fast-growing trees established.
But buffers have evolved greatly, according to Jim Passwaters, vegetative environmental buffers coordinator for the Delmarva Chicken Association, from the species of trees to their spacing and other ways, tailoring them to reap certain benefits.
“I’ve always looked for opportunities for different things we can do,” Passwaters said during a June 9 field day for vegetative buffers at Terry Baker’s Sussex County poultry farm. “I just think there’s more to it than planting two rows of trees around the farm.”
Since 2007, Passwaters has developed and managed Delmarva Chicken Association’s free-to-members program that helps growers design, install, and maintain living buffers on their farms to improve neighbor relations and protect water and air quality.
At the field day, Passwaters led a group of poultry farmers around Baker’s Acres Farm, pointing out some of the different things they’ve done on farms.
He highlighted buffers that use multiple species, plants for absorbing fan exhaust and plants for meadows to entice pollinators.
Behind Baker’s chicken houses is a two year old pollinator garden planted with several native plants, including Joe Pye weed, bee balm, dog fennel, butterfly weed, black eyed Susan and others.
“These will self-seed and fill in as we go, and you can come back and spray for grass,” Passwaters said. “We’re hoping it takes about two to three years to make a good stand of it.”
Passwaters said interest in meadows has grown.
After Passwaters was awarded a $5,000 grant from Bayer to establish bee-friendly areas on 10 farms he said he had 35 farms wanting to participate.
“They’re great,” he said, “gaining in popularity all the time. But they’re not for everyone.”
Baker said planting trees and buffer strips around his farm wasn’t a lot different than when his family lived in a neighborhood; he wanted it to look nice.
The trees added to the property’s aesthetic, but also reduced dust, odor ,and as they grew, have contributed to energy savings by shading the houses.
“If you cool the air going into the chicken house, you can bring the temperature down 5-7 degrees,” Baker said. “That will save you a lot of energy and hopefully make you a lot of money.”
As buffers have evolved, so has tree choice. Willows and Leyland Cypress have fallen out of favor with Passwaters, but loblolly pine has become more popular, he said.
“We’ve found that loblolly pines will grow about anywhere,” Passwaters said.
Planting loblolly pines at least 10 to 12 feet apart helps reduce lower limb loss when the trees mature.
“That will give you the opportunity to plant something smaller or slower growing and it will fill in,” Passwaters said.
Ultimately, growers should plant what works well in their soil and is low maintenance, he added.
“Basically, it’s almost any tree that’s native,” he said.
A few growers have planted fruit trees and bushes along side their houses, stopping short of the fans, to get a “double function” of environmental benefit and fruit to eat or sell.
“If it’s the right person, it can work well,” Passwaters said. “The only problem we’ve seen with those is deer. They love them, too.”
Passwaters is set to retire from the buffer coordinator job at the end of the year, after helping plant more than 86,000 trees and grasses on farms, but it won’t be the end of planting around poultry houses.
“There’s still more to do,” he said.