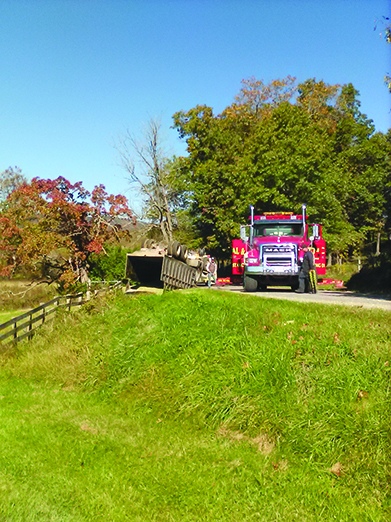 This overturned load of newly chopped corn illustrates how quickly something can go wrong while farming. The driver escaped unhurt but too many times this is not the case on roads where farm vehicles and other traffic share space. (Photo by Jane W. Graham)

NEWPORT, Va. — Farm accidents are a growing concern for the farming community across the country, leading industry groups and individuals to a intensify efforts to remind farmers to be careful.
A scheduled and well-advertised farm safety meeting here recently fell victim to a tropical storm even though all was ready for a day-long event at the local community center.
The potential attendees were apparently dealing with warnings of heavy rain and flash flooding.
“Safety/accidents don’t wait for pretty weather,” Extension agent Jeannie Layton-Dudding said early that morning in a message she sent on Facebook. “We are here rain or shine! We arranged to be inside. Come on over to Farm Safety Day at Newport Rec Center. Everyone welcome, not just the farming community.”
By mid-morning no one had showed up. The storm had prevailed.
Layton-Dudding later said she is still committed to getting the word out that farmers need to practice safety all the time.
Along with her perspective as ag agent for two southwest Virginia counties, Layton-Dudding is a farm wife and mother and an active farmer and added she is not alone in sounding the alert. USDA and Farm Bureau are among the leaders in cautioning farmers to be careful all the time.
She said the latest figures available from 2019 show farm accidents are up nationally.
“The biggest thing for me is that farm accidents are different from automobile and home accidents,” she said. “The trauma is different.”
Layton-Dudding said her awareness of the difference traumas comes from talking with medical personnel who deal with them.
Layton-Dudding stressed that farm accidents happen when people get in a hurry and the victims often don’t know what happened, she noted.
“It’s those simple little things that we shouldn’t do, but we do, simple tasks or short cuts,” she said. “We get to feeling comfortable around our machinery.”
The Virginia Farm Bureau Federation reported recently that USDA information shows most traumatic injuries that occur on farms involve interactions with machinery, especially during maintenance.
“With a lot of farm work taking place in the hours before and after other jobs, and the advances of new equipment, many accidents occur while farmers are working alone and stressed to complete tasks in short order,” said Dana Fisher, chairman of the Farm Bureau’s Safety Advisory Committee.
Fisher was quoted in a recent Farm Bureau article by Nicole Zema about Channing Snoddy who lost his arm in an encounter with a corn picker.
His story illustrates Dudding’s point.
He became frustrated with a jammed corn picker and grabbed at a corn stalk and was pulled into the rollers of the picker.
According to his account in Zema’s article, the next thing he saw was his arm dangling on the other side. He was held captive by the machine for about a half hour until a neighbor heard his cries for help.
The neighbor was able to turn the machine off following Snoddy’s directions.
Layton-Dudding referenced another accident that occurred when a famer with a round baler was working with a jam. No one actually knows what happened, she said, but the farmer died.
Layton-Dudding cited her own experience on her own family farm. She said she is very comfortable using the small tractor but when she gets on a larger tractor, she reviews the steps she needs to operate it safely.
“I walk myself through what I do,” she said.
Not all farm-related accidents are related totally to machinery or occur on farms. One recent one on a rural Virginia road occurred when a truck loaded with an estimated two tons of newly chopped corn turned upside down after rounding a curve. The driver escaped unhurt.
Farm Bureau points to ATV accidents as another cause for concern, especially for children. In a recent news release, the organization urged parents to consider safety measures when and if buying these for children.