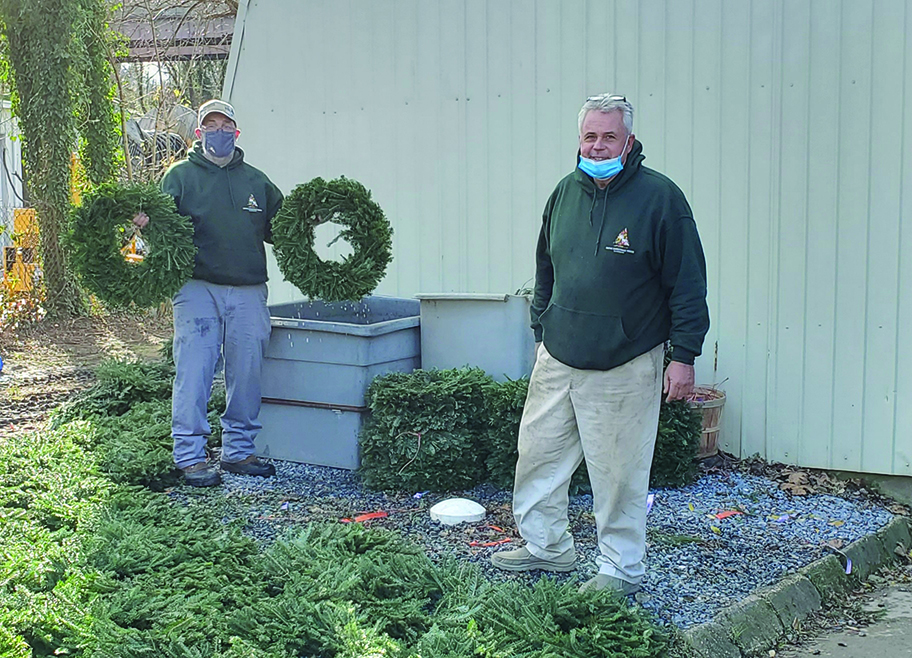 Butch Hindman, a staff member for Payne Christmas Trees, holds up two recently dipped wreaths. According to owner Andy Payne, right, “every wreath or length of roping gets dipped in our special sauce floral solution that keeps them fresh and makes them shiny.” (Photo by Joan M. Kasura)

ELKRIDGE, Md. — “Andy Payne’s a great guy. In my opinion, he has the best wholesale trees and wreaths in the area,” said Mike Healy, owner of Greenway Farms in Cooksville, Md., who purchases cut Christmas trees and plain wreaths from Payne Christmas Trees to supplement both his choose-and-cut stock and the wreaths he makes from his trees’ excess greens.
Several other commercial customers agreed with that assessment as they picked up trees of assorted heights, tree stands, and even a few decorated wreaths from Payne’s Elkridge location, which outside of November and December serves as the hub for his hardscape landscaping business.
In business since 1984, Payne quickly became known for offering high quality Christmas trees to the Baltimore community.
As he expanded his operation, in the early 1990s, he purchased a 60 acre Christmas tree farm in Bloomsburg, Pa., and seasonally sold at a half a dozen lots across Baltimore, Howard, and Carroll counties. Ten years later, it became “very difficult to run a landscaping business here in Elkridge and keep track of tree growth in Pennsylvania,” said Payne. “It simply became a full-time job to grow the trees, so I decided to sell it.”
Yet, “for two reasons,” he doesn’t regret the years he put into the growing end of the Christmas tree business.
“First, I know what to look for when I’m buying trees,” Payne stated, “and second, it gave me an enormous number of contacts in the industry.”
One of those contacts is Mark Zelazny, the managing forester at Quaker State Plantations in Bloomsburg, Pa.
A premium wholesale grower of Douglas and Fraser fir Christmas trees, Quaker State has been selling Payne a large portion of his yearly supply of trees for almost as long as he has been in the retail Christmas tree business.
Even though Fraser firs “can be problematic for a large wholesale operation to grow in Pennsylvania,” said Zelazny, “we’ve got the top two species — Fraser and Douglas — covered in multiple grades and sizes” for retailers like Payne.
In turn, Payne relies on wholesalers like Zelazny and Quaker State to supply not only his retail business, but also a wide variety of wholesale customers, including smaller retail tree stands and independent garden centers around the Baltimore region such as Poor Boys Garden Center in Parkville, Md., and choose and cut farms like Healy’s Greenway Farms.
Payne also “supplies a lot of big trees to commercial enterprises. I spend all the summer visiting tree farms to find the good stuff to my fill orders,” he explained.
Yet, despite a continually expanding business, Payne began losing access to the lots he had used over the years to sell his trees. So, in 2018, he made the decision to consolidate at his landscaping company’s Elkridge location and turn it into a true Christmas Holiday Market.
He renovated the old airplane hangar that used to be his landscaping company’s equipment shop, redoing all the brickwork and woodwork inside.
“The building is perfect,” Payne explained, “because it stays cold all day, which is what you need to protect the greens and keep them from drying out.”
“This is our third year here and we’ve expanded the market every year we’ve been here,” Payne continued, “This year we put the back room in and expanded our ornament selection. Next year, I hope to put a tent in the back and do even more.”
In the meantime, 2020 has thus far been “the busiest year ever” for both Payne Landscaping and Payne Christmas Trees. For landscaping, “outdoor living took on a whole new angle with the pandemic since everybody’s home.”
At the Holiday Market, they had their busiest Thanksgiving weekend, where “you could not get into our parking lot,” said Payne. And, on the “terrible, rainy Monday” after, “we sold 55 trees,” Payne exclaimed.
“Even though we can’t do some things this year like the cider, hot chocolate and marshmallows,” he continued, “we’re trying to get that Christmas atmosphere going throughout the market because people really want to get out and enjoy life a bit.”