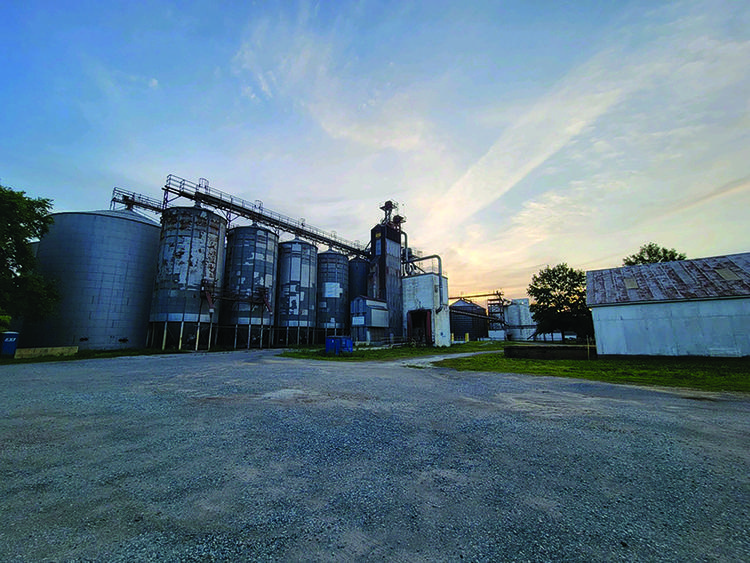 Perdue closed its long-standing grain terminal in Easton, Md., earlier this month because of a severe decline in business, a company executive said. The facility had been in operation since the 1930s. (Photo courtesy Mike Mielke)

The amount of grain delivered to the mill declined by more than 40 percent over the last four years, said Bill See, company spokesman. The facility had been in operation since the 1930s.

“We have been very transparent with farmers about our plans for the grain facility and understand the inconvenience of this closure,” See said in an e-mail to The Delmarva Farmer. “We value our relationship with our grain farmers and continue to work with them to ensure they have a home for their grain.”

Regional farmers said the May 31 shuttering marked the end of an era in Talbot County agriculture. A local businessman and farmer, J. McKenny Willis Jr., launched the operation by converting a furniture factory into a mill for local farmers with custom feeds. It changed hands several times over the last century, but struggled as the county’s population grew and its agricultural acreage shrank. Between 1969 and 2017, cropland in the county declined about 12 percent to about 81,000 acres, according to USDA data.

“It’s always sad to see a staple of the ag community close,” said Shannon Dill, a University of Maryland Extension agent who once lived near the facility. “I loved seeing the trucks come in… and all that you would see during harvest, but I understand the economic side.”

Several farmers said the mill’s decline in business was likely from a lack of skilled workers and investment in recent years by Perdue and not a lack of supply. Growers increasingly chose other local grain outlets over the 2.4-acre facility near Needwood Avenue and Higgins Street, Dill said.

“During harvest there’s just so many moving parts, you can’t wait in line,” she said. “I think people knew (the closure) was kind of coming because there hadn’t been investment in the facility.”

“They were kind of putting Band-Aids on it,” said Mike Mielke, a county grain farmer.

Farmers also said the surrounding town had grown less amenable to the facility’s operation as the region grew into a bedroom community for commuters and retirees. Last year, the town entertained a redevelopment proposal that would have transformed the site’s 10 silos and its elevator into The Granary at Easton — more than 40 residences, including multifamily and single-family units as well as penthouses.

The closure could complicate upcoming harvests for several growers. Mielke, for instance, signed a contract to grow wheat for Perdue in the spring.

“We weren’t really happy about it,” he said. “We would not have contracted with them in the first place if we knew they were closing in June. … They kept us holding the ball there.”

He said he hasn’t determined where he will move his harvest but isn’t thrilled about higher trucking costs, including gas. He’s also skeptical about plans to renovate the silos.

“I’ve seen too much stinky grain come out of those bins,” he said.

Farmers still have two markets in Talbot County: Mountaire’s grain facility in Trappe and two operated by Nagel Farm Service in Wye Mills and Cordova. Perdue also operates 12 grain elevators across the Delmarva region. Last year, the poultry integrator surprised another community of growers when it announced it was closing an elevator in southern Anne Arundel County. The company delayed its plans for two years after state and county officials urged Perdue to reconsider on behalf of growers. Regional officials are still trying to save the facility, and some farmers fear its eventual shuttering could devastate smaller Southern Maryland farms that lack cost-effective transportation for their harvest to more distant markets. The Easton facility’s closure will be much less consequential.

“We do have other places,” Mielke said.

But the grain mill’s place in Easton history was clear, he said, after he reported the mill’s closure on his Facebook page, including several photos. More than 230 people shared the report on their own pages, many of them mourning the loss of an unofficial landmark and a symbol of the county’s agricultural heritage.

“I have spent a large portion of my life waiting in line (at the mill) to be unloaded talking with fellow farmers, many who have passed away,” Mielke wrote. “Will Easton’s mill end up like St. Michaels with micro breweries, wine tasting and craft shops? This quiet move is so indicative of the fate of farming in the region and our struggle to balance growth while maintaining what made our region so attractive.”

After Willis launched the mill in the 1930s, he added grain drying and storage to the site. He offered the first broiler contracts to local growers in the 1940s, paving the way for the modern integrated poultry industry. His company, J. McKenny Willis & Sons, grew and eventually merged with St. Michaels Milling Co. It acquired the Burris Processing Co. in 1961 and formed Bayshore Foods Inc. ConAgra took over the facility following a 1982 merger before Perdue later acquired it.