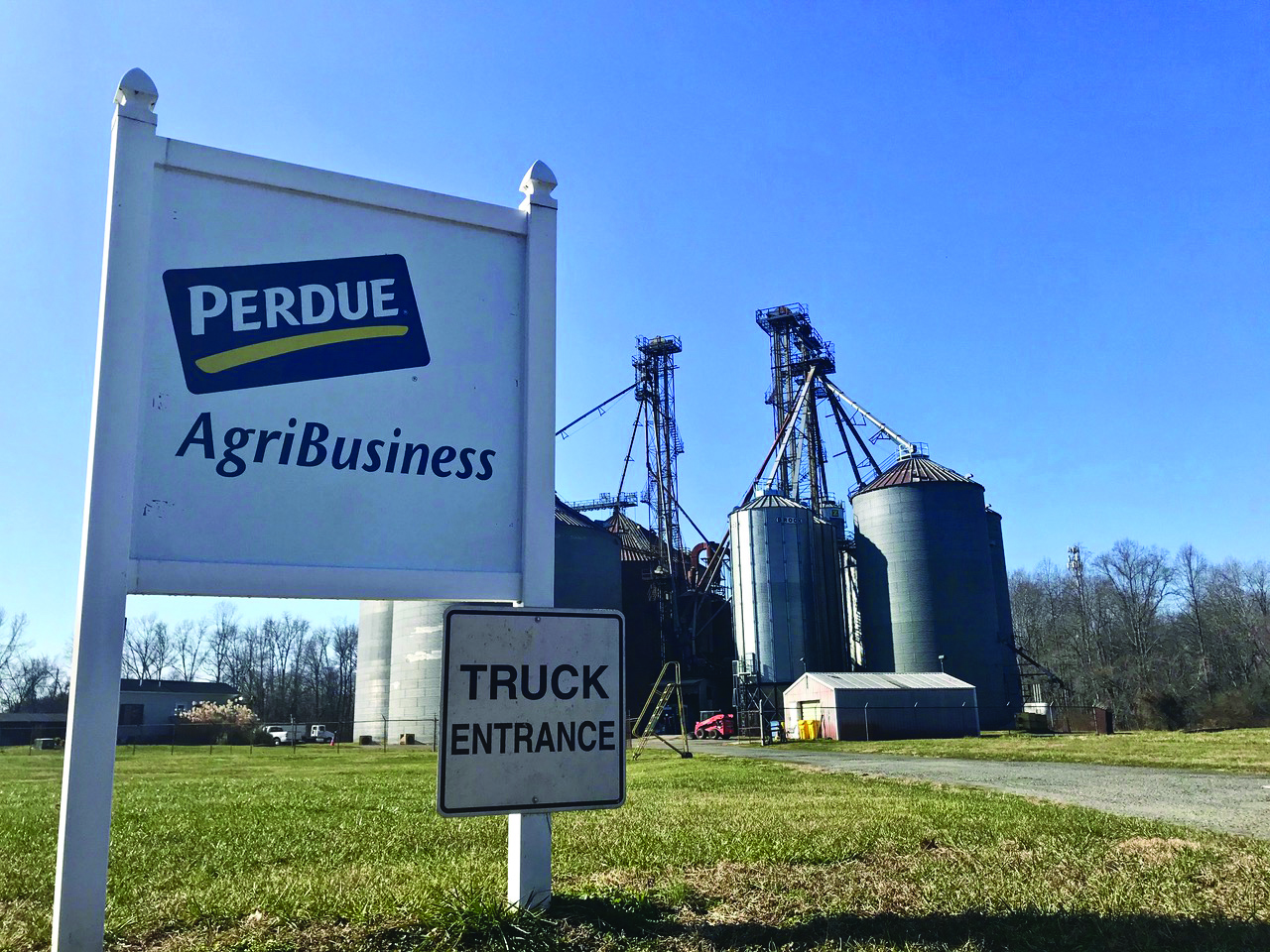 Perdue AgriBusiness announced this month it is closing Southern Maryland’s largest grain elevator in March. Regional growers said they’re unsure where or how they will transport their grain in the future. (Photo by Jonathan Cribbs)

LOTHIAN, Md. — Perdue Agribusiness announced this month it will shutter Southern Maryland’s largest grain elevator in March. Farmers in the region said the surprise closure will force them to truck their grain elsewhere or stop raising those crops.

Perdue began calling contracted growers in early January about the company’s plan to close the grain elevator, which first opened in Lothian in southern Anne Arundel County about four decades ago. The company said the facility would stop accepting grain Feb. 26.

Perdue released a brief statement Jan. 15 saying it hopes to close the elevator for good March 31.

“We are offering alternative marketing and logistical solutions to facilitate ongoing relationships with (farmers),” the statement said. It did not specify what those solutions were.

The closure will significantly affect farmers in Southern Maryland, who said they’ve grown accustomed to trucking their grain just a short distance. The suburban region’s grain community lacks the necessary transportation infrastructure, and many growers do not have relationships with truck drivers or own the kind of trucks they might need to move their harvest to other elevators across the region.

Kayla Griffith, 32, raises grain, hay, produce and poultry with her father, Jeff, on about 1,200 acres in the region. She said she and her father aren’t sure how they’ll respond to the closure. They could hire truck drivers or build grain storage on their farm.

“My concern is, yes, maybe my dad and I would be able to put up some grain bins,” she said. “But I’m afraid that there’s a lot of smaller farmers in Southern Maryland that might not be able to do that, and I don’t want to see them go out of business.”

And all of it, of course, would add cost to the operation.

“There’s not much profit in the grain market anyway,” Jeff Griffith said.

In preparation for spring planting, he said he had already purchased seed and fertilizer under the assumption he would grow again for Perdue this year. He typically trucks 45,000-50,000 bushels a year to the Lothian elevator just a few miles from his farm. His trailer hauls 900 bushels at a time — a daunting task if he had to drive up to 3 hours round trip to another elevator, say, on the Eastern Shore.

“I truthfully don’t see how I can get all that grain out of the field and haul it in a timely manner,” he said.

Ben Wood, a Huntingtown grower, said he was told that the million-bushel elevator was costing Perdue $1 million a year to operate. The company owns 13 grain elevators in Maryland. Closest to Lothian is its Curtis Bay facility in Baltimore. Wood said many farmers have openly wondered why Perdue didn’t give growers more time to adjust to the closure, particularly when the company buys from both Maryland and out-of-state farmers and ostensibly needs the grain.

“Someday you could see this happening, but you didn’t think it was going to be right now,” he said. “It just seemed like it came out of nowhere.”

Inclement weather delayed the most recent harvest and, subsequently, Perdue’s announcement of the closure, said Diana Souder, a company spokesperson, in an email. Harvest activity at the facility peaks from October through December.

“Since inbound truck activity is almost nonexistent outside of this harvest time frame at this site, customers weren’t affected,” she said. “We shared our plans regarding this operation with all affected associates and partners with ample time to facilitate a seamless transition for all involved.”

Southern States built the elevator roughly four decades ago, farmers said. It was eventually sold to Perdue. Several growers said they would like Perdue to sell it again — to someone who will keep it open.

“We’ve had a good relationship with Perdue,” Kayla Griffith said. “There’s no hard feelings, but we wish there was another solution besides selling.”