Pine Hill Farm began with a simple act of kindness 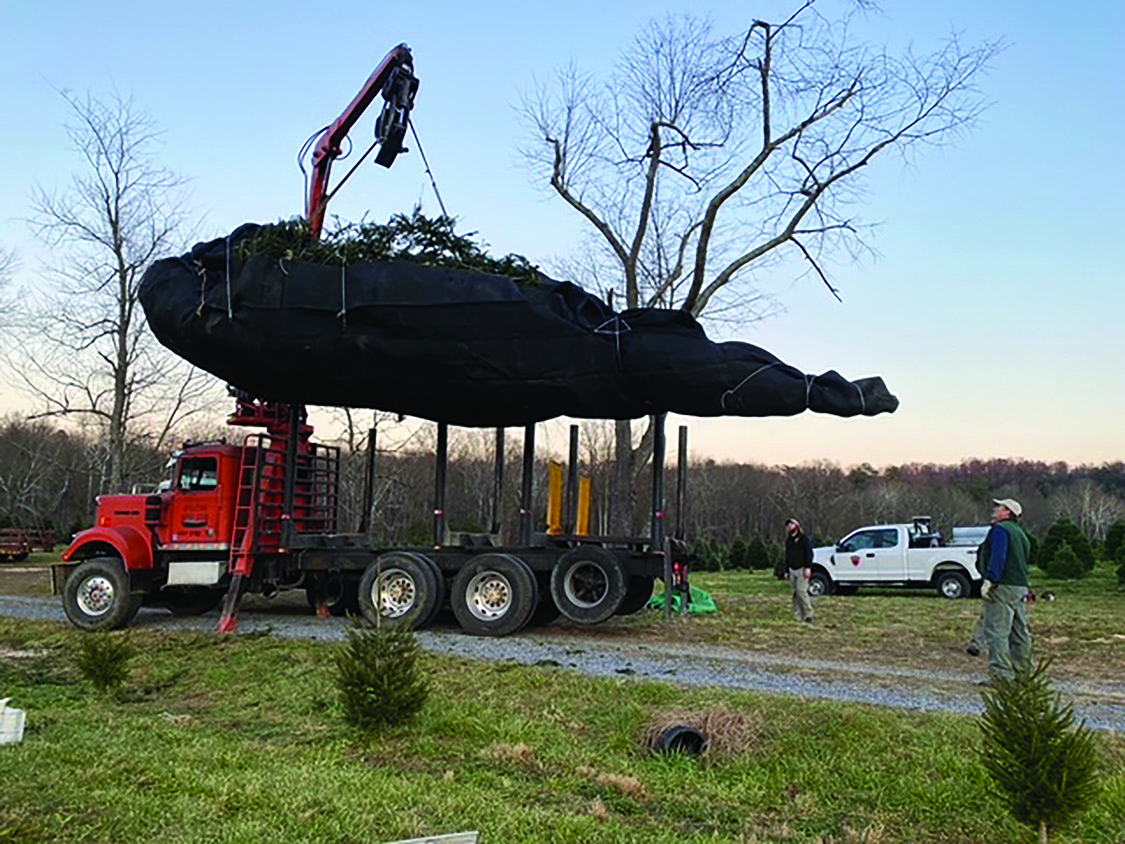 The Virginia Department of Forestry had eight people working to wrap the spruce tree and a lift to put it on the trailer to transport it to the Virginia Capitol. (Photo courtesy Ryan Clouse)

WINCHESTER, Va. — Seeing a Christmas tree grown on their farm shining on the lawn of the Virginia Capitol probably was not something Ron and Roberta Clouse dreamed of in 1977 when they helped a FFA member.
The Clouse family was in Richmond Dec. 1 as Gov. Ralph Northam and First Lady Pamela Northam lighted the 25-foot tall, 20-year-old Norway spruce on Capitol Hill. It was grown on their farm.
Ryan Clouse, the second generation to operate Clouse’s Pine Hill Tree Farm and president of the Virginia Christmas Tree Growers Association, said the Virginia Department of Forestry was instrumental in getting the big tree to Richmond.
That agency was actually there at the farm’s beginning. It gave the FFA member 100 seedlings to plant, Clouse reported. This was a part of a program across the state to create interest in forestry.
Clouse said his parents had the space on their farm where trees could grow so they let the student plant his trees.
Over the years as demand grew for real Christmas trees, the family expanded their no-animal agriculture to include Christmas trees. Today the farm grows trees on 20 acres of their 130-acre farm. These include Fraser, Douglas, Concolor and Canaan firs; Norway and blue spruce; and white and Scotch pine.
DOF cut the Norway spruce now standing on Capitol Hill. Clouse said the department had eight people working to wrap the tree and a lift to put it on the trailer to transport it.
Clouse credits two factors with helping increase the demand for real Christmas trees. The industry’s efforts to encourage people to keep it real with a live tree is one. COVID-19 is the other, especially for choose-and -cut farms such as his. People shut-in for so long found a way to get out in the open, experience the outdoors, breathe fresh air and take a bit of that home with them.
One of the attractions at the Clouse farm is a ride on a Reindeer Train.
One afternoon this fall, he said, nature provided a show of its own. A pair of bald eagles played above the trees, delighting the customers.
The farm provides saws and carts to those who want to cut their own trees and then does the shaking, baling and loading needed to send happy customers on their way.
In addition to the trees, the family farm sells wreaths, swags and tree stands.
Clouse who works for Farm Credit outlined some of the challenges of tree farming. This year there is a high demand for real trees and a short supply throughout the industry. He cited such factors as fewer trees having been planted recently and the difficulty of getting seedstock. Finding seedlings is almost as difficult as finding trees this year. Christmas tree growers often look to other growers for trees when they do not have enough to meet their orders.
The husbandry of tree growing is challenging as well, he indicated deer are his biggest challenge The cost of fencing to keep them out of the trees is prohibitive and there is not a lot of hunting pressure. Deer are not the only problem. He said the Mid-Atlantic offers multiple environmental issues. The high humidity of the region brings with it different challenges. Fungal problems and needle drop are among them. Japanese beetles are a foreign pest causing problems.
Clouse said Christmas tree growers are looking for better trees that grow quicker. He said that a lot of growers do not have the climate to grow Fraser firs, the tree that is in highest demand.
They are native to the high mountains in a small section of Southwest Virginia and Northwest North Carolina.