Pivot turns out to be fruitful for Pettyjohns 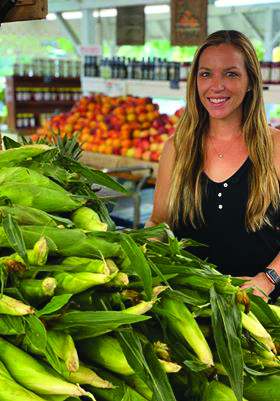 ABERDEEN — Marcus and Nora Pettyjohn had to do something.
COVID-19 had hit, businesses were suffering, some shutting doors permanently, and their own Samaha’s Farm market was temporarily shuttered.
Nora created a www.samahasfarm.com website where orders could be placed online, or customers could pull up anytime of the business day and order farm stand items a la carte. “We bag it up on the spot,” she explains, “we put it right in your trunk or your back seat — whatever works best for you. We also integrated a cashless, non-contact payment system that has been helpful to a lot of community members.”
From May 20 to June 20, that was the extent of the Samaha’s Farm business, and Nora’s dad, farm founder John Samaha, was against it. “He is a creature of habit, and he’s old school mentality which is amazing in so many ways,” says Nora. “But we needed some new age thinking and technology integration. We’re living in a digital world and a digital society, and we had to make a move in that direction to stay afloat.”
It proved fruitful (pun intended). “We started with one wagon and a very small display,” says Nora, “and every day we just troubleshooted: ‘OK, what did and didn’t work?’” A lot was positive, and soon a second wagon joined the first as more items were added, and a full-blown farm market drive-thru was running outside the original tent, and a receptive community was thankful.
Samaha started farming in 1958 at age 12 after answering a “Farm Hand: $1 Per Hour” ad, then started his own Samaha’s Farm five years later as a means to save for college. “What happened is he started his own wagon right here on Lloyd Road. He was naturally gifted at farming,” says his daughter. “And this was never dreamed of as being his career.” Samaha went to William Paterson College to study music, and, although offered a pilot’s job with Piedmont Airlines in the early 1970s, he eventually became a music teacher in the Hazlet school system for 37 years, while also running his farm. His modest teacher’s salary and three young daughters at home necessitated it.
Samaha never intended it (the farm) to continue, but it grew to 5 acres, 5 to 10 acres, and on and on. He retired from teaching in 2005, and he and his wife of 44 years, Yvonne, ran the farm until passing it on to Nora and Marcus in 2012.
Though he didn’t agree with the drive-thru concept, but he’s willing to look at results. “It’s been very busy,” he says. “We don’t know until the end of the season and the smoke clears how well it pays (dividends).”
When the walk-in market reopened on June 20, the initial intention was to cease drive-thru operations. The public, however, had other ideas, those reflected in the over 800 responses received in a Facebook survey. “Over 80 percent of the people,” says Nora, “wanted us to keep the drive-thru open.” Walk up is now 70 percent, drive-thru 30 percent.
Nora got more involved while in college at Richard J. Stockton College of New Jersey, where she is double majoring in Social Work and Elementary Education, and she now teaches 5th grade. She met Marcus when he was 21, she 19. He owned a successful landscaping business. “He married the farmer’s daughter,” Nora says, looking with a smile at her husband. “He started as an apprentice with my dad. In between his landscaping job, he would help him out here and there and would work for a couple of hours. Over time, the time on the farm got to be more and more and the time landscaping got to be less and less. We got to a point where we said, ‘OK, we have to choose.”
He chose farming. “I was used to the long hours; it wasn’t hard there,” her husband says. “There was a bit of a learning curve understanding the plants and the planting and all the operating of the farm. I learned it and now.”
“He’s a natural,” his wife says.
“I’m a natural,” he says, agreeing.
Samaha’s Farm, which farms in three spots (one in Colts Neck, and two in Holmdel) grows sweet corn, tomatoes, peppers, eggplant, zucchini, string beans, pumpkins, squashes, basil, and sunflowers. In addition to its own market, the farm supplies both retail and wholesale outlets.
Weather is now a challenge in the summer. “Excessive heat,” Marcus says. “And then we had one tropical storm, and then another tropical storm which came last week. The wind blew down all the corn in the field, broke some pepper plants, some eggplants – it did some damage. It’s been one thing after another.”
In second grade, Nora made a little decoration that says, “What do you want to be when you get older? A Teacher and a Farmer.” Now, here I am, teacher and farmer,” she says while laughing.
When asked how proud he is of his daughter and son-in-law, John Samaha says, “I have no words to describe that.” He then pauses, then says, “Marcus is a workaholic, and Nora is a genius.”