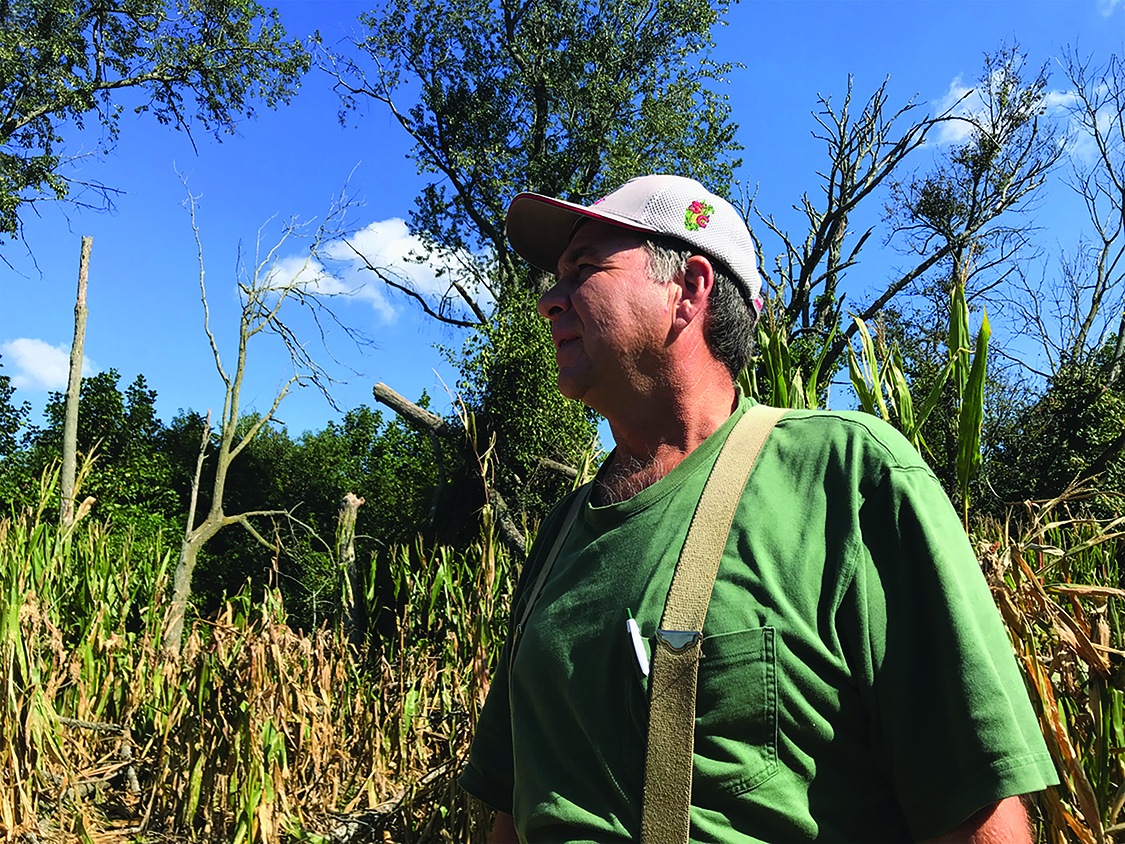 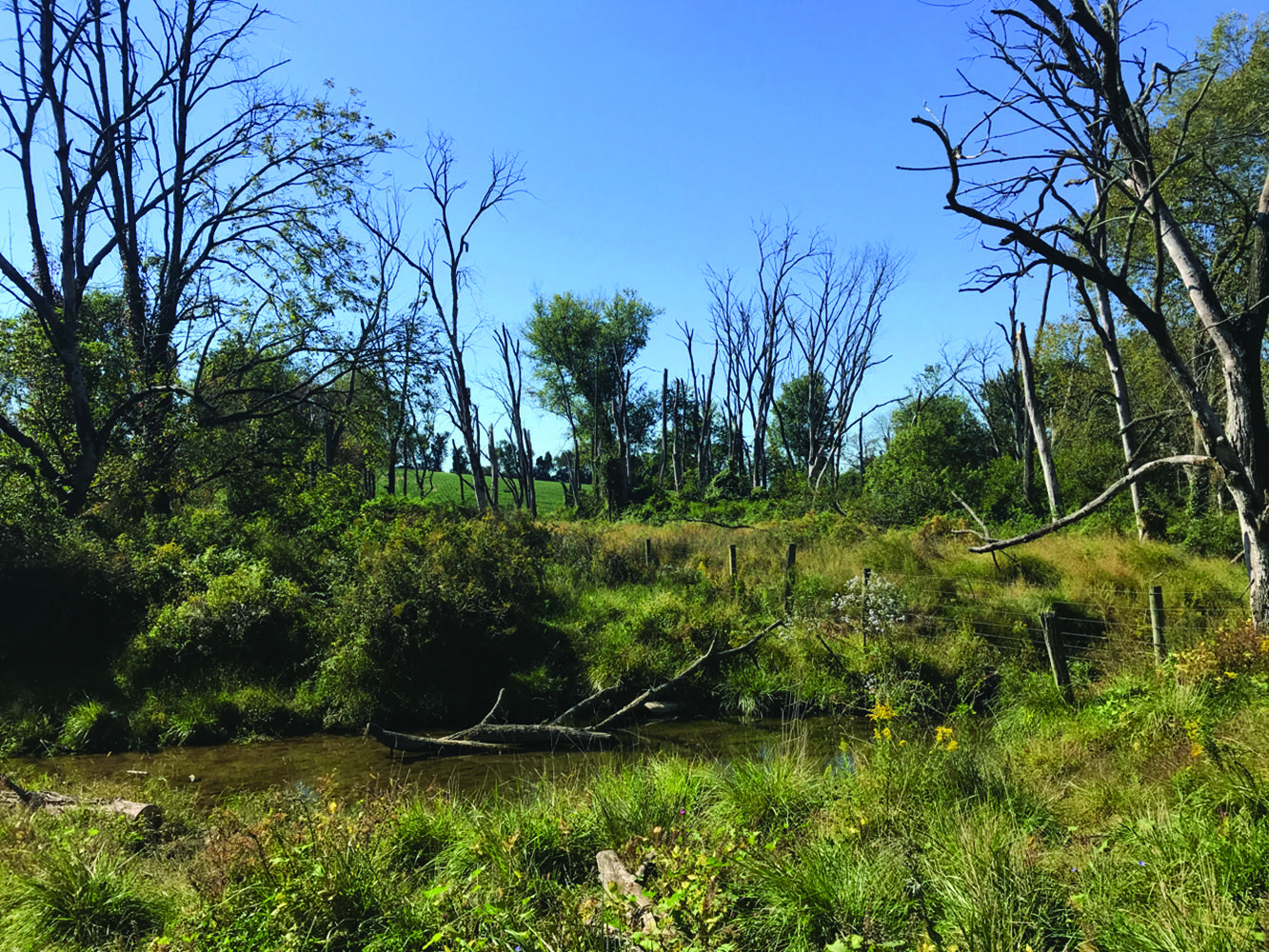 More dead ash trees line a stream at Limestone Valley Farm in Howard County, Md. When the trees, killed by the emerald ash borer, fall into the stream, they can drift during heavy rain into farm watergates or culverts and cause serious flooding. (Photos by Jonathan Cribbs)

CLARKSVILLE, Md. — On more than one occasion in recent years, the electric fence at Limestone Valley Farm has gone down, leaving its cattle free to roam — into the soybean or corn fields, or worse, into the bordering road where alarmed motorists have pulled over, tried to corral the animals and alert the farm.

“We’re lucky not one of them was in an accident,” said Michael Clark, one of the farm’s owners.

The culprit in those situations wasn’t a faulty fence or general wear and tear. It was the emerald ash borer, an invasive Asian beetle that has laid waste to millions of ash trees in the Midwest and along the East Coast since it was first detected in the Detroit area in 2002.

It’s also the current bane of Limestone Valley Farm, a well-historied grain and livestock operation in central Howard County. For several years, the ash borer has been infesting the farm’s many ash trees, and over a period of years, killing them. The end result: ash tree after ash tree dying, snapping and falling — onto the family farm’s gravel roadways, into its busy culverts and, from time to time, onto its high-tension electric fencing.

“It’s more than an annoyance. It’s taking a lot of our time trying to deal with it,” Clark said. “In farming, there’s always something new that you’ve got to deal with. The thing about this is it’s such a big scale.”

Clark and his brother, Rick Warfield, said they’ve cleared hundreds of fallen ash trees from their acreage at considerable cost over the last two or three years. It’s a common problem among farmers in the region who said they’ve been shocked at the time-sucking destruction the ash borer has inflicted since it arrived in Howard County about five years ago.

“It seems like there ain’t a week that goes by here that I’m not working on clearing up tree debris,” said Ricky Bauer, owner of Rural Rhythm Farm in nearby Dayton. “You could be sitting here right now and hear a crash. It’s a tree crashing. I’m surprised we haven’t lost a cow because of it.”

The beetle, which is thought to have arrived in the United States hidden in wood packing materials, has spread to 30 states, according to the USDA. Ash trees hosting the pest show symptoms including yellow, thin or wilted foliage; an unusual woodpecker presence and pecking holes; D-shaped beetle exit holes; and shoots growing from roots or a tree’s trunk, often with larger-than-normal leaves.

The ash borer was first discovered in Maryland in Prince George’s County in 2003. It spread across to western Maryland and in 2015 to the Eastern Shore. Maryland remains part of a federal ash borer quarantine, which restricts the movement of ash products to only quarantined states. (Most of the quarantine stretches as far south as North Carolina, as far north as New York and as far west as Iowa.) The tree is one of the nation’s most common landscaping trees, and they’re particularly common in Western Maryland forests.

Managing the pest has been a relentless task for local arborists and tree managers, said Chris Leatz, an operations supervisor with Howard County’s Bureau of Highways. He’s spent more than four decades in tree management and monitors trees along county roads.

“It’s the worst forest pest to ever hit North America,” he said.

His department was proactive, however, and began preemptively removing ash trees and treating others in 2012, he said. It hired professionals to treat nearly 4,000 ash trees. They can be injected with insecticides that discourage the ash borer from laying eggs in the trees. The county has also removed more than 3,600 ash trees either preemptively or after infestation.

“It’s just never-ending,” he said. “I wish I never heard of the emerald ash borer.”

But a comprehensive treatment plan like the county’s would probably be too costly for any single farm, he said. Ian Carroll, owner of Vineyard Farms in Ellicott City, first learned about the ash borer from a Baltimore Gas & Electric arborist inspecting trees near his property. He was told the ash borer had infested some of his trees, which were dying.

“I said, ‘I’ll worry about it when it happens,’” he said. “And it happened. A year later the trees were dead.”

His 450-acre farm produces grain and hay, and it maintains a horse boarding operation. The farm also includes pathways and trails for the horses, and the ash borer has become a menace, frequently killing trees that fall onto those paths. He’s removed — or needs to remove — at least 20 of them. He knows other farmers bedeviled by the pest as well. A neighboring farmer, for instance, has spent roughly $80,000 to remove 75 dead trees from his farm, he said.

Fortunately, Carroll has an all-terrain forklift that allows him to hoist the trunks onto a trailer so he can move them to a nearby friend who processes them into firewood. There hasn’t been a significant financial cost yet, but Carroll is a full-time social worker. Farm work is generally relegated to the weekend.

“There’s only so many hours in the day,” he said. “(Dead ash trees have) been taking up my weekends for the better part of 2021.”

Looking back, he wishes he took the BG&E arborist more seriously. He could have preemptively removed ash trees on his own timetable.

“I was just not mentally prepared,” he said. “I’m playing catch-up now. If I’d been more foresighted I wouldn’t be in the situation I’m in.”

The University of Maryland Extension advises landowners to treat the ash trees if necessary, but only after flowering, to protect pollinators. It provides information for such treatment on its website. Large trees will likely need to be treated by a professional arborist, and the Extension discourages landowners from cutting down dying trees. By that point, they can be brittle, unpredictable and dangerous, and should be managed by a professional arborist or tree service.

As the beetle continues to infest forestland, the cost in Maryland could be significant. There are more than 6 million ash trees in just the Baltimore area, according to the Maryland Department of Agriculture. Projected losses from the deaths of those trees could exceed $228 million in that area alone. Nationally, if the beetle was allowed to travel unchecked in the lower 48 states, it could cause between $20 billion and $60 billion in losses to the forest products industry, the USDA said.

Clark and Warfield wondered aloud last week whether farmers should be compensated for costs incurred while constantly removing the downed trees. After all, farmers had nothing to do with the insect’s nationwide spread, but they’re stuck with the consequences, Warfield said. They fall in corn fields and interrupt the fall harvest. They fall into streams and drift into the farm’s watergates or into a culvert, leading to backups and flooding.

“Ideally we’d go down there, push them all up (onto a field) and burn them, but they don’t allow you to burn anything anymore,” Warfield said.

For now, Clark said they’re simply waiting for the ash borer to consume all the ash trees on their property. Then they’ll be done, he said — until the next pest attacks a different species.

“It’s the way things are,” Clark said. “We’re just trying to deal with it the best we can.”