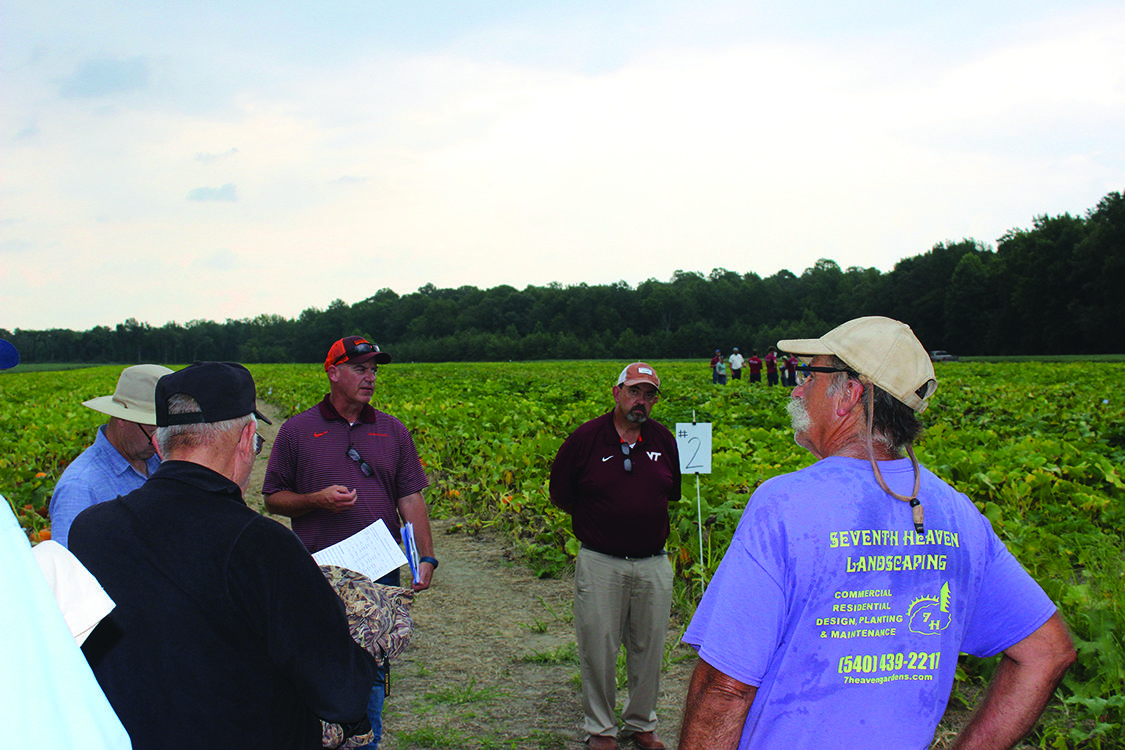 LENEXA, Va. — David Langston, Virginia Tech Extension plant pathologist, is accustomed to having pictures of crop diseases a farmer can’t identify pop up on his phone.
This year, a lot of photos coming from pumpkin growers are of plectosporium blight, a fungal disease in cucurbits that can cause major yield loss if left uncontrolled.
It can mar mature fruit with pimple-like flecks as well as damage pumpkin stems, which are crucial for marketability.
“We get a lot of calls about it,” Langston said during Harris Seeds’ Great Pumpkin Extravaganza field day hosted by Davis Produce. “I get people telling me it’s more of a problem. It’s becoming more of a typical pumpkins disease.”
Plectosporium has been in the United States for more than 40 years. It prefers warm, humid or rainy weather conditions and it overwinters on crop residue and can persist in the soil for several years.
In a Sept. 15 crop disease bulletin, Gerald Brust, University of Maryland Extension senior agent and vegetable specialist, noted seeing more pumpkin fields with plectosporium blight and described its effect on the crop.
“Plectosporium blight can be recognized from the small white to light tan spots on leaves and elongated lesions on stems and leaf petioles,” Brust wrote. “On green fruit the lesions are very small white to tan flecks on more mature fruit the lesions are round to irregular shaped pimples on the surface of the pumpkin that often makes them unmarketable. These fruit lesions also allow soft rot pathogens to penetrate into the pumpkin that will cause the fruit to ‘melt-down’ into a deflated mess.”
Funcides are effective in controlling plectosporium, if it can be identified soon enough.
Langston said rotating multiple fungicides that have efficacy on plectosporium and other common diseases is something he recommends to growers.
“It’s more of a systems approach,” he said. “If one fails, another might pick up.”
In his bulletin, Brust said when plectosporium blight occurs to rotate away from fields planted to summer squash and pumpkins for two years.
Langston said its occurrence is harder to predict than diseases like downy mildew and powdery mildew which growers expect to contend with annually and have factored into their spray programs.
The mildews’ continual presence has also garnered more research in developing reliable control measures than diseases like plectosporium that aren’t as historically typical.
Langston said he has studied the disease in different crops for much of his career and he and Steve Rideout, Extension Specialist for plant pathology, have put more focus on plectosporium in their fungicide trials since 2016, but to make better headway, a multi-year trial soley dedicated to studying the disease would increase its predictability.
“You go where there’re questions and right now you don’t have a lot of questions on downy mildew and powdery mildew. We’re getting a lot of questions on plectosporium.”