Potatoes an underrated product throughout Delmarva 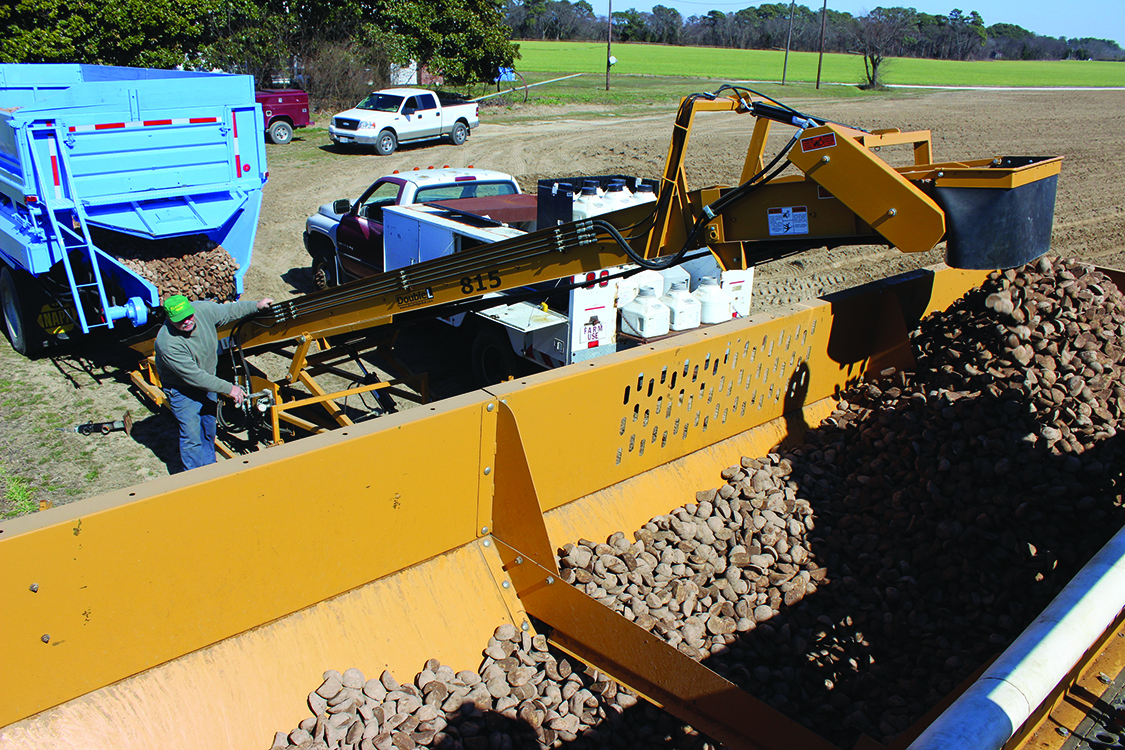 Idaho and Maine are well known as producers of potatoes, but the Delmarva also has a number of farms producing the spuds that Americans love.
Potatoes here are harvested for both use as baked potatoes and French fries as well as for transformation into potato chips. Virginia is prime territory for potatoes.
“While farmers grow potatoes in other parts of the state, Virginia potatoes are primarily grown in the two counties that comprise Virginia’s Eastern Shore: Northampton and Accomack counties,” said Michael Wallace, Director of Communications at the Virginia Department of Agriculture and Consumer Services. “Virginia potatoes are planted between February 20 and March 20 and harvested from June 15 to Aug. 10.
Virginia farmers plant roughly 4,000 acres of potatoes each year. About 60 percent of those acres are considered chip-stock potatoes, which means they are used to make potato chips.
There are several varieties of chip-stock potatoes grown in Virginia, but the ‘Atlantic’ variety is the primary variety grown. Chip-stock potatoes are grown in Virginia and mostly go to Pennsylvania, while some go to small chip companies in nearby states.
The heat during potato harvest makes it almost impossible to store the potatoes, so chip-stock potatoes are harvested, loaded onto semi-trucks, delivered to the chip company, and immediately made into potato chips, all within 24 hours of being harvested.”
Wallace stated that the other approximately 40% are “table-stock” potatoes used for food service or sold retail in grocery stores.
“Most of Virginia’s table-stock potatoes are considered round Irish potatoes (reds, whites and yellows) but there are some Russet potatoes grown as well. Several varieties of each color potatoes are grown in Virginia but some of the most prominent are Envol, which is a white potato, Red Norland, which is a red skin potato, and Columba and Actrice are two popular yellow varieties. Heat is a major issue for table-stock potatoes as well,” Wallace said. “Since these potatoes are not being processed and will need to be stored for a short amount of time, most Virginia potato farmers have ‘coolers’ that can hold several trailer loads of packaged potatoes.
“The potatoes will stay in these rooms for 18-24 hours in order to bring the pulp temperature of the potatoes down to 55-60 degrees before being shipped to their destination. Virginia table-stock potatoes are sold along the eastern seaboard, from Miami to Toronto. Most farmers sell a majority of their potatoes to companies that are known as ‘repackers.’ These companies have contracts with large grocery store chains and need a steady supply of potatoes in order to fill their contracts. A small handful of potato farmers package their potatoes for local retail.”
One of those local farms growing the spuds is Dublin Farms in Horntown, Va., in Accomack County. Potatoes from Dublin Farms are sold directly under its name as well as repackaged by several repackers for sale in grocery stores in the region and beyond.
Phil Hickman and his brother, David, have operated Dublin Farms since 1974; Phil is 69 years old; David is 67 years old.
“Potatoes have been grown on various parts of this farm every year since 1876,” said Phil Hickman. “Dublin Farms is one of the farms recognized by the Commonwealth of Virginia as a Century Farm.”
Much of the potato harvesting and packaging operations are done within a six week time period. “Harvesting usually starts during the last week of June,” said Phil Hickman. “Our goal is to have the harvest completed by the beginning of August.”
He noted that Dublin Farms produces about 400 tractor trailer loads of potatoes annually. Each trailer load carries about 50,000 pounds of the spuds.
As past chairman, Phil Hickman helped lead Potatoes USA, a “marketing organization for the 2,000 potato farming families operating in the United States,” according to a statement from the organization.
He noted how regulations have changed through the years. “Food safety is critical for us,” he stated. “Regulations have become more intense and more expensive. We’re able to track every package of potatoes from the field where they were harvested.”
In Maryland, the 2017 Census of Agriculture from the USDA reported that there were 216 farms producing potatoes in that state in 2017, and 260 farms with this crop in the state in 2012.
Acres of harvested potatoes grew about 10 percent between those years: 2,561 harvested acres in 2017; 2,266 acres with potatoes harvested in 2012 in Maryland.
In 2017, among the counties with the largest number of harvested acres of potatoes was Caroline County. In 2017, 585 acres of potatoes were harvested in that Delmarva county.
In Delaware, the 2017 Census of Agriculture issued by the USDA detailed that farms harvesting potatoes included 23 farms in 2012, and 25 farms in 2017. Acres of potatoes harvested decreased from 1,363 acres in 2012 to 1,131 acres in 2017. About 90 percent of those acres were in Kent County, Delaware, in 2017.