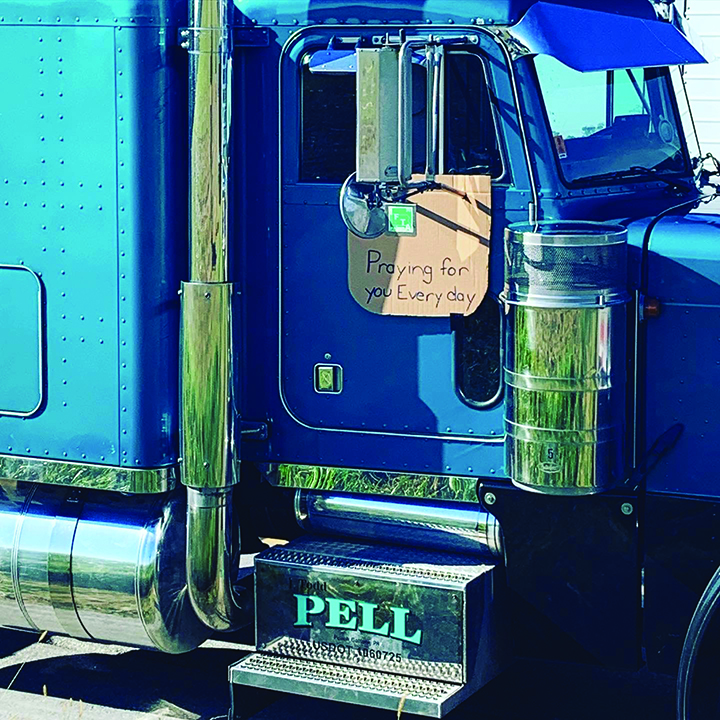 Hundreds of trucks, tractors and other vehicles lined Union School Road and Jackson School Road in Oxford, Pa., during an Oct. 18 “Prayer Ride” for Hostetter Grain merchandiser Barry Hostetter. Many of the vehicles donned signs and banners with well wishes for Hostetter during the 75-minute ride. (Photo courtesy Amanda Miller)

OXFORD, Pa. — On Monday, Oct. 12, farmers Darryl King, Phil Martin and local youth center leader Buzz Tyson started talking about a way to show support from the community to Barry Hostetter, a grain merchandizer for Hostetter Grain who has been battling cancer.
Six days later, 259 truck tractors, farm tractors and other vehicles had mobilized on the roads around Hostetter Grain’s Oxford, Pa., elevator and Hostetter’s home for a massive Prayer Ride — “a church service without going to church,” Martin said. “It was set up to show Barry and the Hostetter family great support from the agriculture community.”
The local fire department and state police helped with road closures and detouring traffic and in the late morning sunshine on Sunday, Oct. 18, the convoy progressed past Hostetter’s home for about 75 minutes.
Many of the vehicles donned signs and banners with well wishes for Hostetter.
“The response that we got was amazing,” Martin said. “The Hostetter family was beyond shocked.”
Martin said along with the large turnout of farmers from Maryland, Delaware, New Jersey as well as Pennsylvania, he was overwhelmed by the amount of calls he got after the ride from participants who expressed what it meant to them.
“We reached out to a lot of people by doing this,” Martin said. “We did it just to raise everybody up.”