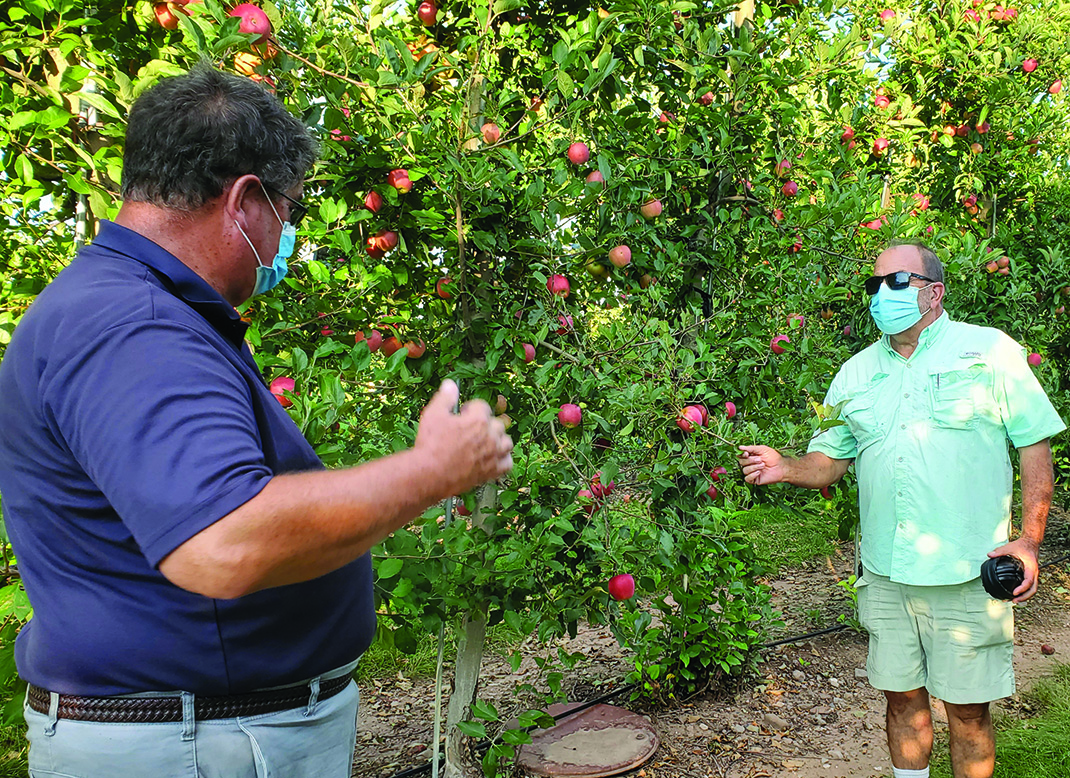 BIGLERVILLE, Pa. — As harvest time for apples begins, maximizing red color in red blush apple crops contributes significantly to maximizing growers’ financial rewards.
Formed by anthocyanins in an apple’s skin and governed by “cool nights and warm sunny days” in the days preceding harvest, “a red fruit color is a very important aspect to growers,” particularly in the arena of consumer preference, said Dr. Jim Schupp, professor of pomology at Penn State’s Fruit Research and Extension Center.
“Both sunlight and cool nighttime temperatures are equally important [to anthocyanin development],” Schupp said, “but, because we can’t build a cool box around the orchard to counteract warmer autumn temperatures, sunlight is something we can work with.”
To that end, Schupp, along with Dr. Daniel Weber, PSU’s Tree Fruit Extension educator in Adams County, have been running trials of the REDpulse Pneumatic Defoliator, generously lent by Provide Agro Corporation, a distributor of agricultural equipment in Canada and the eastern United States.
Developed by Fruit-Tec, a German manufacturer of specialized agricultural equipment, the REDpulse is the company’s latest innovation in its efforts to both reduce chemical usage in orchards and provide answers to the worldwide labor shortage in agriculture.
“Since it’s new to us,” said Chris Bartlett, Provide Agro’s sales representative for the Mid-Atlantic region of the United States “and we have a good relationship with Jim Schupp and Penn State Extension, we decided we would get one down there for them to play with.”
The REDpulse has two fully enclosed front-mounted rotors, which each have two air hole outlets.
As described in the various literature, the REDpulse, which requires an 80 to 85 hp preferably closed cab tractor to operate, uses pulses of high pressure air “to blast away leaves and parts of leaves, exposing the fruit to more direct sunlight, thus increasing the potential for increased red color and reducing the number of pickings.”
Bartlett also noted an additional possible benefit of mechanical defoliation during a discussion of post-harvest storage issues: “Getting rid of leaves and debris allows for more airflow around the fruit and could reduce humidity and fungal infections at harvest, which then helps the fruit’s overall storage-ability.”
Right now, however, said Bartlett, “the largest variable is timing the defoliator’s use,” an issue being preliminarily explored in the PSU Extension trials.
For instance, “for most varieties, you’ll typically do the defoliation 7 to 9 days before harvest,” explained Bartlett. Indeed, he continued, in studies conducted by Hochschule Geisenheim University on the REDpulse’s performance in German orchards of SweeTango, “they found that going too early was knocking apples off trees.”
According to Schupp, PSU Extension is running the defoliator at one and two week intervals on standard vertical axis stands of Buckeye Galas and Honey Crisp.
“We’ll sample the trees and then pick the whole plot,” said Schupp, “We hope to get some good preliminary results to know whether it should be more fully funded.”
Besides timing trials, Weber noted that they would be doing a Golden Delicious trial in September to rate any bruising on the fruit from the debris expelled during the defoliation process. “We chose Golden Delicious because on greener apples, the bruising will be easier to see and rate,” Weber said.
“Growers are intensely interested” in what the REDpulse can do in improving the quality of their apple harvests, said Schupp, as evidenced by the 20-some growers who turned out for the three demonstration sessions. “They want to grow fruit that satisfies and delights people’s senses.”