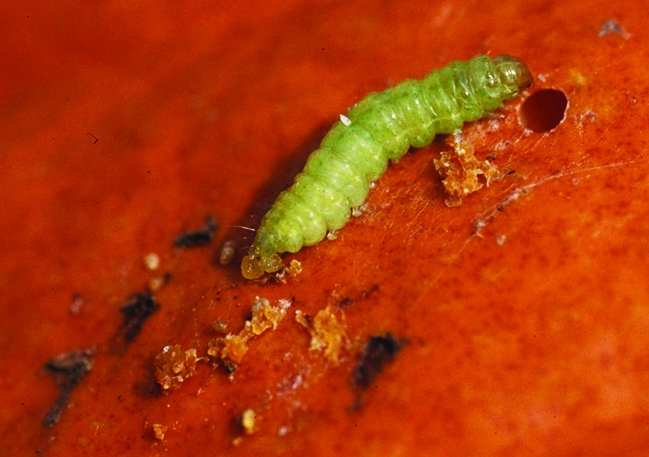 Pickleworm larvae feed on flowers and bore into fruit leaving a characteristic perfectly round hole often with sawdust-like fecal material around it as well. (Photo courtesy Virginia Tech)

WHITETHORN, Va. — Virginia and Mid-Atlantic pumpkin growers are being warned of the presence of pickleworms damaging this year’s crop.
The tropical insects are moving into the region via the summer storms moving from southern states, experts report.
Dr. Tom Kuhar, professor of vegetable entomology at Virginia Tech said that his graduate student, Sean Boyle, has found the insect on zucchini and squash at the Virginia Tech Kentland Farm this year.
“This is the first time we have seen this pest in 2020,” Kuhar reported in an alert to leader in the pumpkin industry across the state. “If you have noticed this pest on your area, please let me know at tkuhar@vt.edu.”
While this is the first time the scientists have seen the pickleworm on the cucurbits in their own gardens, it is not the first time Virginians have experienced it.
Kuhar noted that several Virginia pumpkin producers have experienced damage by the pickleworm since 2017. This has usually followed summer storms in August.
“There is not much market for pumpkins damaged by the worms,” Dann Brann of Brann and King Farms in Riner, Va. said. His farm is a major supplier for Wal-Mart stores in Southwest Virginia. “It is really tough to grow a good crop of pretty pumpkins and have them refused because of pencil size holes caused by rine worms. It is tremendously important that we have an entomologist such as Dr. Tom Kuhar at damage.
“If you see the damage, it is too late,” Brann said.
According to Kuhar, the pickleworm develops in 30 days and has multiple generations per year.
Its deposits of tiny eggs are hard to see.
Adding to difficulty in monitoring the pest is the habit of the adult only flying at night.
Another hinderance is that this moth is not attracted to light.
Moths fly to flowering pumpkins, squash, or cucumbers and deposit their eggs.
A single female moth can lay up to 400 eggs usually on cucurbit flowers.
Larvae feed on flowers and bore into fruit leaving a characteristic perfectly round hole often with sawdust-like fecal material around it as well.
Kuhar said that pyrethroid insecticides are relatively low cost and effective at controlling pickleworms as well as other pests like squash bug and cucumber beetle, but they are not IPM compatible and can result in outbreaks of secondary pests such as aphids.
“Usually two or more sprays of pyrethroids in late summer can cause severe aphid problems leading to honey dew buildup on plants,” Kuhar reported. “Other insecticides that control pickleworms include the spinosyn products, Radiant and Entrust; the diamide insecticides, Coragen and Harvanta; the insect growth regulator (IGR), Intrepid; and the lepidoteran targeting insecide Avant eVo.”