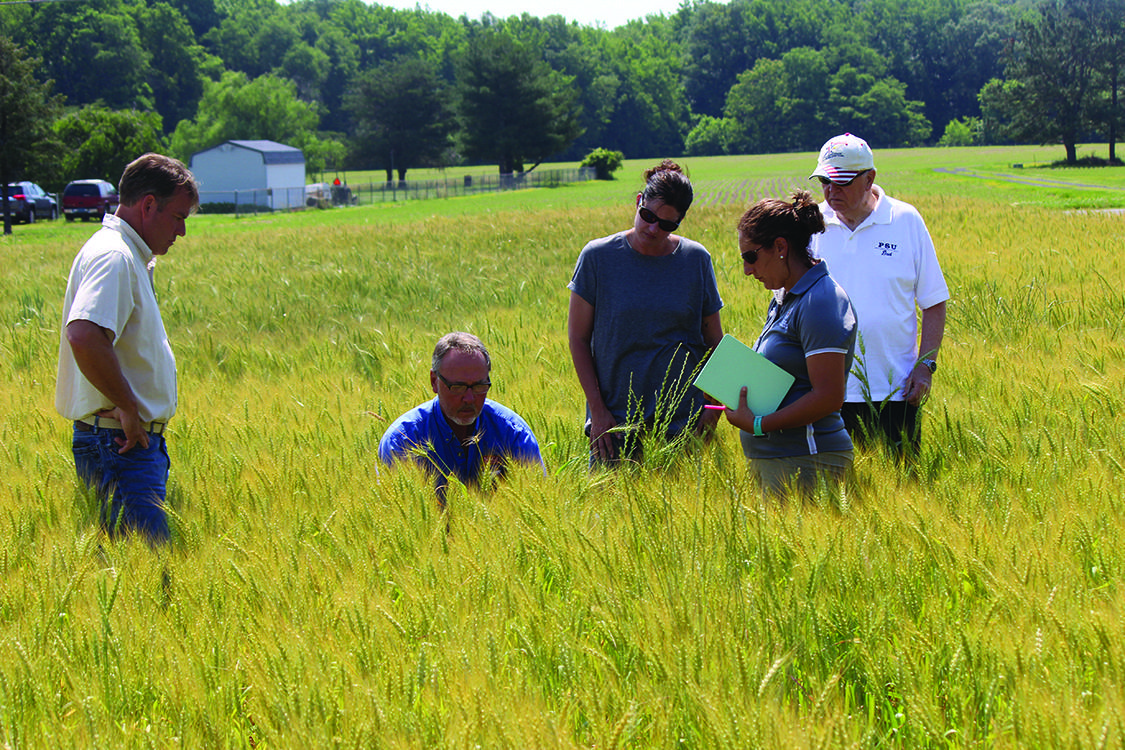 At the outset of this year’s Delmarva wheat crop tour, Lee Sproull, director of grain marketing for Mountaire Farms and one of the tour’s organizers, told the small group about to visit a handful of fields in Delaware and Maryland that it was likely going to be a boring day.
“But that’s good,” he added quickly, noting timely weather during the later growth stages has kept pest and disease damage way down.
In field after field from Milton, Del., to Sudlersville, Md., wheat quality was high, forcing tour participants to hunt for disease and insect damage.
“There really wasn’t much to see, which is good for the farmers,” said Deanna Irwin, grain merchandiser for The DeLong Company, who traveled from New York for the tour.
Irwin said wheat can be the most temperamental crop in the commodities market so having an idea of what the quality and yield will be from states she buys from can better inform her strategy.
The good quality in the fields became somewhat of a challenge to the small group to find a problem, however small.
“Dale’s going to walk until he finds something,” Mark Sultenfuss, crop insurance agent and agronomist at Nagel Farm Service and a tour organizer, said of Dale Morris of Eddie Mercer Agri-Services and former Maryland Department of Agriculture turf and seed program manager.
Sultenfuss was right. Eventually, Morris found something the group could gather around and discuss for a few minutes, but at no stops were the issues significant enough to impact yield.
Each field they visited had at least one application of fungicide at flowering and half of the fields had an additional application at the flag leaf stage.
The Delmarva tour was indicative of similar tours held throughout the Mid-Atlantic region.
“In general, each group had the same result,” Sproull said in an e-mail after tour groups gathered for a dinner hosted by the Southeastern Pennsylvania Agribusiness Association. “Apparently, the dry conditions in May did not promote the growth of diseases such as Fusarium which as we know creates vomitoxin (DON). DON can affect baking quality and flavors in food. This is exactly why producers, buyers, elevator managers and millers are so interested in the regional results.”
Participants on an earlier Virginia wheat tour determined the wheat yield potential in the Middle Peninsula is estimated at 80 bushels per acre this season, said Josey Moore, VFBF commodity specialist.
Virginia Farm Bureau Federation partnered with Virginia Cooperative Extension to host two wheat tours on 12 farms on the Northern Neck and Middle Peninsula.
“We had a lot of really good fields, ,and some were affected by the dryness, so the quality fluctuated,” she said. “But because it has been so dry, we haven’t had to worry about pests as much.”
The results are encouraging for wheat farmers who in recent past years have dealt with quality issues from disease spurred by wet weather at the crop’s flowering stage that ultimately caused price dockages at elevators who had to blend wheats from different areas in order to meet end-user specifications.
But for as dry as it was in May, tour participants were reminded of wet conditions in the fall that forced some growers to park their seed drill in favor of broadcasting seed on the field or plant less than their intended acres.
“This was a tough fall to be planting wheat,” Morris said. “I don’t think there was a day when there was dust behind the grain drill.”
Dr. Nicole Fiorellino, University of Maryland Extension agronomist, who was on the Delmarva tour said it needs to stay relatively dry in the next few weeks to preserve grain quality. A rash of wet weather leading up to harvest could cause the crop to lose test weight or even sprout in the field.
“It’s unfortunate that a grower can have a great season and produce quality wheat and precipitation just prior to harvest (a factor out of the farmer’s control) can have a major impact on his yield and quality,” Fiorellino said.
Tour particpants added a big part of having the tours is fellowship and seeing the people they normally only talk with on the phone.
Sproull said the dinner in 2019 brought in 70 people from several states and after the COVID-19 pandemic canceled it last year, 43 people came this year.
“Considering we were unable to have the consolidated regional wheat tour meeting last year due to COVID, we had an exceptional rebound,” he said.