June 30 turned out to be a big day for reports. USDA released its Quarterly Grain Stocks report, its Acreage update, and the National Weather Service/NOAA updated its forecast for July.
The Quarterly Grain stocks report is the count of old crop left over after three quarters of use as of June 1.
Note, “grain stocks” are different than “ending stocks.”
For corn this report is relatively important as it fills in the blanks for feed, residual and miscellaneous demand for the past three months. 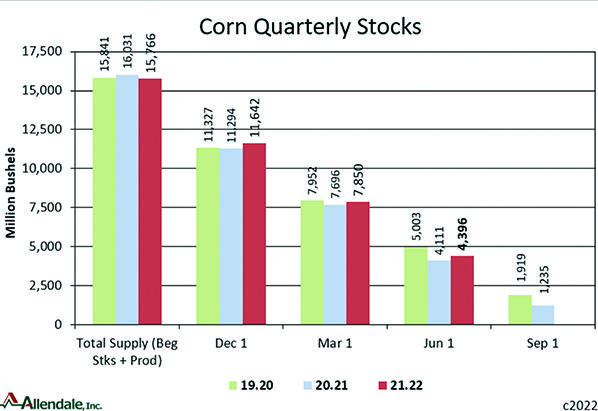 Note that the next three months — June, July and August — will complete the old crop year for corn and beans.
That said, ending grain stocks at the end of the year become ending inventory carried forward onto the new balance sheet.
Ending stock are a primary driver for price. When stocks increase, price tends to decrease.
The chart at the top shows ending stocks after three quarters, for the last two years — plus Allendale’s prediction for this report.
The USDA’s actual quarterly corn stocks volume released June 30 was 4.35 billion bushels — up 6 percent from June 30, 2021.
A 6-percent increase in corn stocks could be expected with the current decrease in ethanol usage and a decrease in exports. Bearish corn.
Historical soybean stocks plus Allendale’s projection for this year are shown in chart at the middle.
USDA Soybean stocks volume released June 30 showed 971 million bushels was up 26 percent from June 1, 2021.
The increase reflects the slow export of soybeans.
The third chart shows historical levels for wheat, plus Allendale’s projection for this year.
USDA old crop wheat stocks volume released June 30 was 660 million bushels, down 22 percent from June 1, 2021.
This report represents the year end report for old crop wheat. This balance will be carried forward to the new crop. 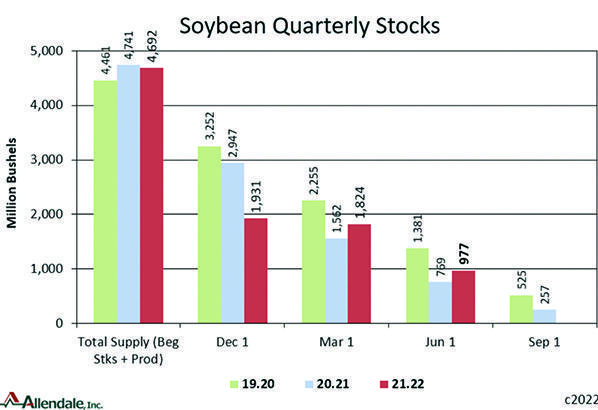 This is bullish, but we must remember export sales are essential.
The acreage report represents the second large farmer survey of the year.
This is a survey of producers taken in the first two weeks of June for acreage as of June 1.
The terminology for their questionnaire is to list acres “planted and to be planted” as of June 1. This is still more or less an “intended” planting survey.
The fourth chart shows 2021 acreage, planting intentions projected back in March, plus the June 30 data.
Note that USDA predicted a swing of 4 million areas from corn to beans in March.
This big swing was due in part to the huge increase in corn input prices: fertilizer and fuel.
What they did not anticipate at that time was the shortage of glufosinate products for beans.
To give you a heads up, this shortage may continue into next year.
In an article in Successful Farming entitled: “‘Off The Charts’ Chemical Shortages Hit” By Tom Polansek, on June 27 in Reuters, it was written: “More difficulties are on the horizon, as BASF, which formulates glufosinate, told Reuters the supply situation will not improve significantly next year.”
“It’s going to take more time than what our customers, farmers and retailers would have thought,” said Scott Kay, vice president of U.S. crops for BASF.
July weather will be key to the corn crop. 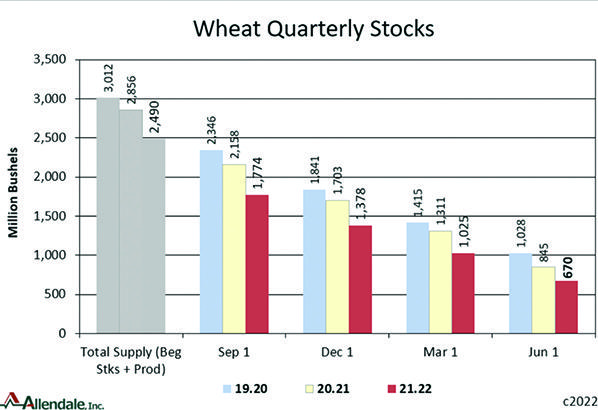 Favorable moisture and temperature during the reproductive stages of tasseling and ear fill are essential to yield.
Every third Thursday of each month the National Weather Service/NOAA updates both the one-month out forecast as well as each of their rolling three month forecasts.
Early reports suggested the forecast was improving for the western Corn Belt.
Unfortunately, the update for July was not available by deadline for this writing.
The crop process report, on Page 6 released on June 27 showed the current crop is doing well.
The current corn crop is right at the five-year average of 67 percent in the good to excellent category, beans are 1 percent over the five-year average at 65 percent, and spring wheat is also listed at the five-year average of 59 percent in the good to excellent category.
Last week I touched upon corn usage and shared that ethanol production was down which was driven by falling gasoline usage.
Last week the U.S. Energy Information Association, EIA, reported that gasoline usage was minus-6 percent from the last normal driving year in 2019.
The week before it was down minus-14 percent.
It will be interesting to watch usage over the July 4 holiday. Ethanol usage mirrors gasoline usage.
The price at the pump coupled with the push for electric cars does not support ethanol.
(Note: I research material from Allendale, DTN, USDA, University Land Grants and other credible sources in compiling this article. It is not merely my opinion, but rather a consensus of experts in the trade. Looking for a marketing coach or someone to discuss strategies with? Contact me at jehgrain@gmail.com, or call 410-708-8781.)