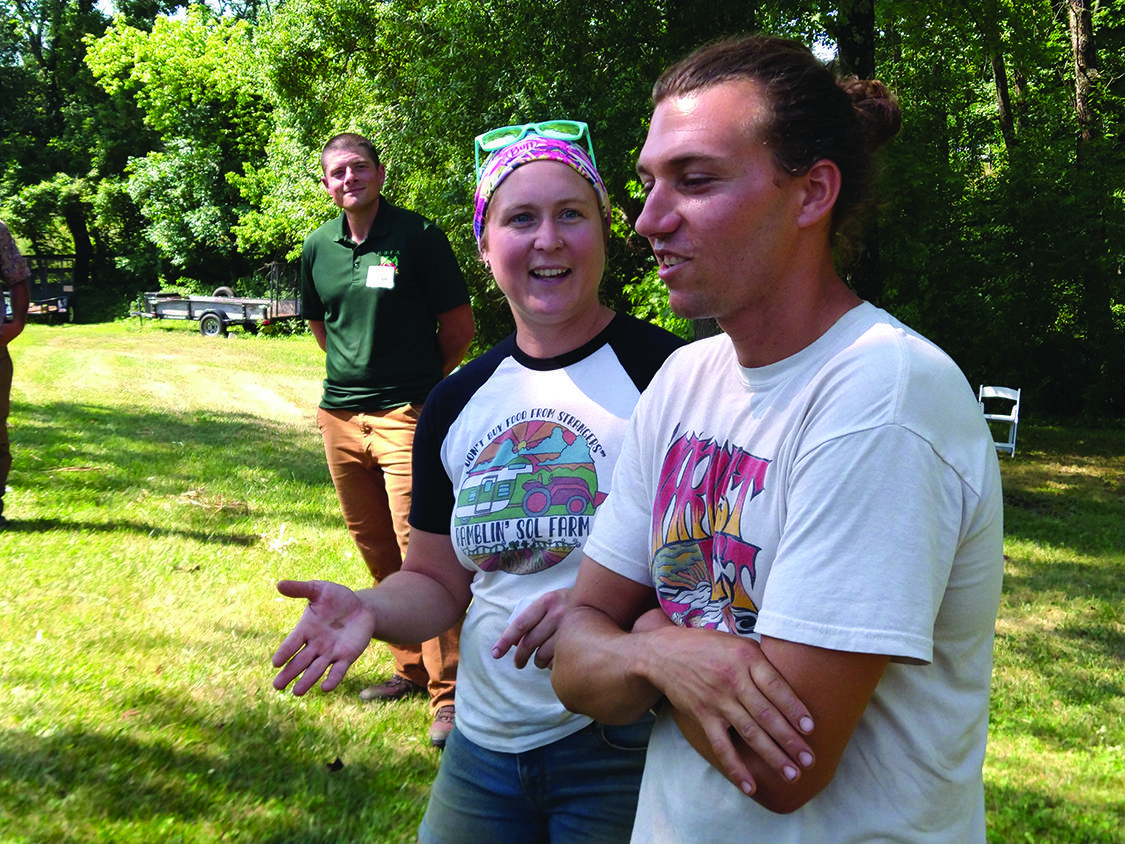 CREAM RIDGE — Ramblin’ Sol Farm has only been operating at its current location for two years, but its owners have worked to give the farm deep roots in the community.
Owners Hannah Conner and Joe Soto shared their farming story with the crowd gathered for a Farm Bill field day at Ramblin’ Sol Farm. The Northeast Organic Farmers Association’s New Jersey Chapter organized the July 20 event, in conjunction with USDA staff.
Conner said the 8-acre farm was previously a horse operation with plenty of manure mixed into the soil over the years which has benefited the natural fertility of the growing fields. They use several hoop houses to grow much of their produce guarding against sudden extreme weather events. The couple added they have a young child and a lease-to-own relationship with a supportive former horse farm owner.
The couple has a lot of combined years of experience working on different farms and landscaping jobs. Aside from what they sell through their CSA program, they are vendors at the Brick Farmers Market each week.
“It is by far the best we’ve found in terms of drawing a really nice crowd. It’s more than 2,000 people that come through most days. They do a really nice job and they encourage vendors who encourage people to hang around and ask questions, so they make it really easy and efficient for us,” Conner said.
They employs a part-time person who accompanies them to the market and a retired woman from the area works two days a week to wash and sort produce for the Brick Farmers’ Market.
“Because we’ve both worked on a lot of CSA farms, we get a lot of comments and questions from people who are not sure how to use or cook certain vegetables, so with our online presence, we made it easy for customers; they can choose from three different CSA programs,” Conner said.
They also host potluck dinners and other events to get people to the farm and build community relations and awareness. Their cook, Tamara, recently conducted an educational seminar on how to make fresh pesto from scratch in the farm’s kitchen and sorting area.
Devin Cornia, executive director of NOFA-NJ, pointed out that so many people, post-pandemic, are yearning for a sense of community and collaborating. Conner and Soto agreed.
“Our mentality came from having nothing in the beginning. People thought we were crazy,” Conner said. “There was a lot of resistance when we were applying for loans. What is a CSA? Do you have a written contract? All of this. There was a lot of resistance, so we had to find people in the community and educate them about what we were doing, find people in the community that understood what we were doing and wanted to support local farmers and local produce. It’s wonderful that the community members are out here and support our CSA program.”
Soto said by working in partnership with a nearby organic farm in Allentown, they do egg shares as part of their CSA program as well. They added their neighbor, Cream Ridge Winery, has been extremely supportive of their efforts, so Ramblin’ Sol hosts an annual dinner there in September.
“They definitely didn’t think we were crazy,” Conner said of the Cream Ridge Winery owners. Initially, we didn’t want to have the CSA pick-up at the farm, so we had it at Cream Ridge Winery. That was just awesome.”
Ramblin’ Sol Farm now has close to 200 members in its CSA program, so Conner has to spend more time in the office, at the computer, than she would like to.
“We started using Google forms and people would fill out their orders that way; it would create the spreadsheet and then I would create a pivot table that would generate a harvest plan, based on the orders we had,” Conner said. “It’s a really simple way of organizing all of it.”
One of Ramblin’ Sol’s CSA program members is a business consultant and web designer and he took care of some internet-related problems the couple encountered early on.
Once online orders have all come in, the couple and their staff know how much of what to pick each week and what to bring to the Brick Farmers’ Market, “so we really don’t have a lot of waste from week to week,” Conner said.
To further engage the community, they work with a local pastor who brings a crew of high school volunteers out periodically to glean excess produce for the local homeless population.
While they’ve only been at their new leased property for two years, Hannah and Joe continue to build awareness of Ramblin’ Sol Organic Farm with events at the farm.
“I think for next year we need a more full-time crew yet we have no idea how that’s going to happen with the way things are” finding workers, Hannah said.
“I need to be in the office way more than I am now,” she said, noting they are parents of an 18-month old daughter.
“Last year we would finish harvesting and packing the truck at 9 p.m. for the farmers’ market and now we’re done at 5 p.m.,’ Soto said.
“It’s been rough,” Conner acknowledged. “The work-life balance is always on our minds, so we’ve decided going forward we have to stay small to manage all this.”