Readington is where the buffalo roam 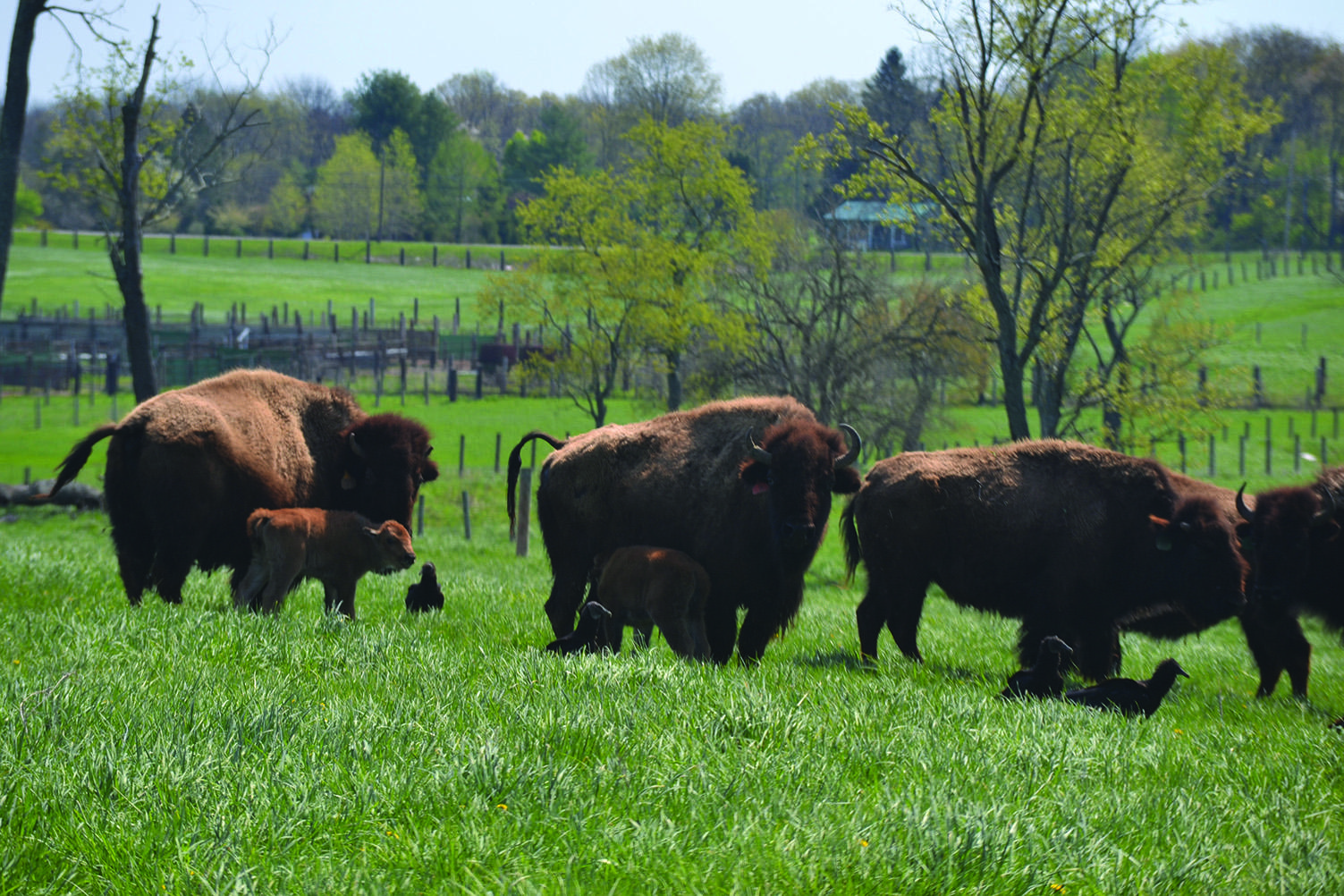 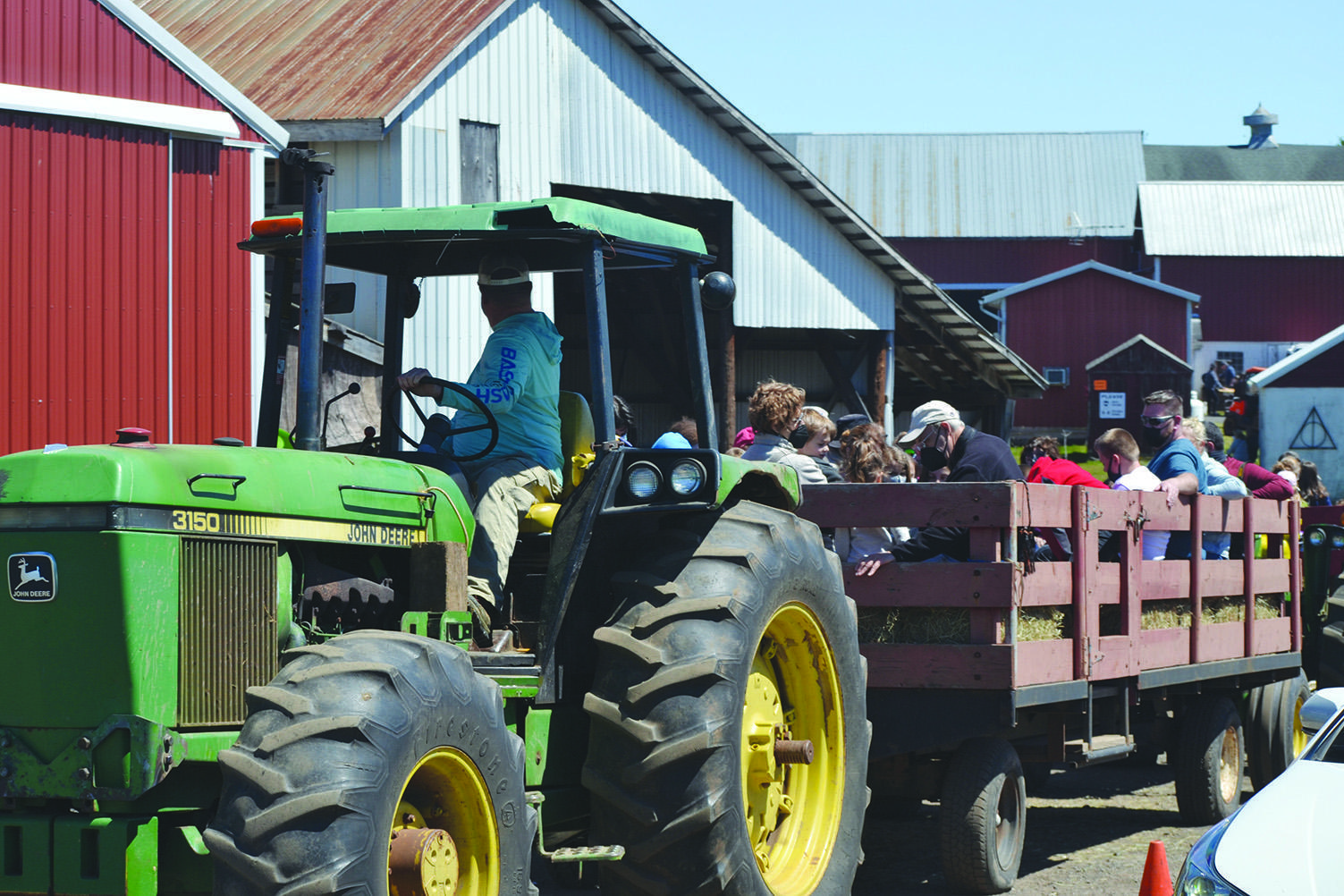 Visitors to the Readington Buffalo Farm prepare to meet the new bison babies with a wagon tour of the farm. (Photos by Jane Primerano)

READINGTON TOWNSHIP— Hundreds of visitors from Hunterdon County and beyond visited Readington Buffalo Farm on Saturday, May 1.
Their intention was to see baby bison (the “buffalo” of the farm are really bison) and they weren’t disappointed since there were four tiny ones being protected by their mothers and the other females as hayrides rumbled by.
The event is known as Red Dog Day. Red Dog is a term for baby bison. Besides the hayrides, the day featured pony rides, vendors, food and a beer barn with local craft brews available.
The incredibly cute calves aren’t the only special feature of the 235-acre farm.
Owners and operators Erick and Kristen Doyle took over what had been Erick’s parent’s hobby farm in 1998.
The elder Doyles, Gerry and Scarlett, chose bison after visiting Erick when he was living on Colorado after college.
They lived in Bedminster at the time but have since moved to the preserved farmland.
Since Erick was going to make farming his profession, he decided to do all he could to make the farm sustainable.
He took advantage of Natural Resources Conservation Service’s Environmental Quality Improvement Program to improve soil, air and water quality.
One of the most important measures was to reshape the ground to better channel ground water and slow its movement over the hilly fields.
The faster water travels the better chance it has to pick up contaminants from the soil, Doyle pointed out.
He has created both grass-lined and rock-lined channels for the water that travels toward Pleasant Run, a tributary of the South Branch of the Raritan River, which was recently named a C-1 stream.
Doyle also got assistance from the federal Fish and Wildlife agency and New Jersey Audubon. The groups provided advice and plant material to line the stream.
He also created a pond to collect runoff from 35 acres.
The pond when full is about one acre, he said, and attracts ducks and frogs and other wildlife.
Native species
“We took out invasives,” he said, mostly the ubiquitous multiflora rose, and planted native species to create a riparian buffer and thickets for wildlife. The lowland critters seem to appreciate that. Doyle said
“Audubon dropped off plants,” he said. They were grown at a state prison in South Jersey, he noted.
Many were viburnums but there are also so many elderberries he has made jelly. They even supplied trees: oaks, willows and a couple of pines.
Near the pond he planted sedges so every now and then he has to stop his tractor to let a turtle walk out of its path.
The farm has also benefitted from help from the New Jersey Resource Conservation and Development, Dolye said.
“They do a wonderful job of helping farmers facilitate programs,” he said, adding they also do a good deal of planning and behind-the-scenes work to improve the quality of the farm without an undue burden on the farmer.
NJRC&D and other groups had tables at the Red Dog Day event. Erick said he wanted visitors to see how helpful they are to farmers.
He said he holds Red Dog Day for two reasons.
“Everyone wants to see baby bison,” he noted, but he also wants to show visitors that farmers are environmentalists.
“We’ve got to convince people we are not destroying the environment by raising livestock. We are aware of the damage that can be done and we are aware what we can do to alleviate it based on science.”
When he started the projects to protect the land he was doing it for the sake of the farm but also for the benefit of the community.
Farming is a community-based industry, he said. “My first goal is to feed my neighbors.”
Doyle is enthusiastic about the bills before Congress that support small farms and processing plants.
Everyone will benefit from less trucking and less worry about verifying the source of their food, he said.
He is also enthusiastic about urban agriculture, hydroponics, growing vertically as opposed to horizontally, noting it is very environmentally beneficial.