Red Wattle Hogs prove to be worth the wait for Rowand 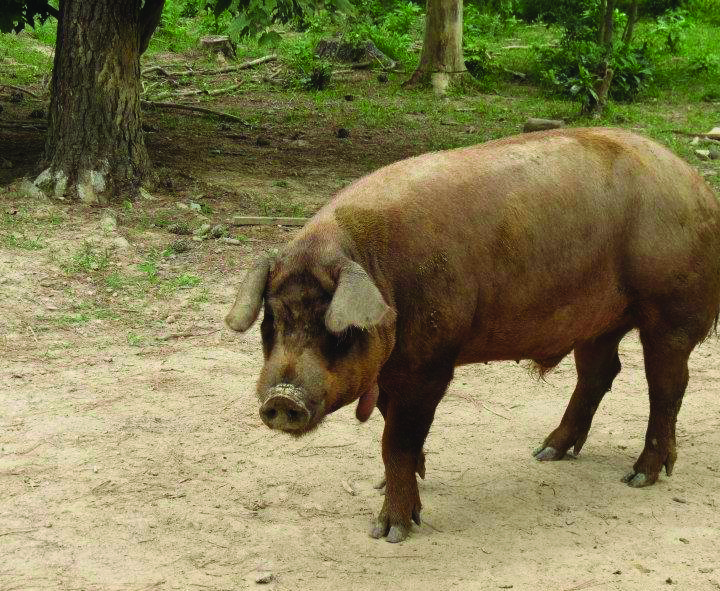 Don Rowand of R&H Farms in Lexington Park, Md., tried mixed breed heritage hogs and eventually decided upon the Red Wattle breed. “The cleaner I got the breed, the better the taste in meat,” he said. (Photo courtesy R&H Farms)

LEXINGTON PARK, Md. — Don Rowand’s farming parents always told him, “A pig’s a pig” — and then he sampled a heritage breed mix.
“You know what?” Rowand said. “I put those crosses on the grill. It was the best tasting pork I ever tasted in my life.”
Rowand has been raising heritage breed pigs at his 12-acre R&H  Farms in Lexington, Md., ever since.
As for customers, they began sampling the meat and returning to purchase the whole hog, he said.
Rowand was introduced to heritage livestock when he sought a more affordable replacement for the Yorkshire and Hampshire feeder pigs that sons Caleb, now 29, and William, 16, were growing for 4-H, he said.
A woman from Stafford County advertised on craigslist a Red Wattle mix.
The hog breed with slender nose, droopy-tipped ears and mild temperament is believed to be an import that dates to the 1800s in North America and is named for its skin color and the fleshy wattles that dangle from each side of the neck.
At $60 apiece, the mixed heritage breed boasting this lineage was less than one-half the $125 cost of a Yorkshires or Hampshire, Rowand said.
Rowand purchased several Red Wattle mixes, but said 4-H judges weren’t impressed by the breed’s arched backside, which lacked the lines they typically seek, he said.
So Rowand began securing production pigs for 4-H and seeking out the right mixed heritage breed for food.
In an attempt to achieve the best flavor, Rowand said he crossbred a Berkshire with a Red Wattle, but ultimately decided to breed pedigree Red Wattles.
“The cleaner I got the breed, the better the taste in meat,” he said.
Red Wattles stand as tall as four feet, extend as long as eight feet and are known for their hardiness, foraging activity and rapid growth, according to the Livestock Conservancy in Pittsboro, N.C.
The breed also provides good quantities of milk for large litters, the Livestock Conservancy noted.
Rowand said he found Red Wattles appealing for their juicy, tender micro-marbled meat. — meat that he said “marbles like beef, so [it] doesn’t dry out.
“It tastes like a cross between pork and beef,” he said.
Rowand raises and sells about 40 hogs per year.
He keeps the pigs in pens, feeds them a Stauffer Feed Mill sweet feed of barley, corn and molasses during mornings and nights (feeders also get oats and hay to the breeders’ root crops and acorns).
Rowand is deliberate in letting them out to graze, he said.
He provides the hogs enough feed so that they “put on a little fat” and increases the grass in order to help them “put on a whole lot of muscle,” Rowand said.
R&H soils, deficient in lime when Rowand arrived, have been remedied of the shortage, he said.
He conducts standard soil tests for calcium, magnesium, phosphorous and other minerals, he said and is careful to balance the calcium and magnesium that he said are important to pasture.
Red Wattles, despite their speedy growth,  are heritage hogs that grow to slaughter size more slowly than the average modern feeder hog.
At 8 months and 300 to 400 pounds versus what Penn State University reports is six months and around 280 pounds.
Rowand has the hogs slaughtered under what he said is USDA inspection at Haass’ Family Butcher Shop in Dover, Del., a 126-mile ride away. He trailers the live animals and returns with a freezer, he said.
Rowand’s wife, Angie, handles sales and sells direct-to-consumer at District of Columbia and Southern Maryland farmers markets such as the California Market in Lexington Park and the Fly-In Farmers Market at the St. Mary’s County Airport. R&H has clients who participate in barbecue competitions, Rowand said.
The farm is also listed on the Southern Maryland Meats website, he said.
“Right now everybody’s buying meat,” Rowand said. “They’re willing to pay the extra money [for heritage breeds] because of the taste and quality of the meat.
“This year was crazy. Basically, as fast as we could get them to the butcher, they were buying them up.”