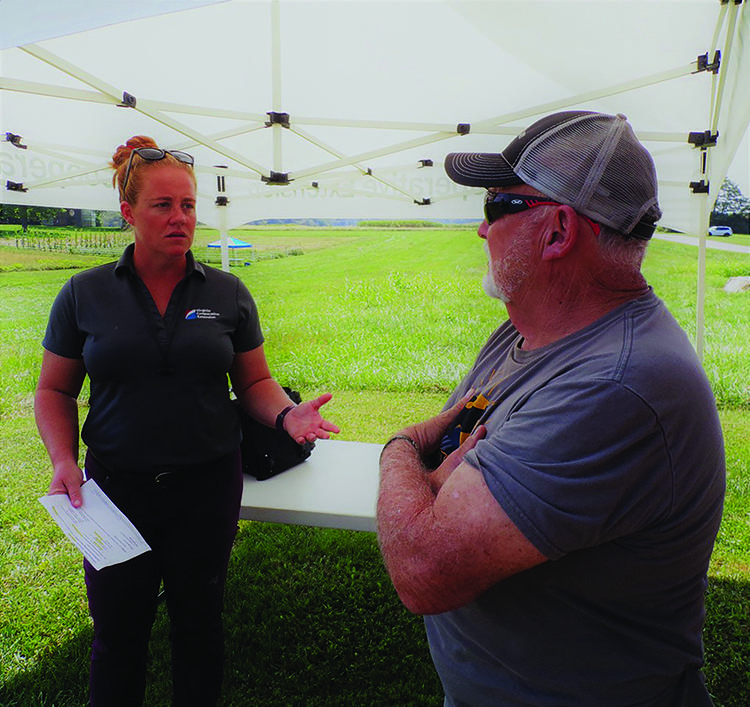 Kate Lawrence, a Virginia Cooperative Extension agent, discusses the merits of stockpiling fescue for late summer feed with Ron Testerman. Testerman and his wife traveled from True, a community in Summers County, W.Va., for the Kentland Field Day. (Photo by Jane W. Graham)

BLACKSBURG, Va. — Livestock farmers attending the first Kentland Field Day after the beginning of the pandemic learned they may be able to feed summer fescue after all. Virginia Cooperative Extension agents have done research that defies conventional wisdom that fescue is not a good choice of feed for cattle during the summer slump.
Kate Lawrence, Extension agent in Botetourt County, shared information about summer stockpiling in four concurrent sessions during the afternoon.
Lawrence’s topic with a new idea that changed thinking about one grass species is symbolic of the change that was evident in this popular Virginia Cooperative Extension Program. Even here on the tranquil banks of the New River, COVID raised its ugly head, causing change in the way things were done. Social distancing led to being spread further apart and box lunches.
The primary organizer of the event, Extension agent Morgan Paulette, who had worked for months putting the event together without being sure it could be held because of the virus, missed the big day. He was in quarantine. Several boys in his son’s class and his son had tested positive for COVID days before the field day.
Paulette’s organizational skills and his Extension colleagues’ determination made the day a success.
Approximately 140 people attended the event. These numbers were in keeping with attendance in other years. It was cancelled last year.
Lawrence’s talks were part of a program that had speakers sharing information at stations scattered across the hill here in front of the Big Barn and beyond. Wagon tours of the farm had to be cancelled because of construction of new facilities.
She explained that summer stockpiling is a system that keeps livestock off a portion of pasture in the spring and summer. This allows growth and storage of forage for late-summer and early fall grazing. It provides grazing when other fields are being allowed to stockpile fescue for the cold months.
Lawrence acknowledged that it may be a little difficult to get the cattle to eat summer fescue as it tends to be tough. She advised putting them in the chosen field or paddock and leaving them to figure out that was what they had to eat.
Once they accept the fact that they have to eat the grass before them, the cows should be fine, Lawrence indicated. She pointed to data from the research by the late David Fiske and his colleagues, Matt Booher and John Benner.
This shows that the conventional wisdom that the summer-stockpiled pasture is low in nutritional value is flawed.
Testing shows it to be adequate for beef cows at any stage of production (including early-lactation). Growing or finishing animals would require some supplementation with protein and energy.
“Forage quality analysis of summer-stockpiled pasture, with this abundant leafy undergrowth, has averaged about 12 percent crude protein (CP) and 60 percent total digestible nutrients (TDN).” she reported.” The toxic alkaloid content of summer stockpiled pasture tested no higher than what is commonly measured on conventionally grazed pasture.”