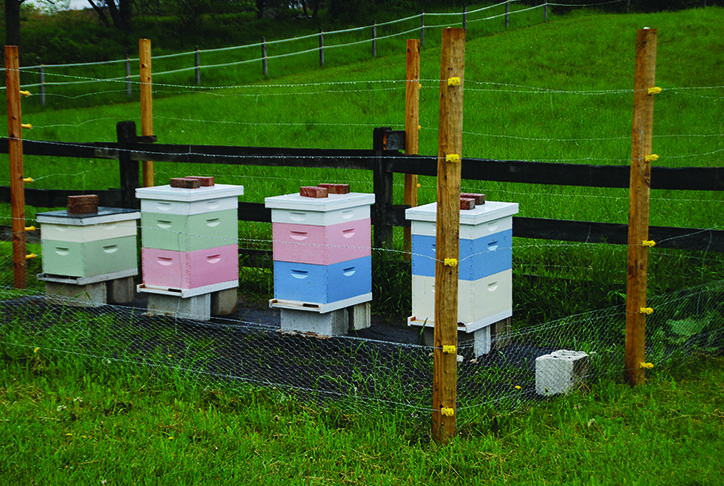 ANDOVER — Beekeepers are trying many different innovations to protect their hives from Colony Collapse Disorder with research at many colleges. Some recently published research at the Department of Entomology at Washington State University, Pullman, is showing positive results.
Researchers have long known certain fungi show great promise as pesticides because they tend to be toxic only to specific targets and non-toxic to most other organisms and also leave few residual effects on the environment. The subject of the WSU research is Metearhizium brunneum, a promising predator of Varroa destrictor. The Varroa mite is accepted as the primary cause of colony collapse because of the tendency of the mite to attack bees and damage their immune systems, making them more susceptible to some of the most destructive honey been viruses, reducing worker life span and foraging capability.
M brunneum and other forms of biopesticides have a very low toxicity to humans and other vertebrates. Their fast decomposition leads to reduced residues and less environmental impact.
According to an article in the “Scientific Reports” section of the journal Nature, researchers at WSU are using a combination of traditional selection and new directed evolution techniques to create new strains of M brunneum.
The reason for the new strains is that, like many biopesticides, M brunneum in its natural state is susceptible to heat, ultraviolet radiation and other abiotic factors.
The new strain is bioengineered to survive in the warm temperature of beehives in the United States, around 35 degrees C. Known as JH1078, appears to work better against the Varroa mite than current treatments, the article states.
Biopesticides represent a growing percentage of global pesticide usage, but are not supplanting traditional synthetic chemical pesticides except in some niche markets. The WSU researchers hope the new strain of M brunneum will help increase the use of these natural predators.
The Nature article points out the chemical acaricides currently commonly used to control the Varroa mite pose some danger to the bees. The mites also seem to be developing resistance to some of the acaricides and there is a concern about the accumulation of residues from their use.
Ray Pogwist of Monmouth County, known as Your Local Beekeeper, said he has been successful in controlling the overwintering of his hives. He feeds with thymol and formic acid and creates a drone brood to make larger spaces. He finds the Varroa mite goes to the drone brood first.
He also puts a blanket on the hives to help regulate temperatures.
He is very interested in the promising new innovation, however, since he worries about the continuing use of neocotinoids in the area of his bees and its potential for lowering their resistance to the Varroa mite.
Tim McDonald, the beekeeper on the Foodshed Alliance’s SaGE tract in Andover Township, has read about the new research into biopesticides and is hopeful.
“I lost five hives last winter,” he said. “I think it was the Varroa mite. I opened the boxes and there was nothing there.
He has 12 hives on the SaGE tract now. His hives were originally on a building, but it is being rehabilitated so he got storage containers to keep the hives safe from the larger predator that roams open land in Sussex County, the black bear.
He also has a platform at his home on Sparta Mountain in Jefferson Township, but the bears can climb it.
McDonald is excited to learn more about innovative solutions to colony collapse.
State Apiarist Meghan McConnell didn’t return several calls for information on the state’s interest in this project.