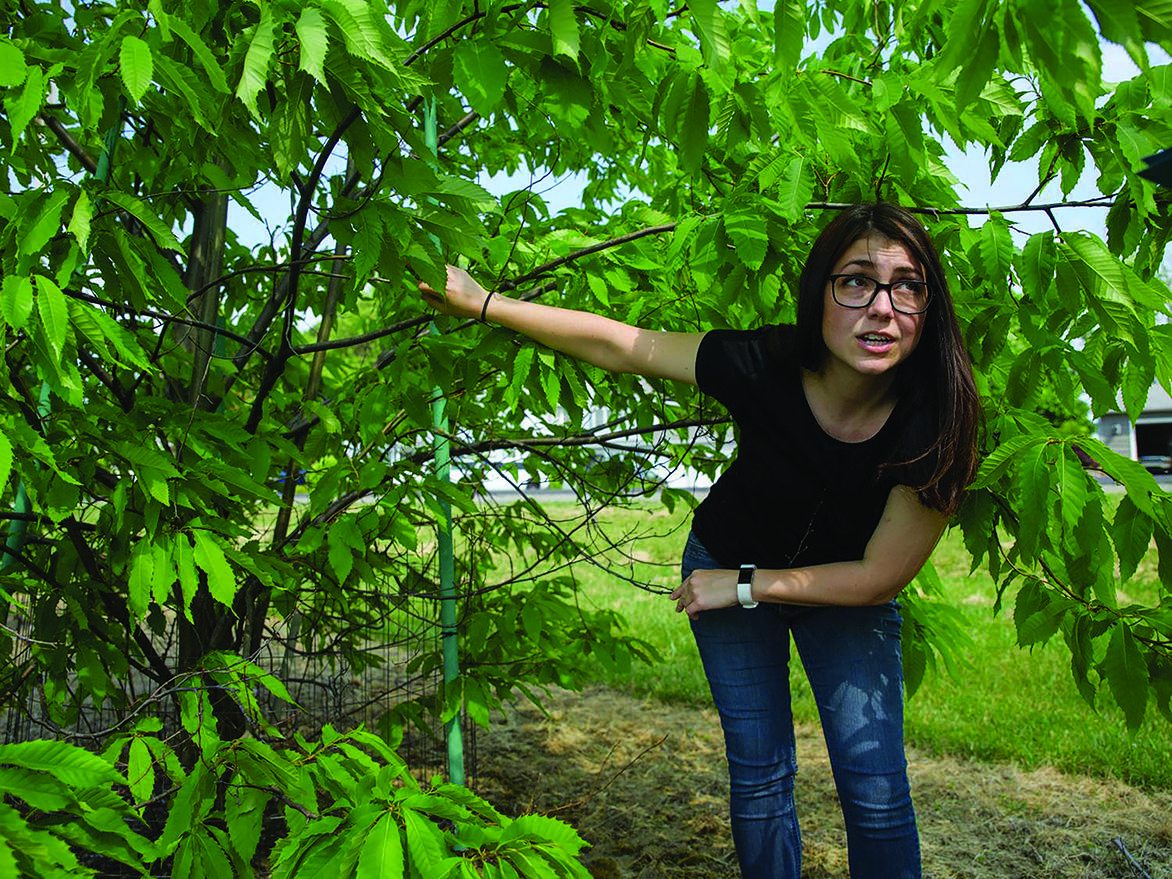 ERIE, Pa. — For lumber companies, the American chestnut was a nearly perfect tree — tall, straight, rot-resistant and easy to split. It also was prolific, sending up new shoots that grew quickly.
In the early 1900s, the species made up a substantial portion of eastern hardwood forests.
There were nearly 4 billion American chestnut trees in the United States, each growing up to 100 feet, with trunks 4 to 7 feet thick. Healthy trees lived for 400 to 600 years, producing several bushels of nuts every year.
Today, however, it can be difficult to find a healthy American chestnut. A fungal pathogen on trees imported from Japan and China wiped the species out in less than 40 years.
That loss is considered to be the greatest ecological disaster to ever strike the world’s forests.
“The pathogen is native to Chinese and Japanese chestnuts, so the two co-evolved,” said Emily Dobry, a Penn State Behrend graduate now in Penn State’s plant sciences horticulture master’s degree program.
She is doing research work at the University’s Lake Erie Regional Grape Research and Extension Center in North East.
“The American chestnut had never been exposed to it before, however, so it had little natural resistance. Think of it as smallpox for trees.”
Today, there are fewer than 1,000 American chestnut trees, largely in isolated areas outside of the tree’s historical range in the eastern half of the United States, along the Appalachian mountain ridge and throughout New England.
A few can be found at LERGREC, where researchers have been conducting a trial since 2013 with 15 chestnut trees — five each of the American, Chinese and American-Chinese hybrid species developed by scientists, all planted in one long row.
“The idea was to plant American and Chinese chestnuts side by side with some of the hybrids that have been developed, and to allow them to be challenged with chestnut blight over the years,” said Bryan Hed, a plant pathologist at LERGREC.
“Most of the trees have suffered dieback from disease, insects or weather and have had to be cut back and renewed,” he said. “The hybrid trees are notable exceptions: Three of them are currently 17 to 21 feet in height.”
Trees are renewed using sucker growth from the original rootstock.
“The American chestnut is now designated as ‘functionally extinct,’ which means that although the species still technically survives, it cannot reproduce,” Dobry said. “The shoots rarely grow large enough to produce nuts and, therefore, future generations.”
The most promising hope for the American chestnut now is probably transgenic — the development of a genetically modified tree.
Scientists are trying to engineer a tree that is as close to an American chestnut as possible, with just enough genetic material from the Chinese chestnut to resist the blight.
“Researchers have developed partially blight-resistant transgenic American chestnuts that are capable of surviving infection from the pathogen that causes blight,” Dobry said. “It doesn’t kill the pathogen; it’s still present, but it doesn’t destroy the tree.”
The current balance of species in U.S. forests could pose another problem as scientists try to reintroduce the American chestnut: The oak tree has risen to fill its place.
“It will be a challenge for the American chestnut to establish itself into the forest ecosystem again, “Dobry said.
The American chestnut could bring other problems to the forest. In 2018, while working as an undergraduate researcher at LERGREC,
Dobry discovered a fungus that was atypical for the American chestnut species.
“Initially, we assumed this was an unusual presentation of chestnut blight infection,” she said, “but after taking samples and doing research, we did not find blight, but a pathogen commonly known as chestnut brown rot.
“At the time, there had been no published report of this fungus in our hemisphere.”
Dobry continues to study the domestically isolated strain, examining whether it may be harmful to species of trees closely related to the chestnut, such as oaks.
“If this fungus proves pathogenic to oak, it could be another blow to forest dynamics,” she said. “That’s why the chestnut project and others like it are so important to protect the diversity and future of our forests.”