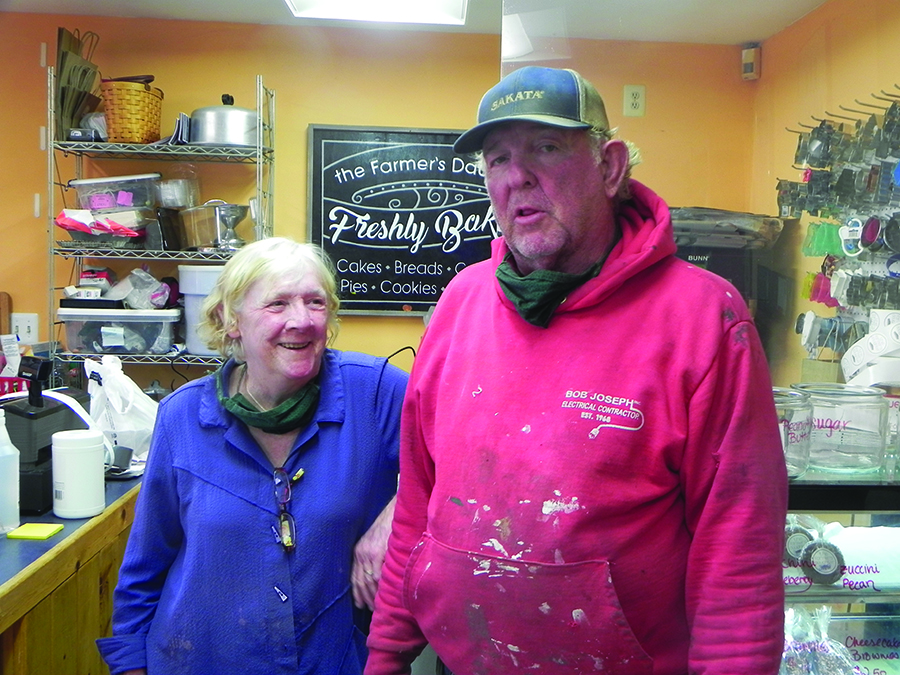 Ray Hlubik with wife Nancy stand inside Hlubik Farm’s roadside market, which has been at its current location since 1996. (Photo by Richard Skelly)

CHESTERFIELD — Ray Hlubik comes from a large, dedicated farming family, and has worked with cows, vegetables, chickens, hay and straw all of his life.
Visitors to Hlubik Farms’ roadside stand have access to free-range, grass-fed beef as well as a wide assortment of vegetables and fruits, most all of it grown on-site.
Thanks to the efforts of Hlubik’s daughter Jennifer and wife Nancy, the sell an assortment of homemade baked goods at Hlubik Farms’ retail stand.
The farm stand is located not far from the joint McGuire Air Force Base and the former Fort Dix in Burlington County.
Hlubik is one of six brothers and two sisters, and initially the whole family was located up the street. His farm stand has been in current location since 1996.
His parents, Joe and Mary Hlubik, raised eight kids on their dairy farm, along with vegetables and chickens.
All of Ray’s siblings have been involved in farm operations to greater and lesser degrees over the years, including sister Josephine, brother Patrick, sister Mary, brothers Michael, Gerard, Joseph and youngest brother Bill Hlubik, who is a Rutgers Cooperative Extension Agent for Middlesex County.
Prior to opening their expanded farm stand in 1996, “we operated out of a small stand and it was getting too busy over there,” Hlubik said.
“We didn’t have the parking we needed, and at that point my mom was still alive,” he said, adding his father Joe died in 1995 at age 79.
Hlubik and his wife Nancy live in a house on the farm.
“Just being on the farm makes it easier to get work done, if you’re working late you don’t have to drive home,” he said.
Hlubik and his family and small crew of 10 part-time employees grow about 70 acres of vegetables, most sold at their farm stand.
They grow 35 acres of sweet corn and half of that is sold at the retail stand, while he does some wholesaling with other farmers from the stand and takes the rest over to Tri-County Cooperative in Hightstown.
“The grass fed beef we sell is a little expensive compared to regular beef prices, but most of our customers are repeat customers,” he said.
“We’re kind of on a back road but we’ve built up a business over the years,” he said. “In the summer, this parking lot would be packed [on a Saturday mid-day,] and business for the whole year has been fairly good, we’ve done well.”
This year, because of the pandemic and customers complaining about a lack of good produce in area supermarkets, Hlubik said. “We decided to go down to the Philadelphia produce market and we set up regular Wednesday and Saturday pick-ups here at the market, all with little or no contact, and we followed all the safety rules.
“That carried us into late June when the tomatoes start from the tunnels and corn was a bit late this year, but business has been good because people got a better appreciation of where their produce is coming from.
Hlubik oversees operations on the 60 acres he and his wife Nancy live on, his brother Mike has another 60 acres and he leases a 17-acre parcel for hay and straw and another 44 acres nearby.
“It keeps you busy. It’s 120 acres between these two, and we’re in the Farmland Preservation program. A 200-acre vegetable farm isn’t necessarily a big farm.”
Hlubik turned 68 in October. Like many veteran farmers, he’s concerned about the future of farming in New Jersey and does all that he can to support younger farmers and in some cases, second career farmers. Hlubik graduated in 1974 from the New Jersey College of Agriculture at Rutgers, which later became Cook College and is now known as SEBS, the School of Environmental and Biological Sciences.
“Your average farmer is 62 or 63 years old now, and unless you like farming, you don’t always make enough money to make a living. It’s a way of life and you’ve got to enjoy doing it. If farmers paid themselves minimum wage, they’d get a big raise,” he said. “With all the time I put in, I don’t make minimum wage, not even close.
“You’re doing a 14 or 15 hour day seven days a week, and you do that for six months of the year.
“If you look it up, the stats are the average farmer has ability to keep between 5 and 10 percent of what he grosses,” he said, noting five percent of a million dollars is just $50,000.
That’s not a great deal of money, but between his grass fed beef cattle, corn and tomato varieties in-season, and his daughter’s bustling baked goods operation at the retail stand, the Hlubik family survives.
“I gross maybe $250,000 a year, so I’m closer to making about $30,000 a year. That’s a good year for me.”